How are epigenetic marks transmitted during cell division?

As far as I know, this is one of the biggest questions in the epigenetic field: how are the epigenetic marks like histone modifications propagated through cell division? A lot is already known about DNA methylation (e.g. as in How does “inheritance of methylation” of DNA and/or histones work?), but very little about histone modifications. What is the current state of knowledge?

I can get the ball rolling..

Found a nice paper which looks at this phenomenon in yeast.

So as a primer, 8 histone proteins come together to make a spool of sorts which DNA wraps around: 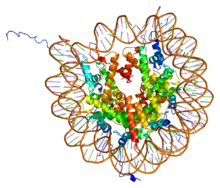 Histone proteins have many sequence variants, and each one of them can be covalently modified with methyl, acyl, phospho, SUMO, adp and many other sorts of chemical groups via a chemical bond. Although its not yet clear exactly how it works its clear that these modifications can change the behavior of the histones which prevent transcription of the gene when they have the chromosomal DNA all wrapped up.

So as to the question a pattern of inheritance of modified histone patterns is indeed seen and has epigenetic effects. (that is, it modifies the genetic phenotype of daughter cells which retain the histone modifications of the parent cells). In this paper, newly synthesized (and labelled) yeast histone can be found incorporated into certain segments of the genome, which demonstrates that large segments of the histones are carried forward from the parent cell.

Furthermore, if the heterochromatin-binding protein Sir3 is unavailable during DNA replication, histone H3-K4

So there's evidence that histone configurations are transmitted epigenetically, In this 2011 paper, the author support a 'conservative distribution model' and compare it to a 'semi-conservative' model:

The semi-conservative distribution model proposes that a hybrid nucleosome that contains both newly synthesized and parental histone H3-H4 dimers is formed, which facilitates the transmission of epigenetic information within the basic nucleosome unit.

They go on to say that a conservative model of histone inheritance allows for strong epigenetic inheritance as the remaining parent histones will tend to attract similarly labelled histones as the new histones incorporate themselves among the parental histones on the daughter chromosome.

Its still being worked out though...

Not the answer you're looking for? Browse other questions tagged genetics epigenetics histone histone-modifications or ask your own question.

6
How does "inheritance of methylation" of DNA and/or histones work?
1
Have researchers discovered how epigenetic information is passed down during cell division?

21
Regulation of chromatin structure
6
How does "inheritance of methylation" of DNA and/or histones work?
7
In what sense is the "histone code" a code?
4
SNPs in DNase hypersensitive and histone marks sites
4
Genetic Imprinting and Cell differentiation
2
What is the relationship between induction of cell differentiation and DNA methylation status?
0
What’s so remarkable about position effect variegation?