This is a biology+physics question. Since there is no biology section, I am asking here.

In brain, when a neuron reaches to threshold value, it fires an action potential. In most graphics, that is shown as 40 mV. An example is 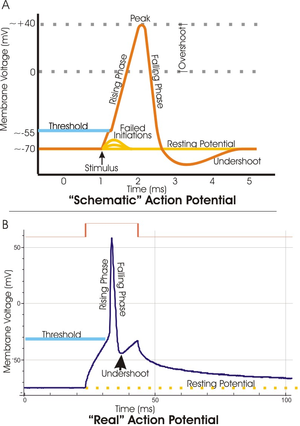 Neuron's this potential reaches to all synapses where this neuron is connected to, and chemically transferred to other neuron and transformed into electric charge again.

My question is, because in artificial models not shown, if that whole 40 mV is distributed to those synapses according to synapse strengths, or do all synapses take a total 40 mV which is like creating a potential while it is not there?

Another small question is if the collected potential is stored in neuron if it cannot reach to threshold value like a capacitor in circuit? 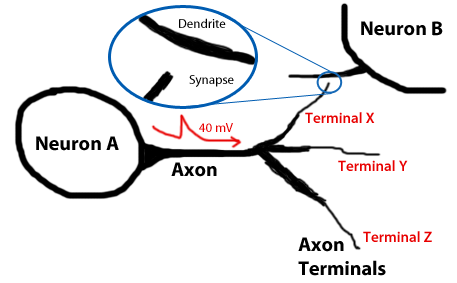 I think you are really wondering how axonal morphology affects the voltage along the axon. The short answer to your question is that each synaptic terminal sees the same voltage because that voltage is generated "fresh" at each site. This has nothing to do with synaptic strength, which determines the amount of voltage deflection in the postsynaptic terminal but not in the presynaptic terminal.

The axon has two major properties that allow for this even activation across its branches. First, as @Armatus said, the axon is an active structure, meaning that the action potential (AP) regenerates as it travels along the axon. This means that there is essentially no decay of the voltage as the AP propagates.

Second, the axonal geometry appears to be carefully regulated. As you seem to have guessed, there has to be sufficient current flow to activate an action potential in the neighbouring patches of membrane or else there is a propagation failure and the AP stops. This is a problem at axonal branch points (see Box 1 in Debanne, 2004), where the diameters of daughter branches have to be correctly sized so that there is little or no extra electrical load. (For instance, if one branch stays the same size as the mother, the other branch is an extra load that will "steal" current and leave less current travelling down the mother branch). Recent work using voltage-sensitive dyes have shown that in mammalian neurons, in practice, propagation failures are rare (Foust et al, 2010). This suggests that there is fine regulation to ensure that the geometry is "just right." (Those "just right" rules are basically governed by cable theory, which I've previously described here.)

To your last question, yes, there is time-dependent decay of subthreshold potentials because the membrane is a capacitor (~1 uF / cm^2). I wouldn't call this "storage" exactly, but it does work just like a capacitor in a circuit. Many people think of the membrane as a capacitor and a resistor in parallel.

Action potentials are governed by the ion concentrations on different sides of the membranes. When an AP is triggered locally, it spreads because the ions which travel across the membrane during the AP spike diffuse to neighbouring regions and trigger the same response in the ion channels there.

Hence, it is irrelevant where an AP is, it is always the same voltage. The 40mV are not "distributed" at all - they diffuse and cause new depolarisations around them, triggering new 40mV potentials until they reach the neuron terminals. So in a way, yes, the AP propagates by "creating a potential while it is not there". All terminals will have the same 40mV potential (the exact voltage of course may be different between cell types).

Potentials which do not reach the threshold value are stored to some extent. This is in the sense that potentials around neurons are always established by ion gradients - a potential in your sense means a change in concentrations from the resting state. Until the concentrations are normalised again by the various transport mechanisms for ions across the membrane, the potential across the membrane will remain changed and it may be closer or further away from the AP threshold.

What they don't show there very well is that the action potential signal does not travel like a voltage on a wire, but as a propagating chemical condition.

At the synapse, how strongly the connection is made to the next neuron is addressed in the 'long term potentiation' module.