At the peak of the graph, is the concentration of Na+ outside the cell more than inside? That must be to overcome the electrical force in the opposite direction.

When is the concentration of Na+ greatest inside the cell? At the peak assuming the Na+ channel close immediately at it then it is also greatest at 3. If there is still passage of Na+ then 3 is the maximum. Is this true or false?

Below is a schoolbook example of the membrane potential combined with the individual conductivities of Na+ and K+ during an action potential (AP) (Fig. 1); 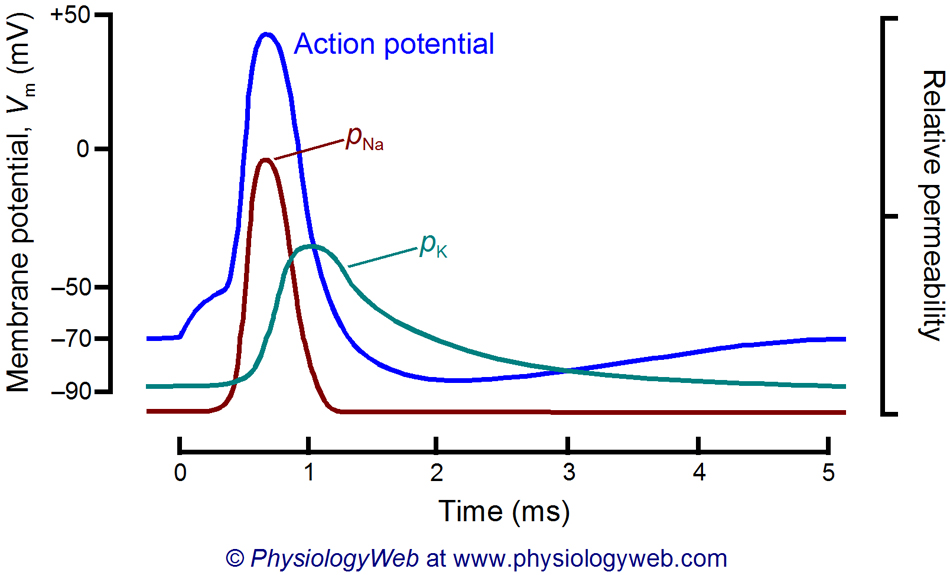 And in Fig. 2 is an example of the currents of Na+ and K+ during an action potential (AP) (Fig. 1). Note that K+ stays high due to amanipulation of ion concetrations.

However, you ask about the concentrations of Na+ in the cell. As far as I know, this has not been investigated directly. Intracellular Ca2+ concentrations, for example, can be imaged with various imaging techniques, but absolute Na+ and K+ concentrations have to be measured with intracellular electrodes. So while the conductivities and the currents are depicted quite clearly in the above figures, they do not show the absolute concentrations of Na+ or K+ and I doubt it can be found anywhere in the literature. It can of course be mathematically deduced, by calculating the number of ions entering the cell using the Nernst equation and correcting that for the background effect of the sodium-potassium pump and other factors that alter Na+ concentration in the cell (protein transporters and what not). It will at least give an approximation of [Na+]i.

Not the answer you're looking for? Browse other questions tagged neuroscience electrophysiology or ask your own question.

6
Why is it possible to calculate the equilibrium potential of an ion using the Nernst equation from empirical measurements in the cell at rest?

5
Action potential and sodium channels
9
What keeps the resting potential of neurons constant at -70 mV?
4
Are Gram negative bacteria classified as such because of their negative membrane potential?
5
How does a change in the potential across a neuron's membrane get turned into a signal that is sent down the axon?
5
If the average resting potential of a neuron is -70 mV, why is there such a high ratio of potassium ions inside relative to out?
4
Doubling the concentration of extracellular calcium hyperpolarizes a neuron. Why?
3
Visual phototransduction, neurons depolarization when no light: why?
2
Ambiguity about the relation between membrane potential and concentration gradient in neuron cells
1
What is happening at the electrode interface when the electrical field is modified due to the change of ion concentration after an AP?