Why are there no Nissl bodies in the axon?

What could be the significance of not having Nissl bodies (endoplasmic reticulum) in the axon hillock (a part of the cyton) and axon? Does it have something to do with the processing of action potentials?

What prevents Nissl bodies from entering the axon hillock even though they can enter dendrites (which are much narrower)?

Molecularly, Nissl bodies are the densely clustered ribosomes on the ER. The basophilia is due to the RNA in the ribosomes. The question you have raised is a very significant one. For perspective, I quote a book Fundamental Neuroscience, 2002 (2002 is pretty old for neuroscience!)

The hillock is a region where materials either are committed to the axon (cytoskeletal elements, synaptic vesicle precursors, mitochondria, etc.) or are excluded from the axon (RER and free polysomes, dendritic microtubule-associated proteins). The molecular basis for this sorting is not understood. Cytoplasm in the axon hillock does not appear to contain a physical "sizing" barrier (like a filter) because large organelles such as mitochondria readily enter the axon, whereas only a small number of essentially excluded structures such as polysomes are occasionally seen only in the initial segment of the axon and not in the axon proper.

But a recent paper GG Farias et al. 2015, proposed the presence of a special area in the axon hillock known as the Pre Axonal Exclusion Zone (PAEZ) that tries to explain this polarized sorting by differential binding of microtubule motors. 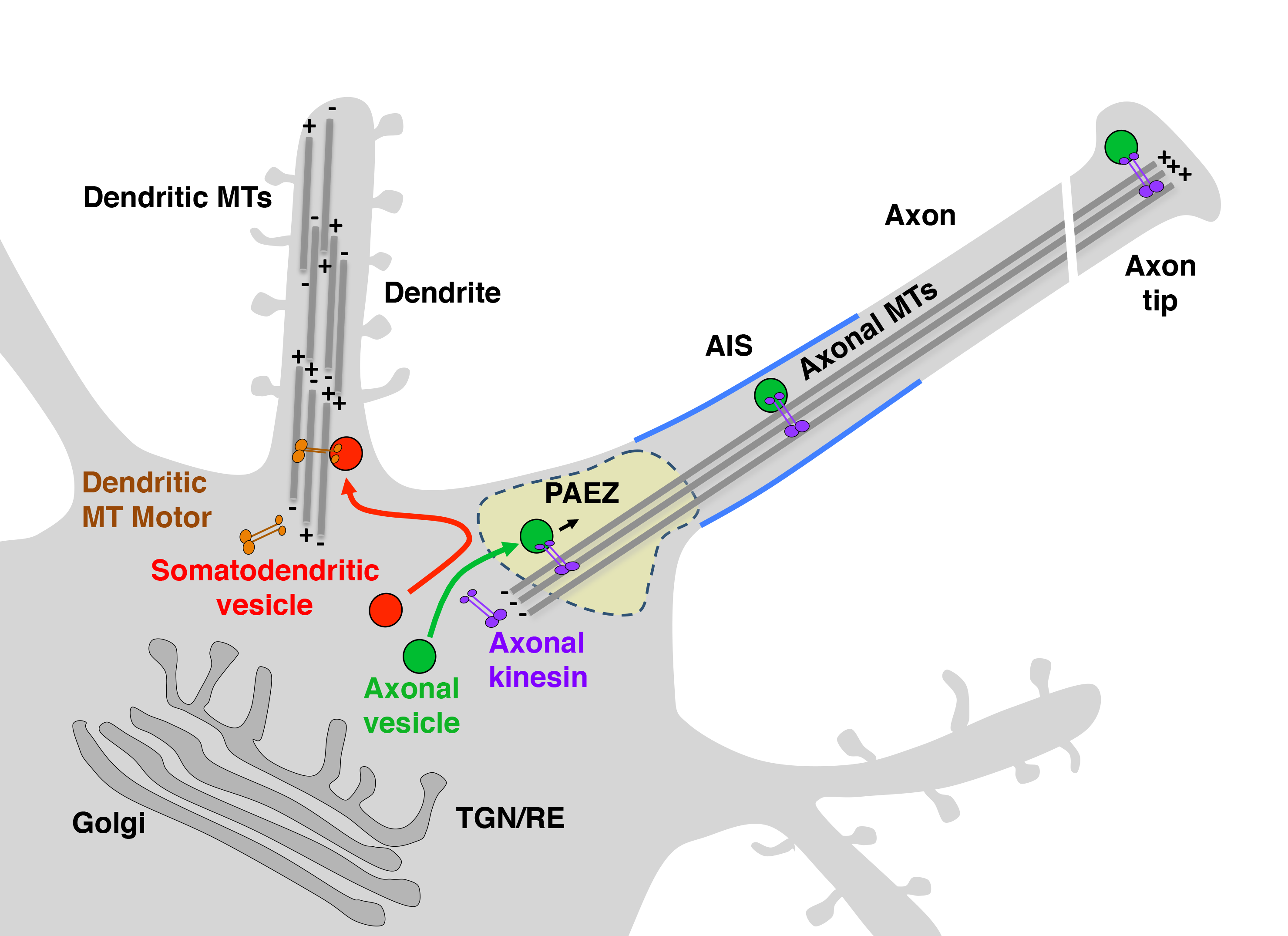 Although the paper mainly talks of the sorting of axonal and somatodendritic vesicles as seen in the picture, they also seem to apply for the RER which actually are the basis for Nissl's granules.

Well, as you might have understood by now, it's not a matter of the size of the axon/ dendrite since same sized vesicles are being diverted in either direction and as previously mentioned, even mitochondria enter the axon.

Not the answer you're looking for? Browse other questions tagged cell-biology neuroscience histology or ask your own question.

9
How does an inhibitory synapse communicate to the cell body of a neuron?
28
Why is saltatory conduction in myelinated axons faster than continuous conduction in unmyelinated axons?
4
Neurons with thousands of connections: where are the extra connections coming from?
9
Single long axon vs serial neurons
4
Differences between synaptic connections
11
At what point during an action potential are the sodium potassium pumps working?
1
Excitability of neurons
1
Significance of Nissl bodies
2
Can below-threshold potential changes of neurons convey information?