Do DNA viruses have their own DNA dependant DNA polymerase?

There's an exception to the rule that all DNA viruses need to get to the nucleus in order to replicate. Poxviruses do not require to get into the nucleus because they can make protein from their very own DNA-dependant-RNA-polymerase.

That is fine. But then, how do they make new DNA (for daughter virions)? Do they also have their own DNA-dependant-DNA-polymerase?

So here are my questions -

I know that's a lot of questions! Hope someone does help.

Probably I won't be able to answer all of your questions satisfactorily, but let's begin one by one.

Yes. See this article from Wikipedia:

The replication of poxvirus is unusual for a virus with double-stranded DNA genome (dsDNA) because it occurs in the cytoplasm, although this is typical of other large DNA viruses. Poxvirus encodes its own machinery for genome transcription, a DNA dependent RNA polymerase, which makes replication in the cytoplasm possible. Most dsDNA viruses require the host cell's DNA-dependent RNA polymerase to perform transcription. These host DNA are found in the nucleus, and therefore most dsDNA viruses carry out a part of their infection cycle within the host cell's nucleus.

Some viruses also encode special DNA polymerases, such as Hepatitis B virus DNA polymerase. These may selectively replicate viral DNA through a variety of mechanisms. Retroviruses encode an unusual DNA polymerase called reverse transcriptase, which is an RNA-dependent DNA polymerase (RdDp). It polymerizes DNA from a template of RNA.

Another example, as mentioned by @David in comments, is the Herpes simmplex virus (HSV) which contains a bunch of its own enzymes for DNA replication on its own. See this article:

Umm, both. Viruses (generally; there might be exceptions) need to reach to the nucleus of host to replicate as well as transcribe their DNA. See this article (emphasis mine):

Most DNA viruses replicate in the cell nucleus, which is where cellular replication and transcription proteins are localized. After infection, the nucleocapsid of DNA viruses is therefore usually delivered to the nucleus where uncoating occurs. An exception is poxviruses, which replicate in the cytoplasm of infected cells.

The first stage in the viral replication cycle is expression of the viral early genes. Transcription of these genes occurs using cellular RNA polymerase II and cellular transcription factors. These proteins bind to the viral DNA in regions called early promoters/enhancers, and promote synthesis of the early pre-mRNAs.

I think it has already been answered in your 2nd question. No, and the exception is the poxvirus itself. Again see the same article (emphasis mine):

Wait! There's a difference between being inside the host cell's nucleus and being integrated into the host genome. Integration of the viral genome into the host genome requires a special enzyme called integrase and, you know, DNA viruses don't have integrase because they don't need it. So your question can be changed a bit to Are there viruses which replicate inside the cell's nucleus by getting integrated into the genome? Now, I could find only one such example i.e. Ectocarpus siliculosus Virus (EsV).

Ectocarpus siliculosus virus-1 (EsV-1) is a lysogenic dsDNA virus belonging to the super family of nucleocytoplasmic large DNA viruses (NCLDV) that infect Ectocarpus siliculosus, a marine filamentous brown alga...the EsV-1 and FirrV-1 genomes encode a large putative integrase/recombinase for which no counterpart exists in current protein databases. Only the Tyr-recombinase domain at the carboxy terminus of this enzyme is similar to phage integrases. Therefore, this enzyme might be involved in the integration and/or recombination of the integrated viral fragments. 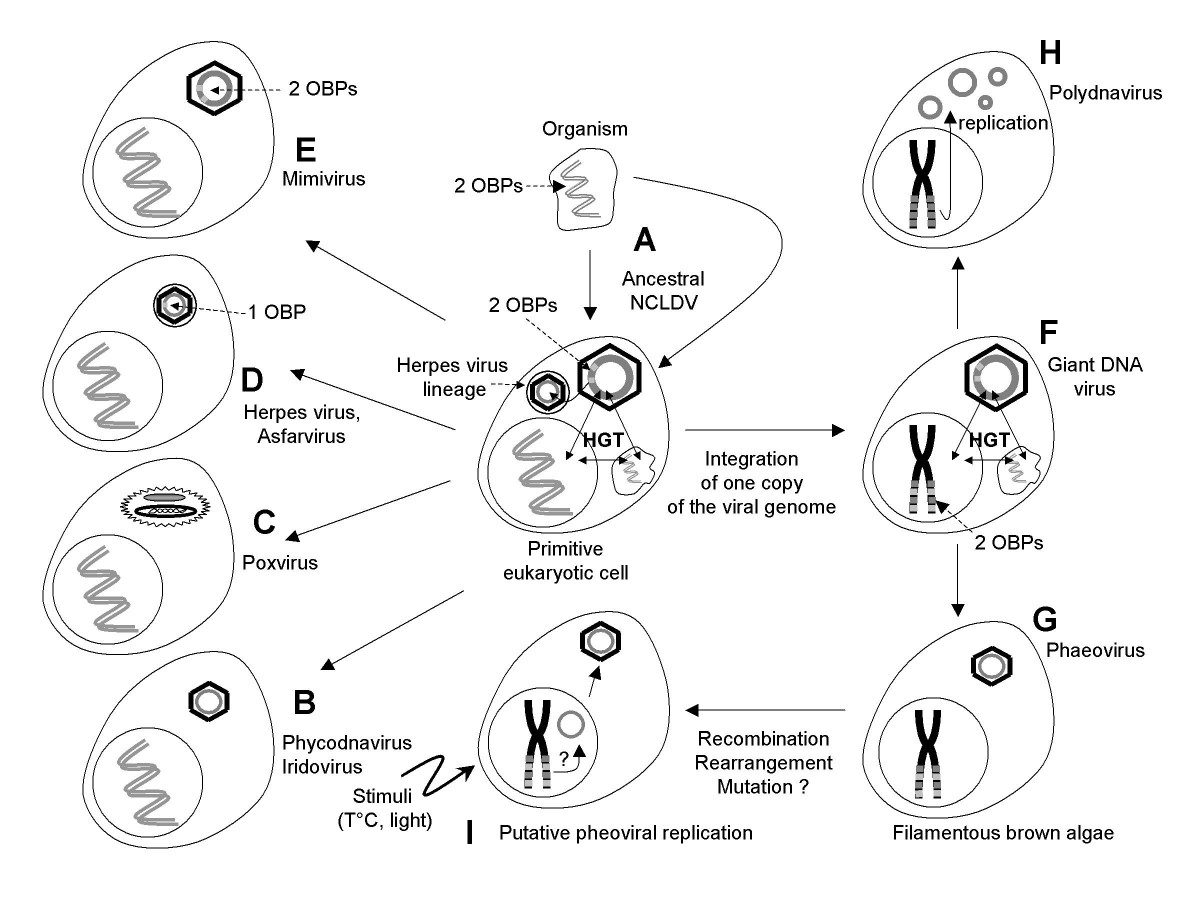 7
Can we attack viruses by attaching proteins and such to their shells?
2
Why do retroviruses go through a DNA stage to replicate their RNA genome?
3
Pox virus infection process
4
Are there any viruses that integrate their DNA into organellar DNA?
0
Are viruses ever manufactured directly from viral DNA embedded in the genome?
1
How do DNA viruses keep themselves in the nucleus without inserting themselves into genome?
0
Can CRISPR also remove DNA viruses?
2
Can viruses grow?
5
Where does (retro)virus replication take place?