How is NAD+ used in lactic acid fermentation after it is oxidized from NADH?

I am confused with the whole process of glycolysis and the fate of the products of this reaction. So, I understand that anaerobic glycolysis results in 2 pyruvate + 2 NADH and 2 net ATP. Is the whole anaerobic purpose of glycolysis to make the 2 net ATP? Then pyruvate and NADH are waste products? Also, pyruvate then reduces to lactic acid. What is the need for this? NADH is oxidized to NAD+. How is NAD+ used? Also, lactic acid is eventually converted back to pyruvate through Cori cycle. How is that pyruvate used?

As this question refers to glycolysis in the context of lactic acid fermentation it clearly relates to anaerobic glycolysis, which is why I added that to the question.

I believe it is correct to regard the primary purpose of anaerobic glycolysis as being to generate ATP for the anaerobic organism or tissue.

To understand the roles of NAD and lactate in this process you need to consider the chemistry. The conversion of glucose to pyruvate is an oxidative process, with the oxidizing agent being NAD+, which itself is reduced to NADH. For glycolysis to continue the NADH must be reoxidized to regenerate NAD+. This is the primary purpose of the reduction of pyruvate to lactate and is summarized in my own diagram, below. 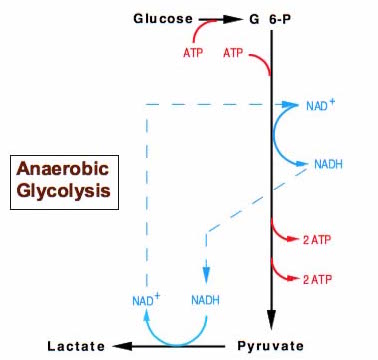 So, the answers to your (paraphrased) questions “what are NAD and lactic acid needed for?” and “are they waste products?” are:

The so-called cycle of Cori & Cori

In my opinion it is best to approach glycolysis as I have done above, without reference to the tissue or organism, so as to understand the essential features of the process.

In the specific case of mammals, some tissues perform glycolysis anaerobically, e.g. the red blood cell (which lacks mitochondria) or rapidly excercising muscle (where the blood supply and number of mitochondria are not sufficient to generate ATP for muscle contraction. The liver, in contrast, has a plentiful supply of oxygen and hence NAD+, and so can reoxidize lactate to pyruvate if the former is transported in the blood from the anaerobic tissue to the liver, salvaging the carbon skeleton.

Under conditions of low blood sugar (e.g. starvation) it is important that the pyruvate be reconverted into glucose in the liver by gluconeogenesis, rather than be converted to other products, and the glucose is released into the blood. In this case one goes full circle, this process is generally referred to as the Cori Cycle. I always avoided this term myself in teaching students as I found it caused confusion with cycles such as the tricarboxylic acid cycle and the urea cycle, where all the chemical interconversions take place in the same tissue.

Under aerobic conditions (e.g. in the liver after a carbohydrate meal) the purpose of glycolysis is not primarily to generate energy but to utilize the glucose, storing it as fat (after glycogen capacity is reached) or using it to synthesize intermediates. There are different fates for the pyruvate (acetyl-CoA is shown), but lactate is not one of them as the NADH can be reoxidized far more efficiently in the mitochondria, with molecular oxygen being the ultimate oxidizing agent.

Berg et al. Section. 16.1 covers glycolysis in great detail under aerobic conditions. The lactic dehydrogenase reaction is given little emphasis, but can be found in section 16.1.9.

The whole purpose of glycolysis is to make the 2 net ATP, right?

No, actually it's breakdown of glucose as the name suggests, so as to provide pyruvate, whose fate depends on cells need and environment.

Then pyruvate and NADH are waste product?

Why? They are just intermediates which can be utilised in tca, or cori cycle or in any other metabolic pathways as cell needs.

Also, pyruvate then reduces to lactic acid. What is the need for this? NADH is oxidized to NAD+......

The production of lactate is beneficial because it regenerates NAD+ (pyruvate is reduced to lactate while NADH is oxidized to NAD+), which is used up in oxidation of glyceraldehyde 3-phosphate during production of pyruvate from glucose, and this ensures that energy production is maintained and exercise can continue. (During intense exercise, the respiratory chain cannot keep up with the amount of hydrogen atoms that join to form NADH, and cannot regenerate NAD+ quickly enough.) The resulting lactate can be used in two ways: Oxidation back to pyruvate by well-oxygenated muscle cells, heart cells, and brain cells Pyruvate is then directly used to fuel the Krebs cycle Conversion to glucose via gluconeogenesis in the liver and release back into circulation; see Cori cycle If blood glucose concentrations are high, the glucose can be used to build up the liver's glycogen stores.

Also, lactic acid is eventually converted back to pyruvate through Cori cycle. How is that pyruvate used?

In cori cycle lactate is finally converted to glucose via intermediate- pyruvate. 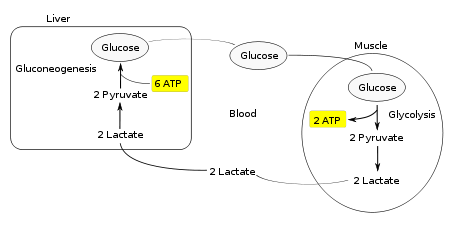 In response to comments , relation between glycolysis and fermentation:

2
What do different fermentation products have in common?
1
What is the fate of NADH produced in the liver during oxidation of lactic acid?

18
Why is a lack of oxygen fatal to cells?
4
Cellular Respiration/Fermentation Problem Leading to Lack of Energy
3
Is glycolysis the beginning part of fermentation, or does fermentation follow glycolysis?
1
What is the fate of NADH produced in the liver during oxidation of lactic acid?
8
Why is carbon dioxide produced in alcohol fermentation but not in lactic acid fermentation?
2
Does Glycolysis produce lactate, or pyruvate?
1
What triggers the switch between aerobic and anaerobic respiration?
4
Is pyruvate considered a high energy molecule like ATP or NADH?