Why do bacteria produce H₂O₂?

I recently read up that people with NADPH oxidase deficiency (Chronic granulomatous disease CGD) have a tendency to be infected by Catalase positive organisms. 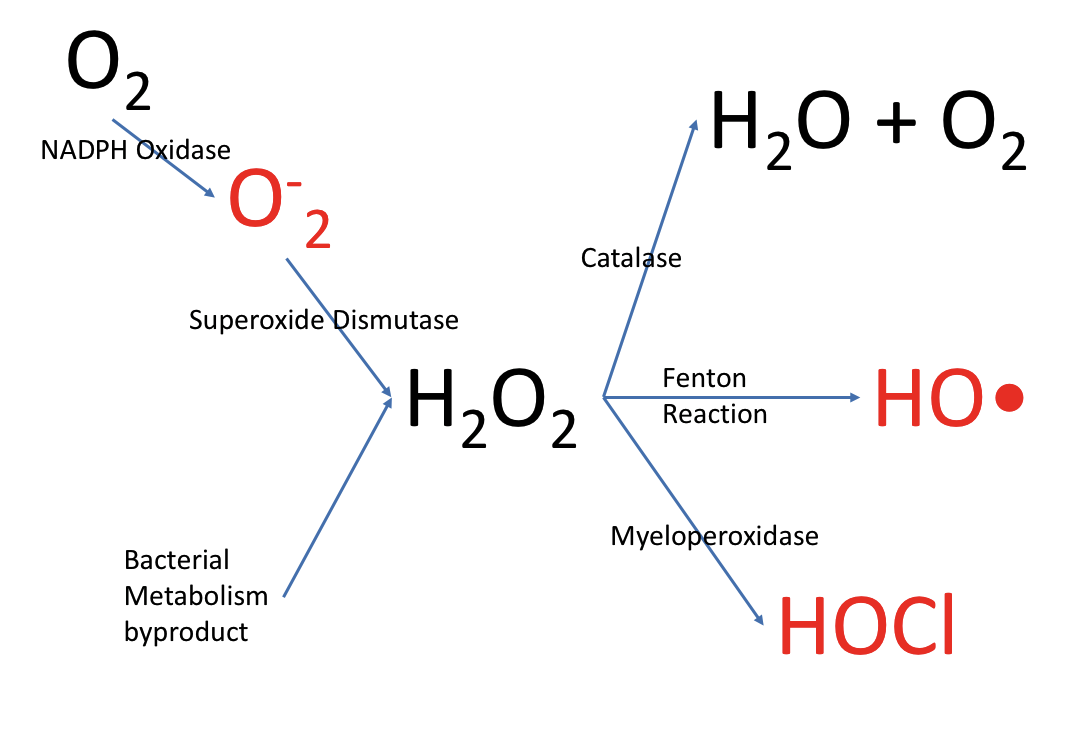 NADPH oxidase helps produce the $H_2O_2$ via superoxide that is required by other enzymes to kill the bacteria.

Case 1: In the phagoloysozome, when there is a deficiency of NADPH oxidase, catalase positives can clear off the $H_2O_2$ they produce, thereby stopping production of free radicals via Fenton and myeloperoxidase. The bacteria survives and hence causes symptomatic infection in CGD patients.

Case 2: On the other hand, since catalase negative organisms can't clear off the $H_2O_2$ they produce, they remain susceptible to the free radicals produced by other enzymes like Myeloperoxidase and Fenton reaction, which would still kill the bacteria. In short, the bacteria 'lend' the $H_2O_2$ which feeds into these reactions leading to its own death. Hence, CGD patients can fight off catalase negative organisms.

My question is, why do the bacteria produce $H_2O_2$ in the first place? Is it produced only by aerobic organisms? If so, why would there be organisms that produce $H_2O_2$ and still not have a catalase (as had happened in case 2)? Isn't $H_2O_2$ is harmful even in the absence of free radical producing enzymes since the Fenton reaction is a non-enzymatic reaction?

why does the bacteria produce H2O2 in the first place?

It is produced by all organisms as a byproduct of respiration. See this wikipedia article: 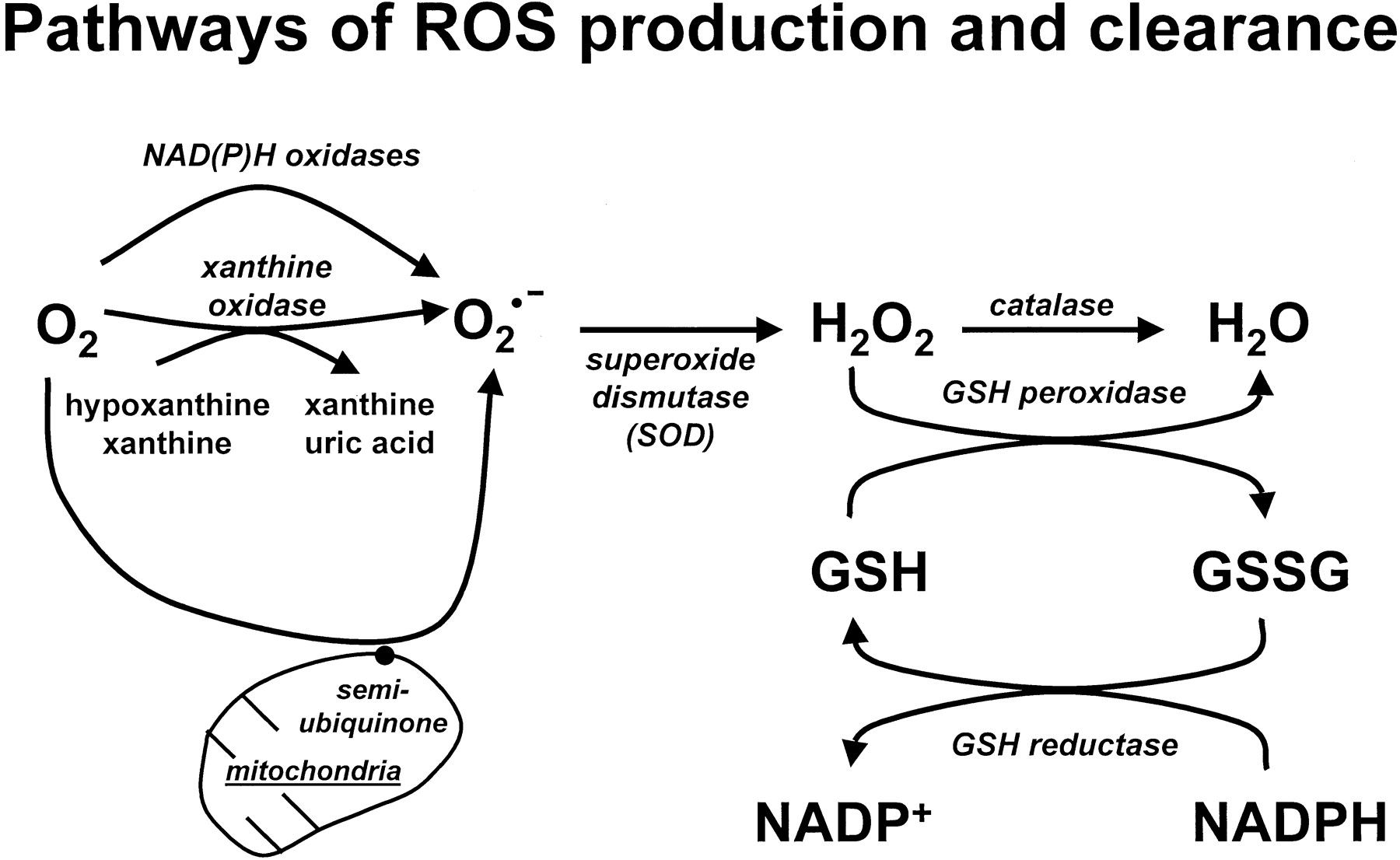 But, it has some useful functions too! One of those, as you mention, is in immunity through NADPH oxidase, but there are some more! From the same above wikipedia article:

These ROS are important in the normal functioning of cells, playing a role in signal transduction and the expression of transcription factors.

For this line, wikipedia cites 3-4 articles, one of which is this:

The OxyR transcription factor is sensitive to oxidation and activates the expression of antioxidant genes in response to hydrogen peroxide in Escherichia coli. Genetic and biochemical studies revealed that OxyR is activated through the formation of a disulfide bond and is deactivated by enzymatic reduction with glutaredoxin 1 (Grx1). The gene encoding Grx1 is regulated by OxyR, thus providing a mechanism for autoregulation.

It is not produced by obligate anaerobic bacteria and that is why they are very sensitive to oxygen. See this article:

Obligate anaerobes are microorganisms killed by normal atmospheric concentrations of oxygen (20.95% $O_2$)...Because molecular oxygen contains two unpaired electrons in its outer orbital, it is readily reduced to superoxide ($O_2^−$) and hydrogen peroxide ($H_2O_2$) within cells. Aerobic organisms produce superoxide dismutase and catalase to detoxify these products, but obligate anaerobes produce these enzymes in very small quantities, or not at all.

If so, why would there be organisms that produce H2O2 and still not have a catalase (when the bacteria is outside, not in the phagosome)?

Logically, no. Producing $H_2O_2$ but not being able to handle it would be like suicide for any organism. Also, I could not find any example of bacteria which lack catalase but still produce hydrogen peroxide. However, if you talk about spontaneous formation of $H_2O_2$ from $O_2$ or spontaneous conversion of $H_2O_2$ to $OH^-$ or $H_2O$, then there could be many examples.

Isn't H2O2 is harmful even in the absence of free radical producing enzymes since the fenton reaction is a non-enzymatic reaction?

I think you have used some inappropriate words here; you probably mean free radical metabolizing enzymes (like catalase or superoxide dismutase) instead of free radical producing enzymes. And you probably want to say that $H_2O_2$ can also affect bacteria through fenton's reaction even in the presence of such enzymes (correct me if I'm wrong here).

You are partially correct. It should damage the bacteria, but, as you know, bacteria are ever-evolving and have already found a way to counteract this. First, lets see how fenton's reaction works. See this:

After addition of the iron and the hydrogen peroxide, they are going to react together to generate some hydroxyl radicals as it shows in the following equations:

During the Fenton's reaction all the parameters are adjusted to promote the two first kind of reaction between the pollutant and the hydroxyl radicals.

Now, lets see how the bacteria tackles this. See this:

While E. coli Dps can store iron, it prefers to use $H_2O_2$ rather than $O_2$ as an oxidant (Zhao et al., 2002). This suggests that the primary role of Dps in E. coli is to protect DNA against the potential damage of hydroxyl radical produced by the Fenton reaction, rather than an iron storage function. Although an iron storage Dps-like ferritin was found in the gram-negative bacterium Listeria innocua (Bozzi et al., 1997), recent studies have shown that it is indeed a Dps protein, which attenuates the production of hydroxyl radical by Fenton chemistry: DNA cleavage assays showed that the protein, while not binding to DNA itself, protects it against the deleterious combination of $Fe^{2+}$ and $H_2O_2$ (Su et al., 2005). It seems likely that the principle role of this family of proteins is a DNA protecting anti-redox agent (Chiancone et al., 2004).

EDIT: Now, as you asked in comments:

how catalase negative organisms manage with the H2o2 they produce

read the following paragraph from this article (emphasis mine):

Under different growth conditions we found that both L. plantarum ATCC 8014 and a catalase-positive strain, T-1403-5, were capable of utilizing $0_2$, particularly during the late stages of growth. This suggested the need for enzymes which would protect the lactobacilli from $H_20_2$ and $0_2$ which might be formed. Superoxide dismutase was present at low but constant levels in both catalase-positive and catalase-negative strains. NADH peroxidase was present in strain 8014 and this enzyme increased in specific activity as the cells aged and entered the period of increased $0_2$ uptake. The presence of this enzyme should protect the organism against toxic effects of $H_20_2$ in the absence of catalase production. In strain T-1403-5 this role can be performed by the very active atypical catalase, although this strain may also possess the peroxidase. When growth rates of the catalase-negative and catalase-positive strains were compared, the rates of the catalase-negative strains were greater than that of the catalase-positive strain. Therefore, it did not appear that the possession of catalase conferred any advantage on strain T-1403-5.

Or see another article on Streptococcus pneumoniae:

Aerobic growth of Streptococcus pneumoniae results in production of amounts of hydrogen peroxide ($H_20_2$) that may exceed 1 mM in the surrounding media...The mechanisms allowing S. pneumoniae, a catalase-deficient species, to survive endogenously generated concentrations of $H_20_2$ that are sufficient to kill other bacterial species is unknown. In the present study, pyruvate oxidase (SpxB), the enzyme responsible for endogenous $H_20_2$ production, was required for survival during exposure to high levels (20 mM) of exogenously added $H_20_2$...Thus, SpxB is required for resistance to the toxic by-product of its own activity. Although $H_20_2$-dependent hydroxyl radical production and the intracellular concentration of free iron were similar to that of Escherichia coli, killing by $H_20_2$ was unaffected by iron chelators, suggesting that S. pneumoniae has a novel mechanism to avoid the toxic effects of the Fenton reaction.

From the same article's Discussion heading (there are actually many points, so I recommend you read them yourself too, I'll add main points here):

In the end, what I'd conclude is that different bacteria adopt different mechanisms to tackle this problem, and many of those mechanisms aren't known yet. So, there's no definite or exact answer to this question.

9
Why are pili more common in Gram negative bacteria than in Gram positive?
7
Why do different bacteria have different shapes?
2
List of all reported bacteria
2
Why bacteria produce light?
25
Hot water and bacteria
10
What bacteria shed harvestable energy from root zone organic matter?
1
Why don't bacteria eat food leftovers?