Why don't we hear ultrasonic sounds as aliased versions of the original signals?

The upper limit of hearing is approximately 15 kHz, dependent on age and other factors. According to the principles of digital signal-processing, such an upper limit would mean that the auditory system samples at least at 30 kHz or more.

Now suppose an ultrasonic signal, say a 40-kHz acoustic frequency - why would I hear nothing, instead of that signal aliased at a 30 kHz sampling rate?

Short answer
The cochlea is a tonotopic map with certain physically determined boundaries that determine the range of frequencies perceived. Ultrasonic soundwaves simply do not have a correlate on this map.

Background
The cochlea is a frequency analyzer that basically translates acoustic frequencies into a place-map. High frequencies are encoded basally (up to 20 kHz), low-frequencies apically (down to 20 Hz or so). Hence, it is pretty much a Fourier analyzing system (Fig. 1). This way of analyzing sounds is referred to as the place-coding theory of pitch. The place where a frequency is encoded is mainly dependent on physical characteristics of the basilar membrane in the cochlea. Every part is sensitive to a slightly different frequency then the next. This is caused by gradual variations in the stiffness and width of the basilar membrane, among other less important factors like hair cell length and so forth. The specific physical characteristics determine what specific resonant frequency a particular part of the basilar membrane has. Hence, incoming sounds are torn apart with standing waves, where each frequency results in a standing wave at a particular spot in the cochlea. 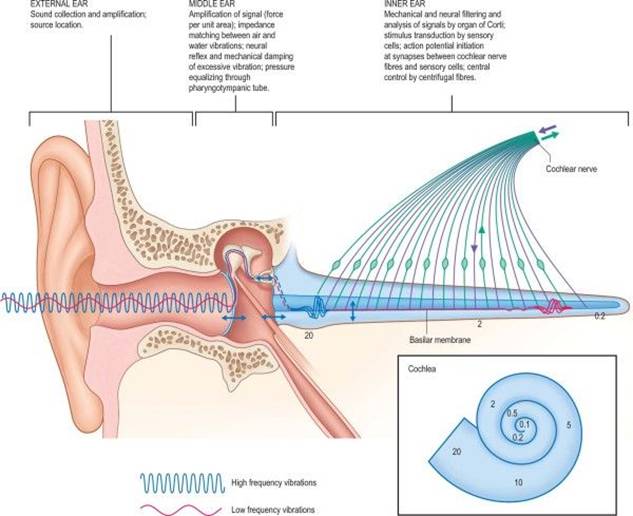 The sampling rate of hair cells is pretty much infinite, as they work on a continuous membrane voltage, i.e., they are analogue.

The secondary neurons, the spiral ganglion cells, translate these voltage differences into neural spikes and lead them through the auditory nerve to the brain.

Neural spiking follows the acoustic frequencies up to, say 1 kHz (frequency following response). This phenomenon is referred to as the temporal code of pitch hearing. After that, the refractory characteristics cause single fibers to fire only to one in a few wavelength periods. So at the upper limit of hearing, say 20 kHz, a ganglion cell may only fire once every 20 wavelengths or so. No problem, as many others do the same thing. Stochastics cause the wavelength to be nicely encoded in a population of responsive fibers. Furthermore, the auditory cortex contains a tonotopic map, meaning that high frequencies are processed elsewhere then lower frequencies. In other words, the auditory nerve doesn't need to faithfully encode the incoming wave.

A nice example in this are cochlear implants; they stimulate the auditory nerve with electrical currents. The place of the electrodes determines the pitch, not their pulse rate (although it can have an effect).

Now why are you not hearing ultrasounds? Simply because the basilar membrane does not contain regions sensitive to frequencies above 20 kHz or so. This is referred to as the Greenwood map, which depends on species.

I think that you are misquoting Aliasing.

Digital acoustics is explained in a mathematical sense, Aliasing is a maths concept. Real life acoustics is explained in a physical sense, which talks about reflection, absorption, phase change, harmonic modes, weights... the perception of sound is discussed as psychoacoustics and cortical structures and individual nerve impulse detection thresholds. consider for example the explanation of drum acoustics, it is not digital and on no physical objects will you see the word "Aliasing" used: https://en.wikipedia.org/wiki/Vibrations_of_a_circular_membrane

Aliasing refers to a digital concept, whereby we devide screens into pixels, and you can't make out objects narrower than a pixel. A wave is at least 2 "/////" points of data, so it requires a 2x window so we have 44k CD's to code 22Khz sounds.

I'll just tackle this precise question, aside from the mis-use of the term Aliasing: why would I hear nothing instead of the signal aliased at a 30 kHz sampling rate?

Pressure waves are continuous and physical sounds... A continous sound or physical object can't be subject to the digital distortion effect "Aliasing" which for example refers to the generation of infinitely high frequencies in between two sampled points of a clock rate...

The sound detection depends on the physical excitation of hairs and nerves that must exceed a threshold of detection. physical objects don't have radical and odd excitation modes when they absorb a frequency that is too high, they can resonate in different modes, but they wack about wildly and produce volume clipping and sound artefacts. Most of the time they don't have a limit of frequency after which they go crazy. the closest you can get to strange frequency modes in physical objects is resonance where the movement builds up into a high kinetic movement like the Tacoma Narrows Bridge. You have to approach the ear as a physical model and not a digital one. I think of the resonant modes of structures in the ear similar to a guitar string or a gong moving in 3D space. This gives you an idea of the nerve signals in the ear: https://www.youtube.com/watch?v=1JE8WduJKV4&t=17s

Almost all sound that is detected inside an ear is distorted by reflection from it's initial shape and source, and thereby it is smudged into reverb similar to light travelling through frosted windows.

Human brains and tissues are not digital and quantized, they aren't even analog, the are cellular with different types/sizes of receptor cells and nerves, variable and organic. You can say they alias only when you talk about perfectly equal sized cell matrix in 2d/3d pattern, like photoreceptors, except that our minds disregard information on cellular scales that aren't useful to us, like a biological version of aliasing would be.

If you study the function of the cochlea you will find that the structures, hairs, membranes are so different from a digital aliasing concept.

Human ears collect high frequency sounds unlike the dished ears of bats and cats and dogs, which are made of stiff cartilage that reflects higher frequencies well, into the ear canal. high frequencies are absorbed very fast by the skin and it takes specialized organs to reflect them to stiff cartilage chambers lined with hairs, each part of which is adapted to further reflect and absorb different frequencies.

The cochlea is organic and cellular, and it is similar to multiple electret microphone diaphragms and cilia all existing inside a complex organ which sends the vibrations to nerves. Sounds have to be collected by dishing and focused onto light and rigid membranes.

There is very much artifacting from all frequencies as they reach the ear. The sounds reflect of different surfaces, although high frequency ones absorb more easily and therefore are heard more linear from the source to the sensor, and have more time precision and more binaural precision.

Sounds don't tend to be generated in the exact same spot(point sources), so if you have for example an insect generating high frequencies, it will make a complex wave shape, that excites a large envelope of air around it, like dropping 5-10 stones into some water, and the outgoing wave will not be a simple form, but a complex series of phase interactions similar water that is excited by a swimmer. In that sense it has some properties of a moiré pattern, but it isn't aliasing, it's complex wave and phase interaction.

An Aliased oscillator on the other hand is a digital sound which contains infinitely high frequencies, because digital encoding forces sudden changes in amplitude to be abrupt, which is different to nature, where sounds are continuous and not discrete sets of values.

As sound travels through air and through flesh, the high frequencies which are all pure sine wave components of the overall sound, will simply be attenuated according to complex spectra of attenuation which correspond to the ambient air conditions, the angle of incidence towards the reflective and transmitting ear vestibules.

I actually think I realized the answer this morning. The biological equivalent of 'sampling' should occur at the neural level, e.g. after successful transduction. Since properties of the basilar membrane (e.g. stiffness/thickness) AND the transfer function of the ossicles would need to allow passing of a high frequency sound into the cochlea prior to sampling, the excessively high signal may never make it there in the first place.

Not the answer you're looking for? Browse other questions tagged neuroscience neurophysiology hearing signal-processing ultrasound or ask your own question.

40
Can humans perceive sounds above 20 kHz?

40
Can humans perceive sounds above 20 kHz?
6
Why does the refractory period of neurons only allow signals to pass in one direction?
3
How can humans hear low frequency sounds using the cochlea which is tiny compared to wavelength?
4
Why are "itch signals" transmitted so slowly from the skin to the human brain?
0
Why don't we hear all the processes in our body and what prevents us from doing so?