So we were studying this amino acid called cysteine. Specifically we were studying it's effect on melanin genesis. Our teacher told us how excess of cysteine affects the melanin synthesis by generating more pheomelanin. Low amount of cysteine promotes formation of eumelanin. He told us that if the concentration of cysteine is increased in cells then the above reaction starts producing pheomelanin in brown/black skinned people. I searched it on net and it seems to be true. The question is that if someone who has fair skin (produces more pheomelanin) is forced to live in low cysteine condition, then what happens? Eumelanin production should increase. His complexion must change. But it doesn't occur anywhere. Fair skinned people affected by malnutrition remain fairskinned. How is this possible? The pheomelanin production must stop since they aren't getting enough cysteine. Then how...?

He also told us that onions contain large amount of cysteine yet it can't be used since it is destroyed by stomach acids.

First: Your teacher is right with the statement that a low cysteine concentration affects the synthesis of pheomelanin. To understand this, you need to take a look at the biosynthesis pathway of melanin (from here):

The first steps for both melanin forms are the oxidation of the amino acid Tyrosine to DOPA (L-3,4-Dihydroxyphenylalanine) and the to DOPA quinone by the enzyme Tyrosinase (abbreviated Tyr). In the following step the branches divert, if there is enough cysteine present in the cells, then Cysteinyl-DOPA and subsequently Pheomelanin are synthesized.

If the cysteine concentration in the cell falls below the threshold of 0,13µM (this is taken from this paper), then the switch to eumelanin production occurs.

In the case of you second question, there is a different setting. The overall rate of the melanin production (no matter which flavor) depends on the amount of active Tyrosinase (for the production of the first steps in the synthesis cascade). The production of this enzyme is regulated by receptors in the cellular membrane (and different other factors).

In fair skinned people (classically red-haired and with freckles) these receptors are not fully functional, resulting much less Tyrosinase enzyme in the cells. This results in fewer available precursors for the melanin production and in turn in less need for cysteine. The reason is that the cysteine pool of the cell is not getting exhausted. 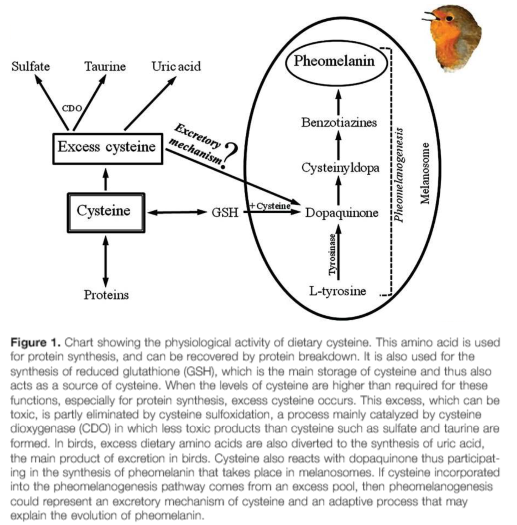 "Pheomelanogenesis may have evolved as an excretory mechanism to remove excess cysteine, and in humans this might potentially confer a greater ability to avoid disease such as Parkinson's and Alzheimer's disease, in which excess cysteine is a contributory cause." Source:https://onlinelibrary.wiley.com/doi/full/10.1002/bies.201200017

In this instance your teacher has his information incorrect. L-Cysteine has nothing to do with the production of Eumelanin. "Melanocortin 1 receptor (MC1R) is a key signaling molecule on melanocytes that responds to α-MSH by inducing expression of enzymes responsible for eumelanin synthesis. Some forms of Pheomelanin production lack the MC1R receptor to form eumelanin entirely; others have a weak signal if they have mixed Pheo/Eumelanin. Eumelanin has a strong MC1R receptor connected to the (Melanin Stimulating Hormone) α-MSH. https://www.ncbi.nlm.nih.gov/pmc/articles/PMC4299862/

Pheomelanin and Eumelanin have completely different pathways of formation. "Pheomelanin, consists mainly of sulfur-containing benzothiazine and benzothiazole derivatives (Figure 1a). L-cysteine is the chief source of sulfur and is, therefore, essential for the pheomelanin synthesis (12). Eumelanin, on the other hand is an extremely heterogeneous polymer comprising of 5,6-dihydroxyindole (DHI) and or 5,6-dihydroxyindole-2-carboxylic acid (DHICA) units (Figure 1b)."https://www.ncbi.nlm.nih.gov/pmc/articles/PMC4299862/ 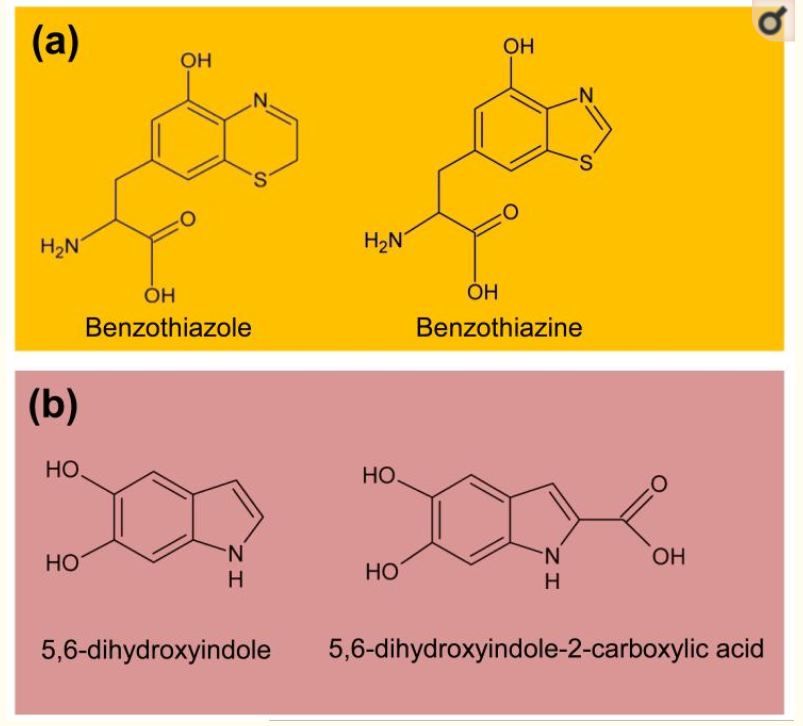 This is the UPDATED information on L-Cysteine production for Pheomelanogenesis, which says nothing about L-Cystenine levels falling and creating Eumelanin as this "guess" (not even a theory) makes no sense published May-Jun 2008

Melanins can be classified into two major groups-insoluble brown to black pigments termed eumelanin and alkali-soluble yellow to reddish-brown pigments termed pheomelanin. Both types of pigment derive from the common precursor dopaquinone (ortho-quinone of 3,4-dihydroxyphenylalanine) which is formed via the oxidation of l-tyrosine by the melanogenic enzyme tyrosinase. Dopaquinone is a highly reactive ortho-quinone that plays pivotal roles in the chemical control of melanogenesis. In the absence of sulfhydryl compounds, dopaquinone undergoes intramolecular cyclization to form cyclodopa, which is then rapidly oxidized by a redox reaction with dopaquinone to give dopachrome (and dopa). Dopachrome then gradually and spontaneously rearranges to form 5,6-dihydroxyindole and to a lesser extent 5,6-dihydroxyindole-2-carboxylic acid, the ratio of which is determined by a distinct melanogenic enzyme termed dopachrome tautomerase (tyrosinase-related protein-2). Oxidation and subsequent polymerization of these dihydroxyindoles leads to the production of eumelanin. However, when cysteine is present, this process gives rise preferentially to the production of cysteinyldopa isomers. Cysteinyldopas are subsequently oxidized through redox reaction with dopaquinone to form cysteinyldopaquinones that eventually lead to the production of pheomelanin. Pulse radiolysis studies of early stages of melanogenesis (involving dopaquinone and cysteine) indicate that mixed melanogenesis proceeds in three distinct stages-the initial production of cysteinyldopas, followed by their oxidation to produce pheomelanin, followed finally by the production of eumelanin. Based on these data, a casing model of mixed melanogenesis is proposed in which a preformed pheomelanic core is covered by a eumelanic surface. Source: https://www.ncbi.nlm.nih.gov/pubmed/18435614

As stated above Eumelanin and Pheomelanin are two chemically different compounds. So even if Pheomelanin levels dropped one would not attain Eumelanin through the depletion of sulfhydryl compounds, because they follow completely different pathways of synthesis. This is determined by Genetics, one would have to turn on the SLC24A5 and SLC45A2 genes as a start.

α-MSH/MC1R plays a major role in the production of Eumelanin. MC1R Variants "Melanocortin 1 receptor is a highly polymorphic protein, and in humans many of the loss-of-function variants are associated with the “red hair color” (RHC) phenotype. Individuals with a dysfunctional MC1R may have decreased eumelanin synthesis leading to fair skin and an increased sensitivity to UV exposure."

MC1R and Pigmentation "There are two major types of pigment present in the skin, the darkly pigmented eumelanin and the red/yellow sulfated pheomelanin. Eumelanin is chemically inert and is highly photoprotective by absorbing UV radiation and oxidants. In contrast, pheomelanin is much less efficient at blocking penetration of UV radiation into the skin and can promote UV-induced cellular damage by contributing to free radical and oxidative injury. MC1R signaling is a major determinant for the amount and type of melanin pigments synthesized by melanocytes, regulating both basal pigmentation and the UV induced tanning response. **MC1R signaling increases **eumelanin synthesis****, the ratio of eumelanin-to-pheomelanin, and enhances melanosome transfer to enhance melanin deposition in keratinocytes.

Both eumelanin and pheomelanin derive from the sequential cyclization and oxidation of the amino acid tyrosine (Figure ​Figure33) (Ito, 2003). The first two biosynthetic steps are shared between the two pathways: the conversion of tyrosine to DOPA and then to DOPAquinone by the enzyme tyrosinase. Eumelanogenesis and pheomelanogenesis diverge after formation of DOPAquinone. Other enzymes beside tyrosinase are needed for melanin synthesis including dopachrome tautomerase and tyrosinase-related protein 1. Defects in many pigment enzymes yield hypomelanotic phenotypes such as albinism. Pheomelanin production is dependent upon the incorporation of a cysteine and retention of sulfur after the synthesis of DOPAquinone, which may explain why mature pheomelanin pigments are reddish/yellow rather than dark brown/black as eumelanin is. Although the control of the pigment switch between eumelanin and pheomelanin is regulated by multiple factors including the pH of the cellular milieu and the levels of tyrosinase (Burchill and Thody, 1986; Ancans et al., 2001), the presence of a functional MC1R is required for effective synthesis of eumelanin. Since eumelanin absorbs UV radiation, the more eumelanin the skin has, the more protected it is from UV damage." Source: https://www.ncbi.nlm.nih.gov/pmc/articles/PMC4885833/ 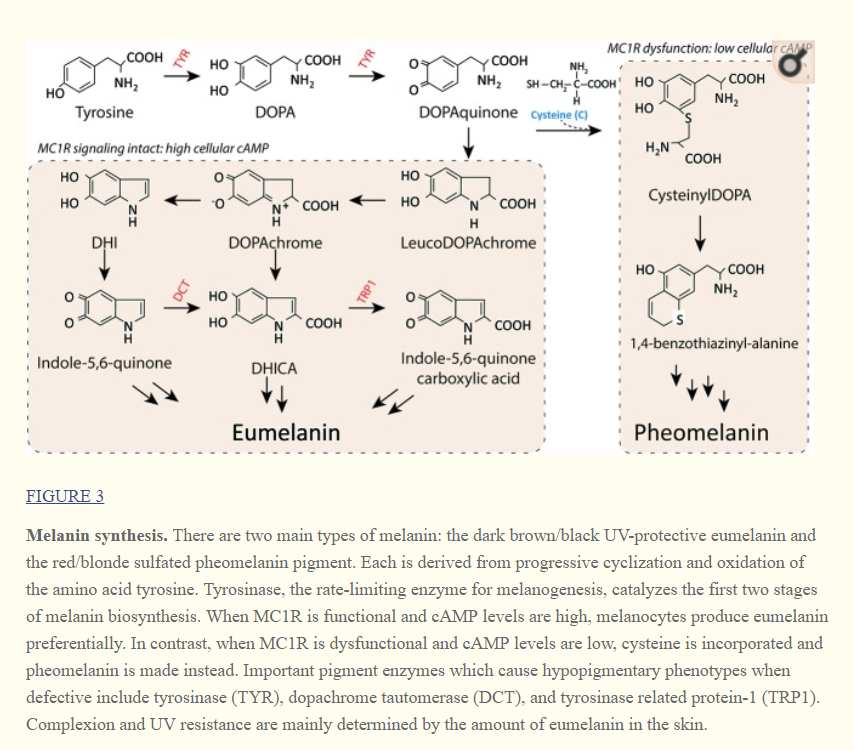 11
How do antioxidants affect human metabolism?
3
How does promoter sequence affect initiation?
5
In biosynthesis of cysteine and methionine, where does the sulfur come from?
6
How does CO₂ concentration affect photosynthesis?
8
Can one eye affect the other eye's low-light adaption?
2
How does an excessive amount of beta carotene affect skin colour?
0
How does consumption of vinegar affect food chemistry?
4
How does hydration affect digestion?
2
How does salt concentration affect chromatin compaction?
0
Is the heart more relaxed when stretched or contracted, and how does it affect cross-bridge interactions?