Can species be paraphyletic?

Edit. Also, I'm new to this forum. The people responding here, I'm assuming are actually biologists with a specific knowledge of cladistics, right? I'm a post-grad (philosophy of biology rather than biology per se) so I'm not really looking for links which explain what cladistics is, and certainly not wikipedia. I can access most journals if there is a paper on this subject. I can't find anyone in our dept who can give me a steer on this. I realise thhis is a slightly unorthodox research method, but I'm at a bit of a dead end here!

You say that "only monophyletic groups are valid as species"... That is according to a certain interpretation of evolution that is not necessarily mainstream, (you wouldn't be taught that definition of species in Oxford or Yale) and which idealizes cladistics into simple trees, which don't reflect reality of hybridizing species like orchids and hominids, where simple tree like branching has been proven to not exist. Inflexible definitions of phylogeny should be taken with a pinch of salt, because pollen and other reproductive systems cause many species to be flexible. It's unwise to state that definition of species without being well aware of the mainstream one: Ernst Mayr definition.

Strict interpretations of species lead to problems, because Darwin wrote: No one definition of species has satisfied all naturalists; yet every naturalist knows vaguely what he means when he speaks of a species. Generally the term includes the unknown element of a distinct act of creation.

If you check the Wiki page on species, they state 11 contrasted definitions of species which are not necessarily cross compatible. https://en.wikipedia.org/wiki/Species#Standard_definition:_Mayr.27s_Biological_Species_Concept

The definition of species that i was taught had nothing to do with the parental mechanisms that shaped the species differentiation from other species, and that it is a practical concensus to effectively group animals methodically, which doesnt actually reflect natures unmethodical reality.

Seeing as humans interbred with neanderthal and denisovan species, and orchids interbreed very commonly, the following image refers to an idealized phylogenetic model which is not applicable to all reproductive systems, and it isn't applicable to humans. 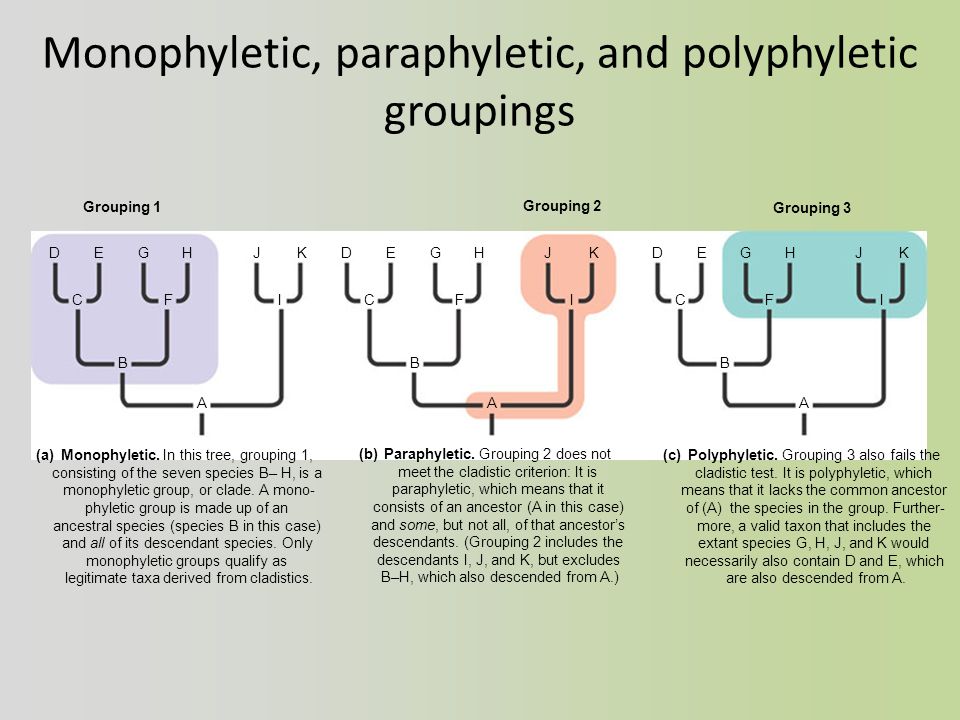 You have to understand that a fossil "species" is very different than the common usage. A species is not really a real thing. Paleontology (and other fields) accepts the vague nature of the classification of species. All life that has ever existed on earth is really one huge messy ring species on the long scale once time is included. phylogeny is a way of imposing a classification system that helps us understand life, any such classification will have arbitrary cut off points becasue WE use them to help understand relationships on the large scale. Species is one such arbitrary distinction, it is convenient and works on the large scale with living organisms just fine, but breaks down on the finer scale or once deep time is included.

For fossils you group by noticeable/measurable differences, while trying to make allowances for differences that should occur within a population (like sexual dimorphism). Paleontologists accept that a "species" is just an approximation, which is why the finer the scale of the cladistic analysis, you rely on individual specimens and not grouping them into a species. Ideally all cladistics would be done this way but it is completely impractical, in extant life becasue of huge population numbers in fossils becasue of incomplete specimens causing missing variables. On an analysis using any group as taxa, including species, it's fine if they are paraphyletic becasue they are only approximations.

The boring but probably most correct answer is: it depends on the species concept that you accept.

Basic evolutionary theory predicts that paraphyletic species (as defined by a variety of concepts) should be generated under a wide range of processes.

The vast majority of species is described from gross morphological states ("morphospecies"). They can be wholly paraphyletic, as can species under nearly all concepts, except those that insist on monophyly (e.g. phylogenetic species concept of Cracraft 1989, deQueiroz and Donoghue 1990).

A problem to consider is one of the source of data. For example, a species can be monophyletic at a particular gene, but not at great many others. Broadly speaking, this is known as the "gene tree vs. species tree" problem. A particular set of relationships can be recovered from analyses of a single genetic region, drawn from a wide statistical distribution of (for example) genealogies. Ideally we would have the genetic sequence within region(s) that cause(s) populations and species to be differentiated.

Depending on population size, after some amount of time (potentially very large), all genes are expected to be monophyletic in each descendant species, a condition that is then called "reciprocal monophyly."

Separately, you can take a look at https://en.wikipedia.org/wiki/Paraspecies for a straightforward treatment. As for your specific example, here is a great treatment of the subject: http://evolution.berkeley.edu/evolibrary/news/100501_xwoman

Can species be paraphyletic?

So if species are frequently paraphyletic, how can cladistics be tenable?

The grouping of lineages into species is necessarily somehow arbitrary. However, the relationship between lineage is free from any subjectivity. The reconciliation you need to go through is to accept that the concept of species, despite being so much used, is of no use to phylogenetic (or only to facilitate naming).

85
How could humans have interbred with Neanderthals if we're a different species?

11
Species with reproduction barriers that can both reproduce with a third species
3
19th century Latin species description
2
What is difference between breed, variant, subspecies and species?
1
Can all animals of the same species crossbreed?
0
Can a species populated solely by males be saved from extinction?
3
Strain vs. Species
1
Distance between species
2
Are there comprehensive species descriptions on most species?
0
Can two different species in the same genus generally succeed in the same habitat?