Difference between Appendix and the Cecum?

What's the difference between an appendix and a cecum, and what are their functions?

In herbivores the Cecum is an area that stores plant matter and helps digest it via symbiotic bacteria. Carnivores have smaller Cecums because meat is easier to digest than plant matter. In humans the Cecum is also an anatomical landmark that delineates the change from small intestine (a digesting organ) to the large intestine (mostly a capacity/storage organ).

The Appendix is a small, previously thought "superfluous" fleshy worm-shaped organ at the junction between the small and large intestines. Recent research posits that the appendix is sort of a harbor for a person's gut flora that can re-populate the intestines should the existing bacteria die or get removed (diarrhea being the most common cause). It can also become infected, inflamed, and require surgery to remove (Appendicitis). 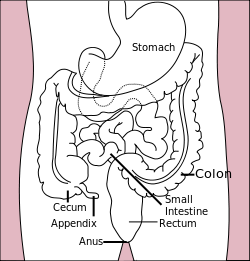 Appendix and cecum both are parts of the large intestine.

Appendix is the inferior extension of the cecum of the large intestine. It is a blind pouch-like structure that resembles a worm, hence the name ‘vermiform’.

Cecum is a small intraperitoneal pouch-like structure located on the right side of the lower abdomen.

Not the answer you're looking for? Browse other questions tagged human-anatomy or ask your own question.

15
Is the appendix a vestigial structure in all vertebrates?