I am searching for an example in the nature, where a layer of something (skin, coat, film etc) can allow fluid to flow trough (not absorb) from one direction and prevent/repel from other direction. I am not talking about vein valves, prefer more like a nano-structure of valves as a layer on/around something.

Update: I found something similar what i am searching for, but its not clear:

Directly connects the cytoplasm of two cells, allowing various ions and molecules to pass freely between the cells.

And there is a reason why this channel is hydrophilic, someone can explain this?

About me I have no deep knowledge about biology, please be patient and help me to understand things on basic level. Thank You!

I don't know any-such continuous-membrane-material that can do so. But yes certain membrane-transport-proteins can do so.

Carrier proteins are normally highly specific about in which-direction to transport which molecule; and in general, they are classified as uniporters, symporters and antiporters. *

So an uniporter would be an accurate example of situation you are asking about.

Carrier proteins those utilize ATP for pumping (those shows "primary active transport"), are also normally highly specific to direction. For example the Na+-K+pump and the H+ pump. 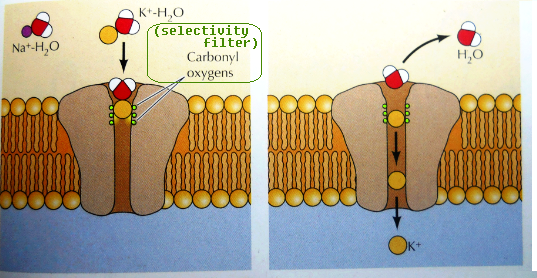 A potassium channel diagram showing the selectivity filter (diagram from The cell/ Cooper **, slightly edited: Na+ filter-out not shown, and the term 'selectivity filter' is labelled in image ). 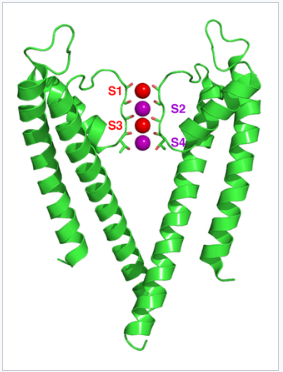 KcsA potassium channel diagram from wikipedia. In its open-conformation out of the following;

i.e. the third one, can conduct the K+ ion in a specific direction, because the pore-region is very specific- it allows K+ ion only to enter in the cell.

Not the answer you're looking for? Browse other questions tagged zoology biophysics cell-membrane plant-anatomy membrane-transport or ask your own question.

4
Why do Lapidaria margaretae look like stones?
2
Thin layers or laminae that make up a single summer band in tree ring, what are they?
7
Why lipophilic molecules can pass phospholipid bilayer, in spite of 2 hydrophilic layers?
2
Example of invertebrates that are attracted to heat?
7
Is the xylem like a tissue paper?
8
Is there any example of living beings destroying their environment?