Can the human chin have developed to protect against combat strangles?

Has the mechanical explanation of headlock defense ever been discussed by scientists to explain the chin(protuberantia mentalis)? A mechanical advantage that prevents death and being beaten up by another male would undergo a type of topological optimization that could be measured. 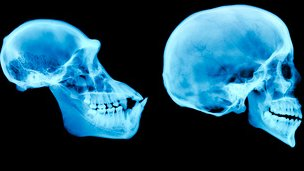 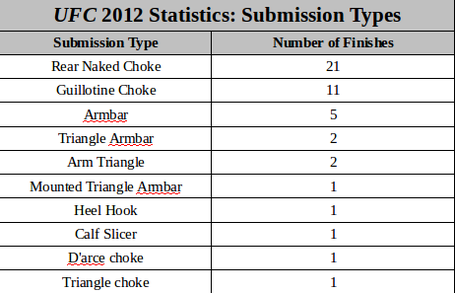 Positions where an assailant wraps his arm around a defendant's neck constitute 3/4rs of professional wrestling submissions. It's even more prevailant in amator wrestling where the contestants don't learn conplex arm and leg locks, in children, and in young adults.

When the neck is lowered, arm is barred from the neck, and the commentator shouts"will he manage to keep his chin down"

That kind of defense of the neck with the chin lowered can last 2-3 minutes, after which time the assailant's arms tire and the position changes.

The chin can therefore play a major role in human defense, mate selection, dominance tussles, and it's morphology may be designed to be vertically long and lower into the solar plexus.

There is a pit at the top of the sternum into which the chin fits when it is lowered.

Any kind of space under the chin can serve as leverage to push the head upwards and access the neck, so a chin that specificially points downwards flush with the solar chest and which deflects the arm upwards towards the mouth is an advantage to humans.

The chin size is promoted by testosterone which happens to be a hormote that encourages fighting.

The human chin is more powerful than in all other primates and can withstant more PSI force, which suggests that it is made to withstand a lot of clunking damage.

Actually 70 percent of paleolithic mandibular fractures could derive from fighting, that's in line with today's epedimeology figures, minus car accidents.

I believe that the chin comes from a range of selective factors, and i am curious about it's topological optimization, they precise shape and it's mechanical advantage. I believe that the current theories are true, and I wouldn't be surprised if the defense of westling positions can account for a lot of it's precise shape similar to a snow plough and it's alignment with the chest.

If any anthropologists are vaguely entertained by this theory the effectiveness of the chin in wrestling defense can be measured by studying archive of the number of successful defenses against wrestling strangleholds, which outnumber the attempts by 2-5. 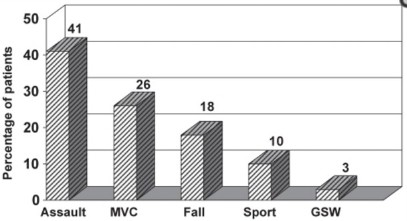 Strangulation is unique to our species, so it is fitting to question: which hominids first used them? Was the bite force of a Neanderthal the previous best defense for choke holds? Is the Neanderthal physiology or mind not conducive to that kind of wrestling interaction? When did hominids develop aggression traits and cognitive forethought and a wiry physique that made choke holds possible?

Did the advent of a snowplow chin as a strangulation defense even facilitate the reduction of the jaw size of humans to it's present scale?

Anthropologically, human faces are not level with the genitals, as in dogs and monkeys, who inspect each other's genitals to gather information about their sexual state. Humans communicate with the eyes diverted towards the mouth, and face, they express their sexual state with mouth movements, side motions, and an array of gestures. The Chin also serves a display purpose in that end, so mechanical forces are not the only things that should be considered, but they count alot!! The development of complex facial expressions to describe sexual communication may have also encouraged the formation of a robust chin.

The human jaw is as strong or stronger than that of other primates. The incisors can deliver 70 PSI to the chin, and a human punch can deliver 1700 PSI. 6Mpa is about 800 pounds.

The chin serves as a crash guard to intercept whacks at the apex of the triangle, It is used as a life saving neck guard in the most common wrestling submission by providing no leverage under the jaw, and it is a masculin trait controlled by testosterone, quite contrary to the general neotenic traits of homo sapiens.

No We know why the chin exists, the jaw has to be strong to be stable and not twist during under strain. humans have tiny jaws, large tongues, and sharply angled neck that leaves no room for a large enough interior ridge, so the jaw has to protrude forward or get taller to compensate. Our large facial muscles and tongue encourage the former, as does the overall shrinking of the face and jaw. The development of the chin lines up perfectly with the shrinking of the jaw and face and expansion of the tongue in hominid evolution.

Now the size of the chin may very well be influenced by sexual selection, your hypothesis might even fall into this if you had any evidence. sexual selection could exaggerate it once present, but we know why the chin originates.Like everything in evolution there are multiple factors at play but you have yet to show yur ideas is even a factor much less an important one.

For your idea to hold water you need to show several things.

Also there are lots of ways to kill someone while "wrestling", statistics from a sport competition with restrictive rules are not helping your case. I can't claw someone's eye out or stab them in the UFC. And I want you to think of why a human seeking to kill another would forgo the many weapons they would have, to wrestle them instead. especially why this would would happen so often a defense would need to evolve.

All you ever wanted to know about the chin

It's naive and wrong to state that the theories for the chin are agreed upon and and comprehended, else that protection from strangling is an impossibility in selective pressures which contribute to it's current shape:

Protective reinforcement of the hominin face is a 2014 study.

A search of google indicates that:

The previous answer is based on the impossibility that choking can be of any significance in human interaction. For the idea to have any merit, you would have to demonstrate that:

40-90% of street fights caught on camera ended up with wrestling on the floor. https://martialarts.stackexchange.com/questions/1342/is-it-true-that-most-fights-end-on-the-ground-what-is-the-evidence

Neck constrictions end 70-80% of human wrestling fights, and are common in the schools.

John suggests that eye gouging can be a major statistical result in wrestling, however eye pokes only account for 1.7 to 2.1% of all eye traumas, which is of low significance including sport which contributes most of that 1.7%, compared to jaw fractures, 42% of which are caused by assault. 13% of eye traumas are from violence, mostly from punching, but also from sticks bottles knives and weapons, and very few from fingers.

Men don't gouge their wives' eyes out in order to assert dominance in studies of domestic abuse.

The musculature of the neck changed when humans became more gracile and lithe. Their necks allow them to play the piano and contributes to their intelligence and the development of their brains.

Evolution of speech caused the hyoid bone to drop (which allows primates to breathe and drink at the same time, and prevents choking) and without the change of the larynx and the hyoid bone, we'd still garble and hoot much like our chimpanzee cousins, scientists say.

The growth and forwards slant of the chin ("mental eminence" from Menton, french) vary relative to testosterone, which is a fighting, sexual appetite, and strengthening hormone, though shape of the chin doesn't vary a lot. A large majority / all sapiens have a chin which does not allow leverage under the neck compared to ancestors. Neanderthals had much more of a chin than homo heidelbergensis.

Here is an example of a skull of a man who was exposed to high levels of testosterone (right), compare to a females skull (left): 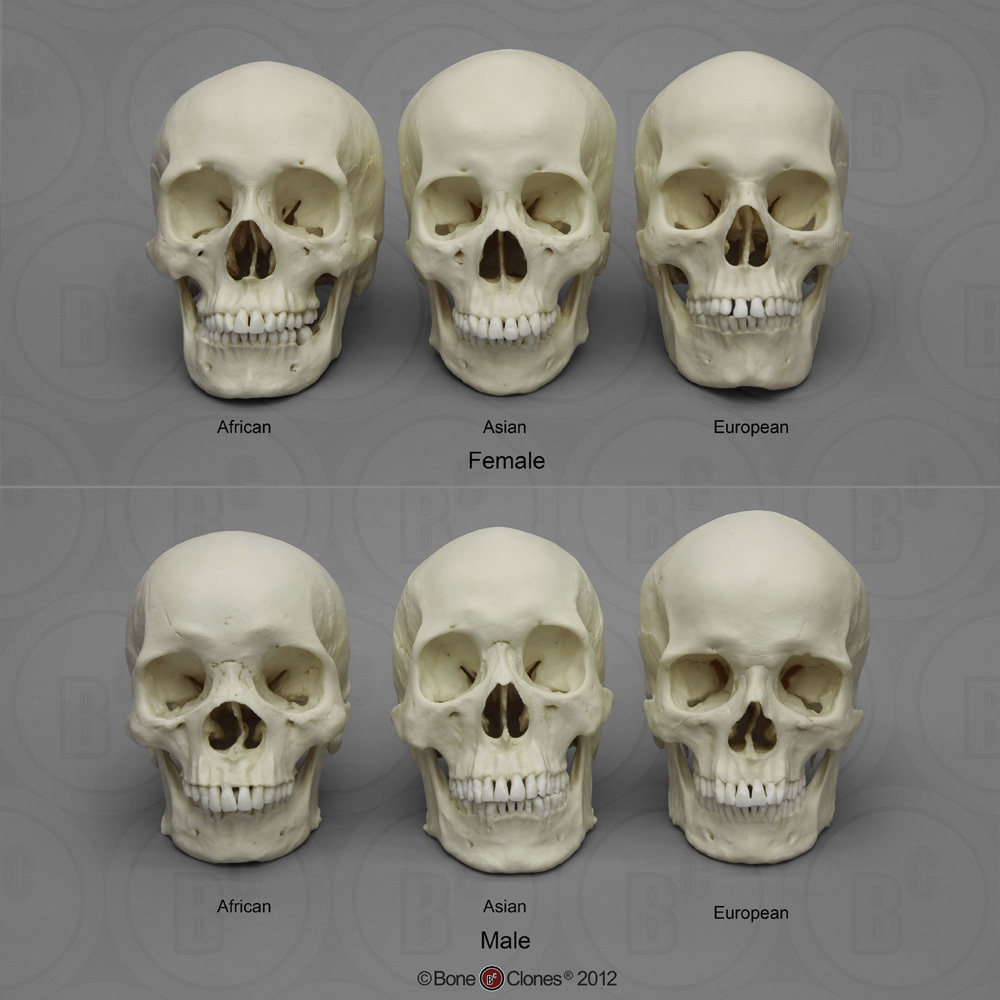 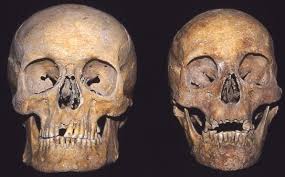 When the body was less gracile and more muscled, the arms were more articulated, Is when the chin was weaker in PSI resistance, and the superciliary arch and the skull was stronger.

Previous studies have shown that the chin could be due to a range of factors, and it might be wrong to say that defense is the only cause for selection.

It would be wrong to say that the selection pressure on the chin from fighting is known, and to say that we have measured the mechanics entirely, sexual selection is very closely associated with the chin, as women are interested in beard and chin size of males.