How can I determine where meiosis occurs in the life cycle of a plant?

To fill out this diagram with the mitosis, meiosis, and ploidy , we start with the definition that spores are haploid (N).

Based on knowing that as the sperm and eggs are N, the gametophyte is also N (as only fusion can make something go from N to 2N).

Then I know that the link between spores and gametophytes is mitosis, as we go from N to N.

Can I figure out at which stage meiosis occurs with this information, or do I need to know more about the definitions of the different parts of the life cycle? How do I know that sporophyte to spores, and not zygote to sporophyte, is Meiosis? 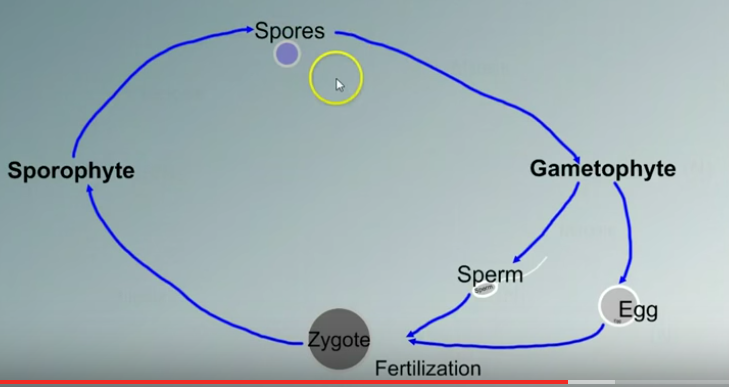 All of these terms are just names for things that existed long before someone named them, and although you can figure out some of the ploidy from the diagram, you need to know the terms/definitions to complete it all.

Sporophytes are just the name for the diploid cells of a plant/algae that reproduces through a haploid life stage called a spore. You could consider the zygote almost like it is a "special sporophyte" from the perspective of ploidy: it's only special because it's the first cell assembled from two haploid cells. All of the other sporophytes are produced from mitosis from either another sporophyte or from the original zygote.

Being diploid is nice because you have two copies of every gene, which is more robust to mutations (while also maintaining genetic diversity for later generations), and, crucially, it lets one organism make a variety of haploid spawn for sexual reproduction.

Maybe you are wondering just about the terms haploid/diploid, and why "2N" vs "N"? The important thing is it isn't just the total number of chromosomes, it's the number of COPIES of each chromosome: with N you have just 1 of each, with 2N you have two of each. The important thing is that they are homologous, it doesn't matter if N is 1 or 2 or 40.

Not the answer you're looking for? Browse other questions tagged cell-biology homework reproduction meiosis mitosis or ask your own question.

6
What is the main general difference between Mitosis and Meiosis?
6
What type of cell do you start with in Meiosis?
1
Do all species have asymmetric female meiosis?
7
If the haploid prothallium of a fern fertilizes itself into a diploid sporophyte, does this make all ferns clones?
1
How can a haploid plant be bisexual?
2
How are germ cells not reduced in number?
1
How do biologists determine the parents of a child
0
Can a viable embryo develop from the fusion of two egg cells?
1
Which is the correct term haploid daughter cells or haploid parent cells?