Can mRNA be used by ribosomes more than once?

Can mRNA be used by ribosomes more than once? I mean can mRNA be translated more than one time? If not what will happen to it after translation?

There are a few cases in translation that I can think of where an mRNA is translated more than once: the closed loop model of mRNA translation, translation reinitiation, and translation by polysomes.

Here's an interesting paper to get you started: ncbi

Essentially, the theory is that mRNA can form a closed loop with the 3' end held to the 5' end by various factors. The ribosome assembles near the start, runs through the mRNA, translating the polypeptide sequence, then dissociates at the STOP codon. Since the "end" of the mRNA is near the "start" of the mRNA, the ribosome can reassemble soon after dissociation.

The ribosome dissociates incompletely at the STOP codon, the small subunit keeps moving on the mRNA, then the large subunit reattaches at a downstream start site. This happens when the mRNA has multiple ORFs.

(See the wikipedia article on Polysomes for more details)

This basically means that you have a ribosome train moving along an mRNA. The same protein is being translated multiple times, but by different ribosomes. One really cool thing about this is that it's actually been observed by electron microscopy! 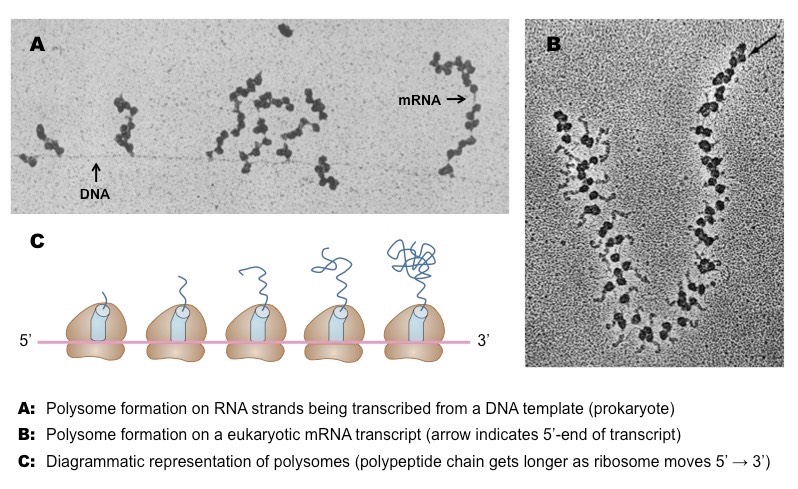 To answer the 2nd part of your question... wikipedia

mRNA gets degraded in a process called RNA interference (RNAi). Small interfering RNAs (siRNAs) are also transcribed that are incorporated into a ribonucleoprotein complex (RISC) that has an mRNA cleaving activity. The siRNAs are complementary to segments of mRNAs in order to give specificity to RISC.

Not the answer you're looking for? Browse other questions tagged molecular-biology translation or ask your own question.

2
Do alternative start codons code for methionine after transcription?
2
Why does the inhibition of translation initiation cause the accumulation of 80S ribosomal monosomes?
6
Can ribosomes read ssDNA?
3
Why did translation develop a specific codon for initiation?
3
The shape of mRNA
1
What prevents mRNAs that are localized to a specific part of the cell from being translated before they reach their destination?
1
How is Open Reading Frame (ORF) chosen?
1
How do mRNAs find ribosomes?
6
How can a good SD / Kozak sequence enhance translation efficiency?