What causes the variable/conserved structure in the 16S rRNA gene?

See the image below for a visual representation of the 16S rRNA gene. It is composed of conserved and variable regions however I can't see to find a reasoning for why this is the case

The structure of ribosomal RNAs involves double-helical stems, on the one hand, and loops or junctions, on the other. A comparison of small-subunit rRNAs of different sizes shows that, despite increasing complexity, a basic core structure exists. The is illustrated in the diagram below is adapted from Brimacombe, Trends in Biochemical Sciences (June 1984) 273–277.

From a structural (3D) point of view, both stems and loops are conserved, but as far as the nucleotide sequence is concerned, the helical stems are less conserved than the loops and junctions. This would appear to be because the main function of the helices is structural — so an A–U base pair can generally be replaced by a G–C (or U–A or C–G) base pair, whereas the loops are involved in interacting with various species — tRNA, initiation, elongation and termination factors, ribosomal proteins and the 50S subunit — which may involve more specific bases.

The main thrust of research on ribosomal structure (and what has interested me) is the relation of structure to function, but Carl Woese realized that, because of its ubiquity, rRNA was an excellent molecule for phylogenetic studies. Although, if one compares, say, mitochondrial ribosomes with mammalian ribosomes the sequence conservation is small, with different strains of bacteria it is much larger. This has led microbiologists interested in bacterial phylogeny to analyse the best regions for comparison in 16S rRNA, in terms of their degree of conservation, resulting in the concept of variable and conserved regions in the diagram in the question. (I find this terminology rather unfortunate because of its similarity to the totally unrelated immunoglobulins.) It appears that this is due to van de Peer et al. (1996), from whose paper I reproduce the figure below. 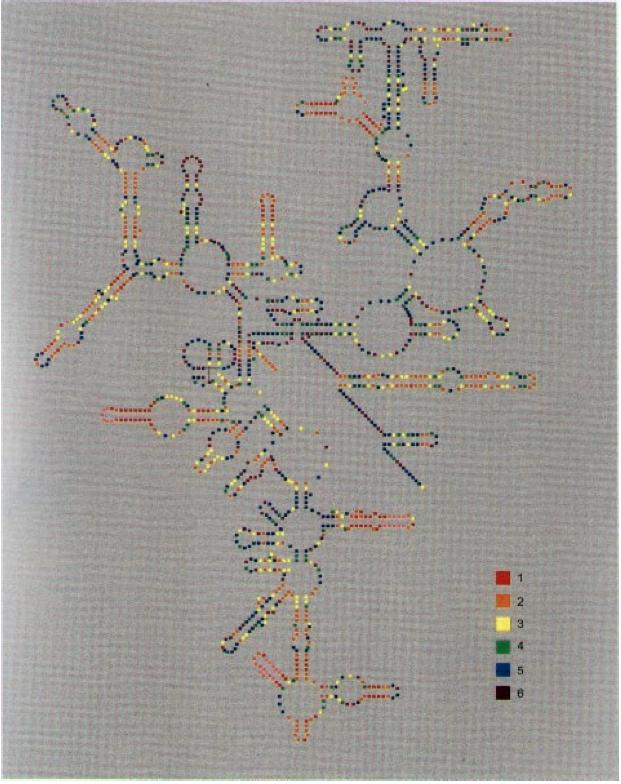 Not the answer you're looking for? Browse other questions tagged molecular-biology molecular-evolution ribosome or ask your own question.

8
Sequence of ribosomal RNA
3
What does the gene name “lexA” stand for?
8
What is it about the housekeeping genes that makes them almost immune to gene regulation?
4
Manual Primer Design for a gene on the reverse strand
1
Can qPCR primer with several mismatch works?
0
Why are some parts of an rRNA structure diagram not labelled?