Why is it said that bacteria have no membrane-bound organelles, when they often have one or more flagella?

Why is it said that bacteria have no membrane-bound organelles, when they often have one or more flagella?

https://www.ncbi.nlm.nih.gov/pmc/articles/PMC3386205/ "Cilia and flagella .. are membrane-bounded organelles with unique membrane,"

Also, there is a biological motor (I don't know whether it's considered part of a flagellum or considered to be outside the flagellum, driving it?), but the motor surely has parts, e.g. a flagellum motor -like some mechanical motors, has a part, a "stator". And surely these parts have membranes.

Note- Alcamo's Fundamentals of Microbiology: Body Systems p124 this link from google books mentions other cases of membrane-bound organelles in bacteria including a discover as early as 1994. here

I suppose an answer might be that when people say that a bacterium contains no membrane-bound organelles, they mean except for any flagellum that it has. They're referring to the main body of the bacterium, like one might refer to the torso of a human.

Prokaryotic flagellum is very different from eukaryotic flagellum: it's not surrounded by a biomembrane (as in eukaryotes) and its composition is distinct. Actually, they only have in common the name and the function:

It's clear that prokaryotic flagellum is just a protein-made structure that crosses the membrane and grows outside it, as represented in this image (notice the TEM at the bottom right): 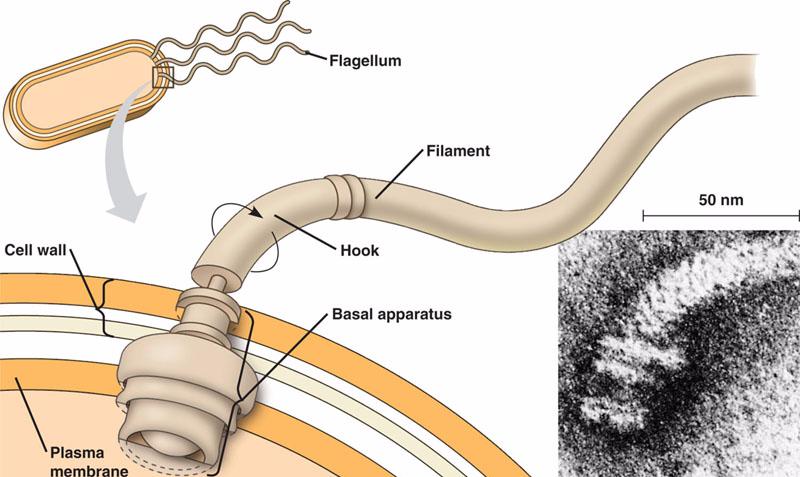 First, this is of some relevance..

https://www.karger.com/Book/Home/258738 says "The traditional view of biology divides living organisms into two major groups, the eukaryotes and the prokaryotes, the former having membrane-bound organelles, the latter lacking them. However, recent research has revealed that this view is blatantly in error. " (so that is a link confirming one of the things the question said).

Now, to elaborate in answer to the question itself -

I have spoken to a biophysicist familiar with microbiology, that seems pretty knowledgeable.. and he gave an answer that went straight to the point.

He said that the bacterial flagellum has no membrane, and none of its intricate internal components have any membranes.

As to what holds them together(given that it's not a membrane) - all the flagella stuff is protein, held together with protein-protein interactions, the same stuff that holds all protein complexes together, such as salt bridges, hydrophobic effect, etc.

Also the question mentions this

https://www.ncbi.nlm.nih.gov/pmc/articles/PMC3386205/ "Cilia and flagella .. are membrane-bounded organelles with unique membrane,"

It appears the above statement is wrong or misleading, see

"The term flagella is ambiguous. It refers to bacterial structures composed of flagellin protein and to eukaryotic structures composed of microtubule proteins and ATPase (tubulin and dynein). The fact that cilia are nearly identical to eukaryotic flagella and have nothing in common with prokaryotic flagella is not apparent from the terminology. It is proposed that the 30-year old suggestion of Smagina and reiterated by Kuznicki and others, be adopted: that cilia and eukaryotic flagella be called "undulipodia." The term flagella ought to be restricted to prokaryotic organelles, bacterial flagella and spirochaete axial filaments: solid structures composed of flagellin which protrude through the plasma membrane and lack intrinsic motility throughout their length. Undulipodia are defined as intrinsically motile intracellular structures showing a 9-fold symmetry in the pattern of arrangement of 24 nm diameter microtubules. They are limited to eukaryotes, members of the protoctist, animal and plant kingdoms."

Also, while it's not entirely clear to me if there was at any time a shift from observable characteristics, to genetic characteristics, in determining the difference between eukaryotes and prokaryotes, this page mentions something about the origin of the terms prokaryote and eukaryote. And I understand from the knowledgable biologist I spoke to that nowadays the distinction is genetic or mainly genetic. http://www.madsci.org/posts/archives/2000-04/956011333.Gb.r.html

I have spoken to another microbiologist. He thought that the term prokaryotes is not useful, it doesn't have an evolutionary basis.. And at least the term eukaryotes, cells with a nucleus, the cells may be quite related.. Whereas prokaryotes - cells without a nucleus - is defining something partly by what it's not, and it doesn't group organisms phylogenetically/evolutionarily. Prokaryote refers to bacteria and archaea, both generally unicellular. But archaea are evolutionarily and biochemically more similar to us(eukaryotes) than they are to bacteria. There's no valid reason to lump them with bacteria. Not evolutionarily or biologically. The most recent development is that eukaryotes likely evolved from archaea. Some newer models show the eukarya lineage as rooted in the archaean lineage. All of them show that they're more close than either is to bacteria though That's universally agreed Phylogenetically and also cytologically. The three domains of life are Bacteria, archaea, and eukarya. Eukaryotes still make sense as a grouping as they are a group of organisms more similar to themselves than to bacteria or archaea. And indeed they are identified genetically.

Not the answer you're looking for? Browse other questions tagged cell-biology bacteriology cell-membrane organelle or ask your own question.

8
How is the exogenous DNA protected from degradation during bacterial transformation?
4
Does conjugation support gene selection?
5
Why don't all bacteria have F-plasmids by now?
2
How do minute changes in an organism, as a result of evolution, get carried over to next generation
1
Do Archaea have membrane-bound organelles?