I have a general understanding of the Bohr effect, and that Hemoglobin's affinity for oxygen will shift depending on the conditions of the lungs and tissues. However, I'm struggling with the following question; I feel as though I'm getting caught on the less-than-ideal answer choices, but I want to make sure I'm not missing a basic principle that could reason this answer more clearly.

Q) Which of the following best describes how a shift to the right in the dissociation curve results in more oxygen delivered to tissue?

C) On the right-shifted curve, Hb will pick up more O2 in the lungs

D) On the right-shifted curve, Hb will pick up less O2 in the lungs 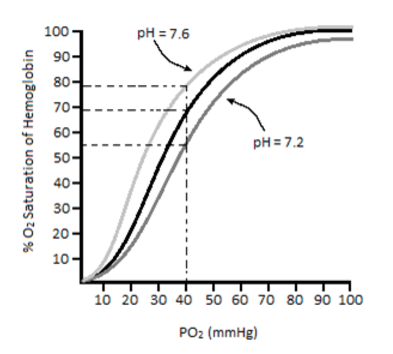 My reasoning for choosing A is less-than-ideal: let me explain. First, I've been taught that a good rule-of-thumb for oxygen affinity is that Leftward shifts are related to the lungs, while Rightward shifts are related to the tissues. Therefore, because the answer choices C & D refer to right-shifted curves and the lungs, they can be eliminated. However, I'm not convinced this "rule" is so absolute - I can imagine that the curve can shift left & right within the tissues and the lungs. For the sake of argument though, I'll assume the rule works and eliminate answer choices C & D. Then, I can also eliminate answer choice B because it's not a true statement. As a result, I arrive at answer choice A. However, I don't feel as though it quite answers the question. Can anyone please provide some insights as to my reasoning, and/or perhaps what I'm missing? Thank you!

Comment: this question is a bit confusing, since none of the answers seems to directly explain how a shift to the right in the dissociation curve results in more oxygen delivered to tissue. Therefore, we'll try to choose the least wrong option...

This answer came out a bit long, so here's a TL;DR for you. I chose

Although not stated explicitly, the pH in question is most probably the blood pH (this is a rather well-known graph from biochemistry undergrad studies). It shows that when blood pH drops or rises, the amount of %O2 saturation of hemoglobin deviates from the norm accordingly.

First of all, regarding your rule-of-thumb, it might be misleading in this context, since it may be true in both normal conditions and pathological conditions, depending on the site of measurement:

I believe the graph represents the latter situation, i.e. how hemoglobin behaves under the pathological states of acidosis (lower blood pH = right-shift) and alkalosis (higher blood pH = left-shift) compared to the normal state, since it depicts the change in %O2 saturation over the physiological range of pO2 and the curve is continuous (a depiction of blood pH only in the tissues or the lungs would not have resulted in a curve, since pO2 does not change significantly in each site, certainly not over the physiological range).

According to the section titled The influence of pH on oxygen-hemoglobin binding in this excellent reference, "the presence of a low pH locks it [hemoglobin] in an unreceptive state, preventing it from binding oxygen molecules". This means that Hemoglobin's affinity to oxygen will be reduced, so that more oxygen will be released (in other words, less will be bound) in the tissues and less oxygen will be bound in the lungs. The two "less" in the previous sentence are in accordance with the curve of pH=7.2 being below the other two curves over the entire range of pO2. I highly recommend reading the above reference through and observing the figures.

To sum up, none of the possible options is satisfying enough, but option A seems to be the least wrong or unrelated to the situation described, so I would choose it.

Not the answer you're looking for? Browse other questions tagged human-biology hematology red-blood-cell pulmonology or ask your own question.