Why does capsaicin irritate mammals and also kill fungi? Are the two related?

From this article I heard about a study (search "Tewksbury") which concluded that chilies make capsaicin to discourage mammals from eating their seeds, since grinding by mammals' molars render the seeds unable to germinate. Birds, on the other hand, don't break open the seeds and spread the plants far and wide.

But, they also reference a different theory: capsaicin evolved to defend against a certain kind of fungi that infected pepper plants.

My question is: why does the same chemical do these two things? It seems like quite a coincidence, unless capsaicin has some general destructive properties. But Wikipedia's explanation talks about how capsaicin artificially stimulates a certain receptor in our mouths -- which sounds totally unrelated to fungi.

Recent study has shown that capsaicin indeed has antimicrobial properties. For example, see this article:

In one of the attempts to study its mechanism, a study on yeasts suggested that it works in following ways:

Though in mammals, its mechanism of action is quite different; it acts on ion channels to give a burning sensation. See this article:

The burning and painful sensations associated with capsaicin result from its chemical interaction with sensory neurons. Capsaicin, as a member of the vanilloid family, binds to a receptor called the vanilloid receptor subtype 1 (TRPV1). TRPV1, which can also be stimulated with heat, protons and physical abrasion, permits cations to pass through the cell membrane when activated. The resulting depolarization of the neuron stimulates it to signal the brain. By binding to the TRPV1 receptor, the capsaicin molecule produces similar sensations to those of excessive heat or abrasive damage, explaining why the spiciness of capsaicin is described as a burning sensation.

Though its mechanisms are different, it performs quite similar functions: protecting the plant from predators and infections i.e. a defense system.

It seems like quite a coincidence, unless capsaicin has some general destructive properties.

It is neither a coincidence nor capsaicin has general destructive properties. In fact, capsaicin is being used as an analgesic too. See this article:

Capsaicin is a chili pepper extract with analgesic properties. Capsaicin is a neuropeptide releasing agent selective for primary sensory peripheral neurons. Used topically, capsaicin aids in controlling peripheral nerve pain. This agent has been used experimentally to manipulate substance P and other tachykinins. In addition, capsaicin may be useful in controlling chemotherapy- and radiotherapy-induced mucositis.

Its mode of action is, seemingly, somewhat similar. See this:

The mechanism of action of topical capsaicin has been ascribed to depletion of substance P. However, experimental and clinical studies show that depletion of substance P from nociceptors is only a correlate of capsaicin treatment and has little, if any, causative role in pain relief. Rather, topical capsaicin acts in the skin to attenuate cutaneous hypersensitivity and reduce pain by a process best described as ‘defunctionalization’ of nociceptor fibres. Defunctionalization is due to a number of effects that include temporary loss of membrane potential, inability to transport neurotrophic factors leading to altered phenotype, and reversible retraction of epidermal and dermal nerve fibre terminals. Peripheral neuropathic hypersensitivity is mediated by diverse mechanisms, including altered expression of the capsaicin receptor TRPV1 or other key ion channels in affected or intact adjacent peripheral nociceptive nerve fibres, aberrant re-innervation, and collateral sprouting, all of which are defunctionalized by topical capsaicin. Evidence suggests that the utility of topical capsaicin may extend beyond painful peripheral neuropathies. 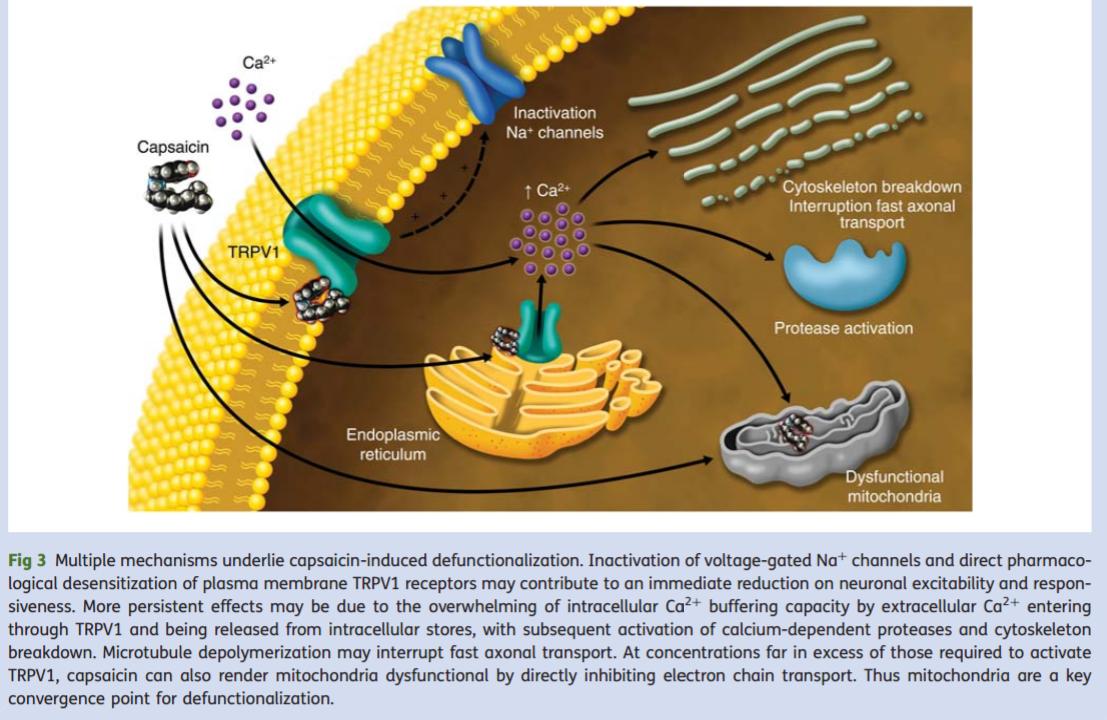 (P.S. substance P is a neuropeptide, a potent vasodilator & iniates expression of almost all known cytokines.)

Pay attention to the last line 'utility of topical capsaicin may extendbeyond painful peripheral neuropathies.' i.e. capsaicin may have more effects on body than known!

Capsaicin binds to an ion channel that is fairly well-conserved across metazoa and fungi. Influencing the activity of an ion channel can have a seemingly small impact on us (e.g. spicy food 'taste') but for a colony of fungus, such activity can cause the individual cells to stop dividing or migrating in a certain direction (fundamentally changing their behavior). In other words, capsaicin can be lethal or at least make living difficult! For more information about these channels and the specific mode of action of capsaicin in mammals, see David Julius' lab website.

Not the answer you're looking for? Browse other questions tagged evolution biochemistry botany or ask your own question.

11
Why are there nail growth differences between humans and other mammals?
6
Why did mammals evolve to have two testes?
4
Why are some fungi poisonous?
4
Why insects are so small compared to mammals?
2
How closely related are two parasites Giardia intestinalis and Trichomonas vaginalis?
10
Why does cucumber skin kill ants?
5
Why are mammals the only animals with pinnae / outer ears?
1
Why are smaller mammals more prone to cancer and tumors
3
Why are fatty acids synthesized in two carbon units?