I am trying to understand the Universal model of energy flow by Odum. 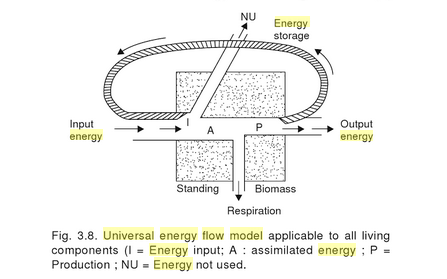 In this linked diagram I is the input energy(the amount of energy present in the food consumed by this tropic level, say its, the 2nd tropic level, the herbivores), part of this food is excreted as undigested food (the NU) , the rest is digested, absorbed and assimilated reaching the cells and then the energy accumulated at cellular level is called the assimilated energy (A). Now part of A is utilised to make ATPs that are being used to fuel the metabolisms occurring in the organisms which is represented by R and the rest is available to the next tropic level(?) as P ?

Then what makes the standing biomass? The organisms the are not eaten up?

Besides I don't understand the Energy Storage part. What physiological process corresponds to this?

If you were to take a snapshot of the biomass present for a species at an instant of time, that would be its standing biomass. So, in a way you are correct with "the organisms not eaten up". But this can be quite misleading when used to attempt to explain pyramids of production up trophic levels. For example, in some aquatic ecosystems the standing biomass of primary consumers is greater than that of primary producers. On study in the English Channel showed 21 g/m3 of zooplankton but only 4 g/m3 of phytoplankton. This is due to the rapid proliferation of the phytoplankton and the rapid consumption by the zooplankton.

Typically it is preferable to describe the energy flow through ecosystems in terms of energy units, Joules for example. However, you could do this with biomass if you summed the biomass produced over time. When done like this, the English Channel example would look like a proper pyramid with the producers out-massing the consumers over a meaningful period of time.

Energy storage is simply the energy stored in the chemical bonds of the molecules created during growth that add to biomass.

My example, and context, is from Biology, Campbell & Reece, 7th edition.

Not the answer you're looking for? Browse other questions tagged homework ecology or ask your own question.

2
Energy flow in an ecosystem
4
What does the energy in an energy pyramid represent?
2
How do I determine this logistic growth model formula?
2
Original Lotka–Volterra model