How do chameleons signal cells to change color?

I have read about how they can change color, but is there literature about the chemical signaling process they use to do so? I read that it could be some combination of hormones and neurotransmitters, but I couldn't find specific information on the receptors or chemical mechanisms.

As said by @dblyons, there has not been a lot of research (biochemical) on chameleons. So, the exact part of mechanism that you're looking for is still not understood. However, we have recently caught the broad end of the stick. Chameleons don't have special cells for color, their complete skin has a layer of pigments (dermal iridophores) which helps them in changing color. See this (or this) article:

These guanine crystals are actually like colorless mirrors, but by changing the distance between these crystals, wavelength of light absorbed (and reflected) can be changed. It is quite similar to how the color of ozone changes from pale blue in gas to violet-black in solid form. However, how chameleons trigger this change in distance of crystals, is not yet known.

This is how these crystal lattice works: 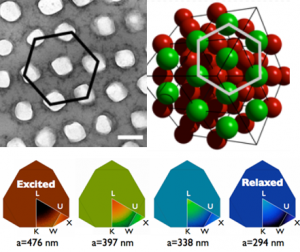 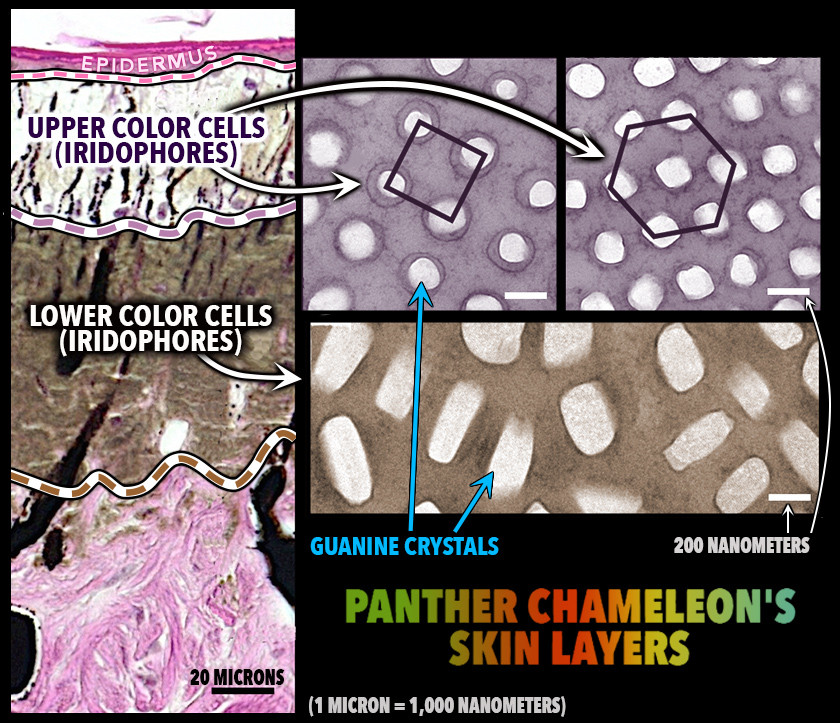 This is what a guanine crystal looks like ((a) is guanine):

You can also see a nice real-time video of guanine crystals changing color of chameleon here.

The color changing portion of skin has 3 main layers:

As I said already, the exact biochemical signalling process behind this process is not known yet. It could be complex hormonal or neurotransmitter signals. However, hormones are considered as the main triggers because chameleons have been shown to change color due to changes in mood instead of environmental protection.

Cephalopods such as the octopus have complex chromatophore organs controlled by muscles to achieve this, whereas vertebrates such as chameleons generate a similar effect by cell signalling. Such signals can be hormones or neurotransmitters and may be initiated by changes in mood, temperature, stress or visible changes in the local environment.

This is a good question and... kind of remarkable because I don't think there is a specific body of literature regarding chameleons.

Generally though, vertebrate skin cells responsible for color (these cells are called chromatophores and arise from the neural crest during development) are responsive to the hormones melatonin, MSH, and others. These hormones, which are released from the pineal (melatonin) or pituitary (MSH), bind GPCRs on the surface of the chromatophores which elicit intracellular activation of PKA, for instance. This activity can cause mobilization of pigment within the cells. This article about fish coloration may help guide you somewhat in your studies, but chameleons in particular seem like an understudied clade of color-changing animals!

Not the answer you're looking for? Browse other questions tagged biochemistry endocrinology cell-signaling or ask your own question.

1
How do signal transduction pathways utilize transcription factors to express a specific gene?
1
How are Thyroid Stimulating Ab destroying thyroid tissues?
4
Do two hormones have the same effect on a cell if the second messenger is the same?
2
difference between neurotransmitters and hormones
2
What is the difference between a cytokine, a hormone and a protein hormone?
6
How do DNA, enzymes, hormones etc. reach their proper cellular locations?
0
Glucose 6-phosphate dehydrogenase: reaction mechanism
1
Differences between neurotransmitters and neuromodulators