How is the rate of gluconeogenesis controlled in the cell?

As far as I am aware, all steps in glycolysis are readily reversible except the phosphorylation of glucose, the phosphorylation of fructose6 phosphate, and the phosphorylation of phosphoenolpyruvate to pyruvate. I understand how control of the rate of glycolysis can be achieved through allosteric means (for example glucose 6 phosphate inhibiting hexokinase in muscle cells, phosphofructokinase being under allosteric control of the ATP/AMP ratio in muscle or hormonal control via glucagon in liver), however how is the rate of gluconeogenesis controlled compared with glycolysis? When a cell has a high rate of glycolysis, then as the rate of forwards reaction increases the concentration of substrate for each gluconeogenesis reaction also increases. Thus there must be some way to shut off the gluconeogenesis enzymes.

I would be grateful if someone could explain how the relative rates of glycolysis and gluconeogenesis are controlled, and perhaps if this varies according to the cell type (muscle/liver cells etc).

I was also wondering whether every cell is capable of gluconeogenesis. I was considering putting this on a separate post so that there is only one question per post, but I thought that it is quite a short question so it may be better to put it here.

In mammals gluconeogenesis occurs primarily in the liver (together with the kidney to a much smaller extent). When the blood glucose concentration falls, it is the role of the liver to generate glucose for other tissues that are dependent upon it.

Hormones play a key role in this. If one considers the decrease in blood glucose concentration during starvation, this is signalled by a decrease in the concentration of insulin and an increases in the concentration of glucagon. These have differentials effect on the uptake of glucose by different tissues, depending on whether they have receptors for the hormones and the consequences within the tissues, and mass action effects of metabolites will certainly influence whether glycolysis or gluconeogenesis occurs in liver.

However, you are correct in your concern that there must be a way to prevent the futile cycling of intermediates through the different reactions of the three steps that differ between glycolysis and gluconeogenesis. The short answer to how this is accomplished is that the concentrations of various metabolic intermediates change during starvation/feeding, and that these intermediates are allosteric regulators of the reactions, switching one off and the other on. This is described in the section on Regulation of Gluconeogenesis, in Berg et al. (available on-line), from which I reproduce the diagram below (Fig. 16.30). 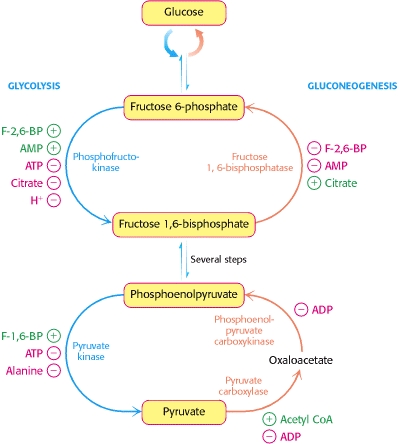 Although this diagram illustrates the principle, a few words of caution about the detail are in order. First, the edition of the book this comes from is 15 years old. Second, it is not clear that all the regulatory molecules are effective in liver — some of the work may relate to bacteria. Third, much of the evidence is from studies with purified enzymes. Although it can be shown that an enzyme can be regulated by a particular effector in these conditions, it is different matter to establish that this occurs in a particular physiological condition. Thus, you will need to consult more recent and specialized sources if you are interested in particular details.

Not the answer you're looking for? Browse other questions tagged biochemistry metabolism glucose carbohydrates pathway or ask your own question.

6
Why does muscle tissue have relatively constant AMP + ADP + AMP?
1
What is the use of futile reaction cycling such as Fruc-P to Fruc-BP?
12
What is the purpose of gluconeogenesis?
8
If so many different hormones/molecules work by activating adenylyl cyclase, how do they have different effects?
1
Why are both glucagon and cortisol released in hypoglycemia?
2
What happens to glucose taken up by the liver in type 1 diabetes?
1
Regulation of the TCA cycle and glycolysis by adenine nucleotides
4
Why is fructolysis independent of glycolysis?