Are there parts of DNA that do not have genes?

A question in my genetics class is "Are the number of genes proportional to the genome size?" The answer is "no," and is it because the genome is the entirety of all the DNA in an organism, but that there are some segments of DNA that don't have genes on them? Can someone explain this? Thank you!

Most the genome is not coding for proteins. Here is a pie chart of what the human genome is made of 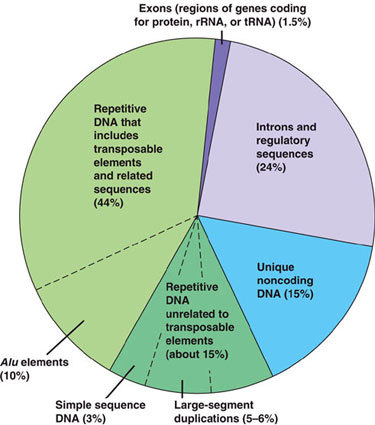 Now, it is worth highlighting that there is a very high correlation between the genome size and the number of protein-coding genes among lineages. Consider the below graph based on data from NCBI genome reports and styled after Koonin (2011). 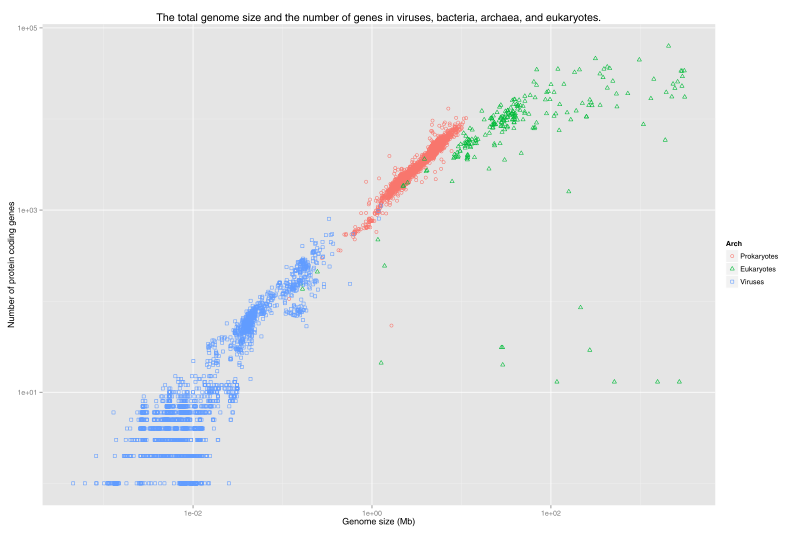 There is a high correlation but there are also important outliers. See for example the eukaryotes (green dots) at the bottom right of the graph (probably mainly polyploid plants) that have very big genomes but relatively few protein-coding genes.

Not the answer you're looking for? Browse other questions tagged genetics dna gene genomes noncoding-rna or ask your own question.

7
Chromosomes are of different size but why do all chromosomes have similar GC percentage?
3
Separating DNA Fragments by Gel Electrophoresis. Are all the strands for one size the same?
25
Do apes and humans share 99% of DNA or 99% of genes? What is the difference?
7
Why is the strength of genetic drift inversely proportional to the population size?
0
Are there genes in sex chromosomes that determine facial features?
3
How many possible human genotypes are there that produce distinct phenotypes?
1
What is the most genetically complex organism?