Possibility of orthogonal view for a creature?

Just a pure curiosity: Does there exist a creature with an orthogonal view to the world instead of perspective? What would be an optical explanation for possibility/impossibility?

Many creatures have eyes on the sides of their head where they cannot have both eyes simultaneously look at the same target. For example whales. Chameleons are well known for having independently moving eyes (though they can align them for binocular vision) 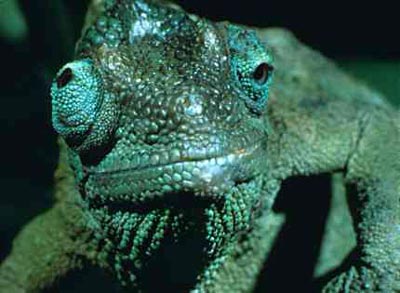 Since all the significant processing of vision occurs in the brain's occipital lobes there is no problem with optics.

The answer depends on the distance between eyes, and width of the objects you are viewing.

The view of a separate object is close to the orthogonal view when the width of the object is equal to the distance between your eyes.

When object is narrower than distance between eyes, you see it in "anti-panoramic view". You will see both left and right side of the object, which is impossible both in orthogonal view and in panoramic view.

Speaking about whole 180 degrees wide visble scene (wider for some animals), the answer is No. You cannot view the whole scene without perspective view, unless you have large number of "eyes" (sensors) that are spread over a large plane. There is no such animal, but you can artificially construct such "perceptor plane" using large number of photocameras.

When looking at the objects of width equal to distance between eyes, if your brain can direct eyes such that their viewing axes are parallel, and could integrated two pictures, then it would view perfectly orthogonal view. This is not what our brain normally does, though. But even with non-parallel view axes of eyes, what we eventually see when brain integrates different pictures the result is not par from orthogonal projection.

9
What gives things their colour?
2
Using perceptual adaptation for enhancing realism of VR/other entertainment
10
What is the field of view for the human eyes?
16
Are 2 eyes necessary for 3D vision?