Great question, the answer has to do with the definition of osmotic pressure and the difference between this pressure and "hydrostatic pressure" which is the water pressure you are thinking of.

Here is the definition of "osmotic pressure" given by Google:

the pressure that would have to be applied to a pure solvent to prevent it from passing into a given solution by osmosis, often used to express the concentration of the solution.

Osmotic pressure in this definition is best illustrated by the commonly used tool to show osmotic pressure, often seen in a textbook as something like this: 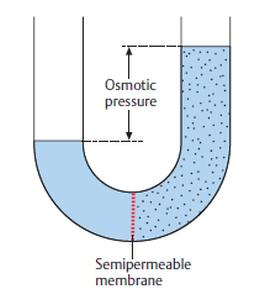 If it helps, I think it would be appropriate to think of this as sort of a "suction" on the water. Net flow of water stops when:

...on the right side of the diagram.

Why the flow is taking place? Whatever going on molecular scale; on gross-scale we can imagine a 'pressure' that is driving the solvent only. (As we know, to pump a fluid we need to generate a difference in pressure). But it is not actually a real pressure. It is just used to measure/ describe the "Tendency to suck solvent". Now we have to "define" this pressure. 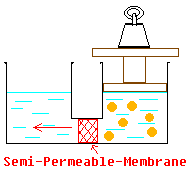 Fig-2: A piston has been added on the second container of system-1, with which a variable (as we wish) amount of pressure could be applied on the content of right container.

We can see the following 3 conditions:

A. Below a certain applied pressure, osmosis continues, but the rate is lesser than no-piston (system-1)

C. Above certain applied pressure; the solvent follow a reverse path. i.e. get squeezed out back-to left container. This is called Reverse osmosis.

Condition- B; i.e. the applied pressure at which the flow stops, is considered as the magnitude of osmotic pressure.

The standard treatment of osmosis in thermodynamics employs the concept of the chemical potential and does not give any clues how the process "really" works.

The answer is controversial; and there are 3 hypotheses. 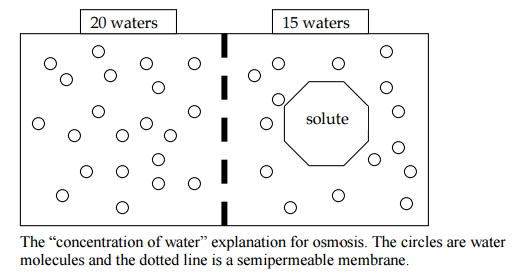 But they also told that this theory doesn't work. See appendix section of the paper. 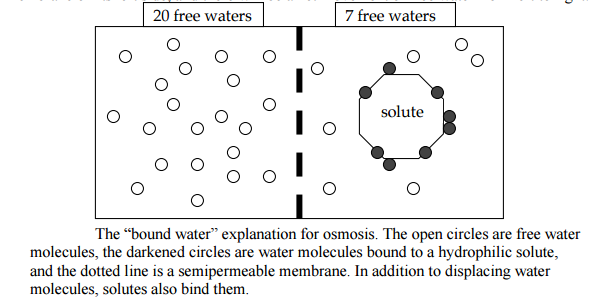 According to this hypothesis; due to the attraction (or hydrophilicity) the solute molecules bind the water; thus decrease water's concentration.

The paper told this theory is proven wrong because:

If the bound water explanation were true, we would expect that a greater mass of hydrophilic solute would bind more water. Whether a certain mass of solute is present in a few large molecules or in many small ones shouldn’t matter.

And in wikipedia's language (latest edition),

" The "bound water" model is refuted by the fact that osmosis is independent of the size of the solute molecules—a colligative property".

But this argument is not clear to me, I confess, because if solute particles break into fragments; the exposed area should be increased, so, more surface area would become available to get bind with solvent; and vice versa if more than 1 solute particles bound with each other the surface area should get decreased. So I did not understand why they thought the attraction model conflicts with number-of-particle theory.

Though its derivation is thermodynamic (using concept of energy loss-gain); (And I confess, I've not understood whole mathematical derivation), I could not found any portion of it directly claiming a physical mechanism. However according to wikipedia;

It is hard to describe osmosis without a mechanical or thermodynamic explanation, but basically, there is an interaction between the solute and water that counteracts the pressure that otherwise free solute molecules would exert. One fact to take note of is that heat from the surroundings is able to be converted into mechanical energy (water rising).

6
How does a Na+/H+ antiporter drive osmosis in this "osmotic motor"?
2
Osmolarity vs. Tonicity
3
Osmotic Pressure Clarification
2
Giving a sign to Pressure Potential, Osmotic Potential And Other Similar Quantities
0
Osmotic pressure and turgor pressure details