In a benign tumor, p53 gene does not work. I know that our cells constantly are mutating and the p53 fixes this. Hence, why does it take so long(or in some cases never) for a benign tumor to become a malignant one? I would imagine a malignant cell would rise rather quickly.

There are a number of main reasons for this: The main reason here is that there is more than one needed to transform a cell. This is usually the silencing of tumor suppressor genes like p53 and the activation of proto-oncogenes. Only one of these is not sufficient to transform a cell. This is also seen in melanoma, where nevi which carry the activating BRAF V600E mutation (which is the most often occuring activating mutation in this cancer) can stay silent for a lifetime. This is called the Knudson Hypothesis (a short overview can be found in reference 1)).

So the turn-off of the control system is not enough, the cell needs to be further pushed to become a cancer cell. More details can be found in reference 2

Then, our immune system is very good in catching cells, which have gone malignant. Most cells, which turned into cancer cells, are eliminated by the immune system. This idea has been first formulated by Paul Ehrlich in the late 19th century, see the references 3 and 4 for details. The figure from paper 4 shows this schematically: 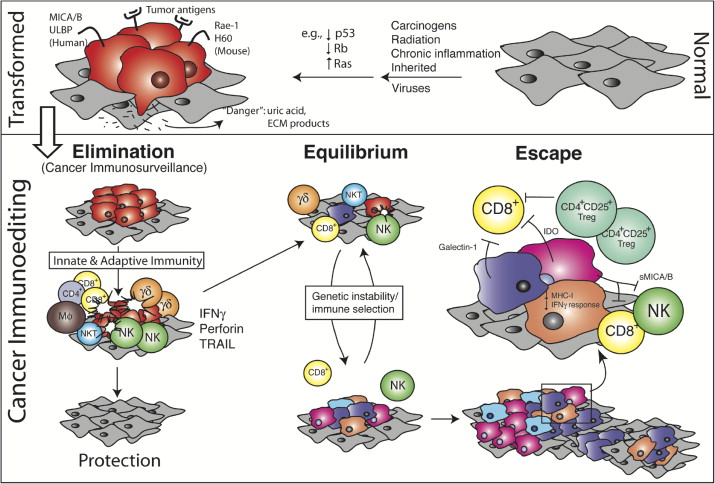 Not the answer you're looking for? Browse other questions tagged mutations cancer or ask your own question.

1
Smoking, cancer, correlation between quitting smoking and increased immediate risk
4
How is the growth of benign tumors suppressed?
17
Contact Inhibition of Cell Division: Signaling Pathway
6
Why do epithelial cells arrest in response to serum?
8
Is Mutation Theory still "valid" for complex organisms?
8
Why might long telomeres be selected for in laboratory mice?