Well, how does the digestive system of Anopheles distinguish the gametocytes from other stages of malaria parasite? Or, is there any protective mechanism for gametocytes to stay untouched in face of digestion in Anopheles crop?

Short Answer: Nothing prevents it, most Plasmodium (gametocytes/gametes/zygotes/ookinetes) are killed.

Background: After lots of search, I finally found a definite answer about this. According to Smith et al, 2014, the survival rate of Plasmodium in the Anopheles gut is very low. At each developmental step during their life cycle, a large proportion of Plasmodium face the deleterious effects of the gut (albeit they are not certain that the effect possesses contribution from enzymes). As an example, even if an Anopheles mosquito ingests thousands of Plasmodium gametocytes, about 50-100 are able to develop into ookinetes while only about five survive to form oocyst. This is why even in high transmission areas, majority of Anopheles mosquitoes are not infected by Plasmodium parasites. See this image: 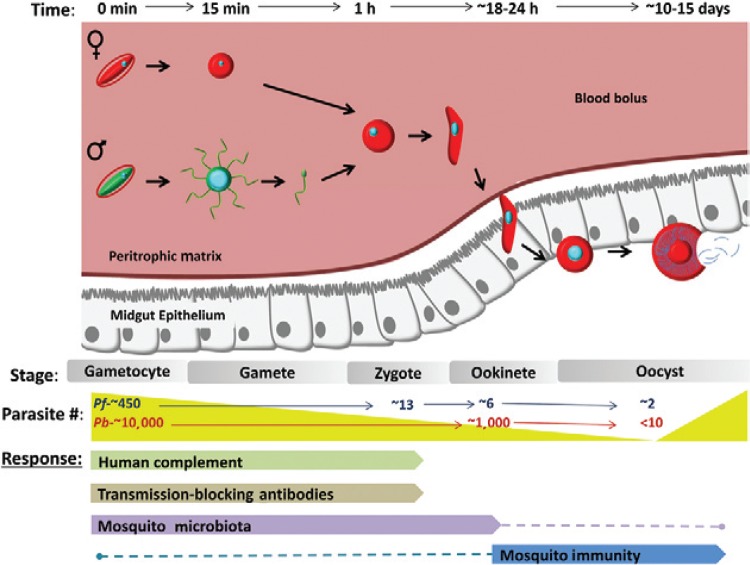 Pay attention to 'parasite #' and see how the number of parasites keeps on decreasing during different stages of development of Plasmodium.

Disclaimer: I am trying to answer the question without finding any academic research on the topic. So, appreciate hypotheses and feel free to point out mistakes.

The answer to this question is not so clear according to known biology, as I haven't found much research in this phenomenon. But, we have to remember that biology sometimes (or always?) doesn't explain why rather explain how.

Hypothesis 1: It could have simply happened that some point in ancient times, the gamete entered the Anopheles crop from a mammal, but not only that; it tried to continue its life cycle on this new host. But, the environment of crop was unsuitable for the gamete to survive due tto digestive enzymes. So, the first few million or billion tries went into vain. But, the parasite slowly started to evolve to adopt in the Anopheles crop.

After 'some' time, the parasite developed a working protective mechanism from digestive enzymes and continued it's life cycle in Anopheles.

As @Another Home sapien points out, there should be some benefits for this evolution. While it's hard to tell exactly what the benefits could have been; I think it's simply to adopt to new potential host's physiological environment.

But why didn't other stages evolve of Malaria parasite in a same way?

This is another hard question to answer. However, it's not so that only the Anopheles and the parasite co-evolve; the mammal host co-evolved too in this period. And the whole system evolved gradually to get to the present life-cycle of malaria.

I think hypothesis 2 is more probable as insects pre-existed mammals. Another hypothesis can be drawn the life cycle of parasite is shaped up simultaneously in mammal host and Anopheles host. But, it's hard to hypothesize what could have happened in this scenario.

2.Article on this co-evolution

Not the answer you're looking for? Browse other questions tagged biochemistry digestion host-pathogen-interaction malaria or ask your own question.

5
Can reptiles digest grains?
3
Anopheles arabiensis lifespan and sporogony duration
5
How do people digest fat after gall bladder removal surgery?
3
Do mitochondria digest fats?
18
How can birds disperse seeds when they are able to digest them?
0
Does pepsin digest plant protein?
2
How can we digest lactose even though it has Beta glycosidic linkages?
2
Why can't humans digest dietary fiber when we can digest starch?