Why are fearful stimuli more powerful at night?

For example, horror movies appear to be scarier when viewed at night than during broad day light.

Does light have any role in this phenomenon?

Are there changes in hormones at night versus during the day that makes fear stronger?

Short answer
The increased fear responses during the night are believed to be mediated by elevated corticotropin-releasing hormone (CRH) levels in the brain that drive the fear responses in the amygdala.

In nocturnal animals, it has been shown that startles are facilitated by bright light. In contrast, fear responses in humans, a diurnal species, have been shown to be stronger in the dark (Grillon et al., 2007).

In the rat, the light-enhanced startle has been associated with the hypothalamic–pituitary–adrenal axis (Fig. 1). Specifically, light exposure has been shown fear mediated by corticotropin-releasing hormone (CRH) (Grillon et al., 2007). 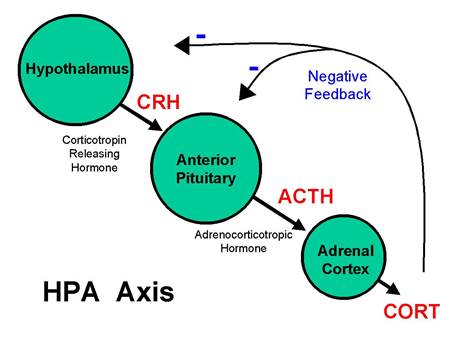 The HPA-axis is affected by the circadian clock and therefore exhibits a pronounced daily rhythmicity. The HPA axis is activated by hypothalamic release of CRH, which stimulates the secretion of adrenocorticotropic hormone (ACH) from the anterior pituitary. ACH triggers the production of cortisol by the adrenal glands. Cortisol, in turn, provides negative feedback and shuts down HPA-axis activity by binding to corticosteroid receptors in various HPA-axis structures, e.g.the hypothalamus (Fig. 1). As a result, cortisol levels show a robust diurnal rhythm that runs in opposite phase with CRH. Cortisol in humans peaks at the time of awakening and drops to its lowest levels around bedtime, whereas the opposite is true for CRH (Miller & Gronfier, 2001).

The startle reflex shows a diurnal variation roughly opposite to the rhythm of corticosterone and in phase with CRH. Specifically, startle responses in nocturnal animals such as rats are highest during daytime (their passive phase) when CRH is peaking, and corticosterone is at its lowest. Conversely, startles are lowest during the night (their active phase) when CRH levels are lowest, and corticosterone levels are high. In man, a diurnal species, exactly the opposite pattern is observed. Hence, startle responses are thought to be endogenously modulated by the circadian system, most likely via effectors of the central pacemaker such as the HPA-axis (Miller & Gronfier, 2001).

CRH receptors are expressed at various brain centers, including the amygdala. The amygdala is a key structure in the limbic system, the emotional control center of the brain. The amygdala is specifically associated with anxiety and fear responses. Indeed, it is thought that CRH receptors in the amygdala are responsible for the fear-promoting actions of CRH (Grillon et al., 2015).

Hence, it is not darkness or light per se that mediate fear responses. Instead, it is the circadian control of the HPA axis that controls the daily variations in fear responses.

7
Why do we fear the night?

12
What can the timing of human urination tell about the human's physical condition and circadian rhythms?
4
What kinds of arousal can a human brain experience?
7
Would constant light or fading light be registered as more wakefulness promoting by the Supra Chiasmatic Nucleus?
3
Photoperiodism: Short-Day Plants
6
What will happen when humans are injected with plant growth hormones
7
Why are we able to differentiate between colored objects without the presence of light?
1
Does night mode on iPhone really help?
2
Is sexual desire stronger in men than women?
3
How do people wake up just before their alarm goes off?
7
Do color-blind people have more rod cells in their retinae than the normally sighted?