Why Is Most Life Symmetrical Externally But Not Internally?

Mammals, reptiles, arachnids, insects, etc are all as far as I am aware symmetrical in appearance.

Take a human for instance, make a line from the top of our head right down the middle. However, internally it is not the same. Our organs excluding the kidneys, lungs, reproductive organs, etc are not symmetrically placed in our body.

First, I think it worthwhile considering 'Why would internal symmetry be beneficial?' Developmental simplicity jumps to mind immediately. You can also consider relationship to external organs; the stomach and esophagus are lined up with the mouth which is symmetrical about the sagittal plane. Or maybe even balance; the lungs are large organs and if put to one side would likely cause locomotive issues. (Perhaps this is even an interesting topic for another question.)

That said, I feel, at it's core the evolutionary advantage which led to the lack of ubiquitous internal symmetry is space. Simply put, there is only so much room inside an organism and every little counts. Thus, if there isn't a need for a particular organ to be mirrored about a plane then there is a benefit in putting elsewhere: utilization of space.

I think a fantastic example of this is the human digestive tract. The key factor in the shape of the intestines is utilization of space, which directly affects the point at which is connects to the stomach, itself contributing to the asymmetrical shape of the stomach. One could envision other configurations, sure, and nature has. However, this configuration works quite well and the extraordinary use of limited space seems to outweigh all benefits of symmetry.

To directly respond to your questions above:

Other fuel for discussion:

In thinking through this question I found myself able to rationalize why internal symmetry isn't necessary. However, I'd be interested in seeing opinions on why, then, external symmetry is so prevalent.

Building on the answer given by Sean Connolly above, it would be very easy to imagine evolutionary scenarios where organs are more likely to develop asymmetrically than symmetrically.

For instance, imagine an organism that has a simple digestive system that consists only of a single undifferentiated intestine that runs directly from mouth to anus in a straight line, as in primitive annelids. Let's say that there is also only one enzyme present to break down the food particles, and that this is present throughout the intestine.

Now, perhaps for space issues, or for reasons that are entirely unrelated to internal organs, the intestine itself becomes asymmetrical. This could be because a longer intestine is needed to dissolve and take up more of the food, but the organism cannot become longer (for instance, it might live in dead coral reefs, and the size of the hollows cannot be controlled by the organism itself, so there is an external limitation to how long the organism can become). One way to solve this would be to fold the intestine, which can make it asymmetrical.

Now, because food particles that enter the mouth are exposed to the single enzyme throughout the intestine, the gut fluid will be less and less nutritious the farther posterior it gets along the gut. Possibly, more anterior parts of the intestine will become specialized in breaking down and absorbing more frequent kinds of food, while more posterior parts will become specialized in less common foodstuffs. This could lead to differentiation of secretory organs along the intestine, and if this is already bent because of external selection pressures, it is not impossible that a given secretory organ will develop asymmetrically simply because the intestine at the point where the enzymes secreted by this organ are to be used is not near the mid-line of the body.

This is, of course, pure speculation, and I know of no example of this, but it is one that is not at odds with evolution in general, and could certainly be plausible. The same could occur if differentiation of enzyme secretion organs occur in a symmetrical gut, which later becomes asymmetrical and the whole secretory organ becomes displaced to one side. Retaining a symmetrical pair of secretory organs on each side of the body, but having the enzymes work on food only asymmetrically would imply that one of the secretory organs had a very long duct and the other had a very short one. It is reasonable to assume that over evolutionary time, the one with the long duct would become less important and may disappear.

A similar reasoning could be applied to the blood circulation system and any organs relevant to that.

You change one thing and you have to change everything else to compensate.

Lets look at what organs are not symmetric in tetrapods, the heart and the digestive system, everything else is symmetric. Note these are symmetric in more basal vertebrates like fish.

the heart starts symmetrical in vertebrates but that changes when animals evolve independent circulatory systems, that is flow of blood to the lungs that is separated from the flow to the body, allowing for differential blood pressure. that evolved by having one side of the heart supply the lungs and the other supply the body, since they have vastly different blood pressures it would make sense the sides of the heart creating that blood pressure would also be different. this change in shape forces some asymmetry on the lungs that have to share space with the heart. 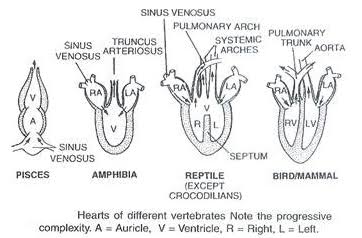 The digestive system is even easier, again it starts as a straight tube, but two major changes occur. first a longer digestive track allows you to extract more nutrients, and making a human (or nearly any animal) long enough to hold a straight digestive track of the same length would be incredibly wasteful. For scale the human digestive tract is about 10 meters long.

The other change is the development of the stomach (which not all vertebrates have). having a portion of the digestive system dedicated to storage and soaking is useful by allowing animals to eat larger quantities when situations allow without having to hurry it through the digestive system and lose most of the benefits. And again the only good way to enlarge a section of a straight tube without elongating the body is to have it turn and be offset, this forces many other organs out of place (liver and spleen) which attach along the digestive tract's length. Note in many fish this is all still symmetrical, but this changes when they evolve away from a tall thin cross section into a more rounded cross section which is favored in shallow water and eventually life on land. Once that happens you can't simply stack everything up along the mid-line without wasting a lot of space.

you can see how changes to the digestive track might evolve in many different lineages that change the shape of the body like crabs or molluscs. which are the other groups with asymmetric internal organs. Note these other two groups are often externally asymmetric as well. Snails in particular because they changed a long straight shell into a compact coiled shell, which forces asymmetry on many systems.

I would like to add an answer here to explain how the internal asymmetry of animal organs might be consistent with their external symmetry. Here's my argument:

1) In the case of vertebrates the important internal organs are protected by the animal's skeleton.

2) The internal organs are soft matter and so their physics is very different from how they would behave if they were nearly rigid bodies.

3) Internal asymmetry isn't a big issue because the mass distribution is approximately symmetrical in a bilateral sense.

To make this concrete I mean:

b) The left and right sides of the vertebrate's head have approximately the same weight...etc.

Imagine that the intestine is a long, symmetric, flexible tube, about 20 feet long. Now imagine what the tube would look like if it were packed into a 5-gallon bucket. It would be literally, mathematically, impossible to pack it in symmetrically. In physics we call that "spontaneously broken symmetry". It would take a lot of genetic instruction to pack a long intestine into a small volume even approximately symmetrically. Of course this doesn't explain all the asymmetry you're wondering about, but does explain some of it.

Not the answer you're looking for? Browse other questions tagged evolution anatomy organs or ask your own question.

6
Symmetry of species
3
Why does our body exhibit bilateral symmetry?
2
Why is there symmetry in animals?
1
Symmetry in animals
84
Why is the heart not in the middle of the body?
8
Why are humans and almost every species on earth symmetrical?
2
Why do the neuron pathways decussate?
1
Is there any evolutionary/physiological advantage to multi-lateral symmetry?
0
Why heart is on the left side?

4
Why is most tissue cellular?
4
Why is the liver the only internal organ of the human body to regrow?
9
Why do most mammals have long snouts?
8
Why are humans and almost every species on earth symmetrical?
3
Why do farts stink, but perfume does not?
5
Why do snakes not have eyelids?
13
Why are there not two trees of life?
1
Why do our bodies maintain blood pressure but not the flow rate?