On the selection coefficient

In this book the author talks about selection coefficients which, if I understand it correctly, can be calculated as finiteness arithmetic means (for each allele).

My question is: should this calculation be made assuming a ceteris paribus condition?

Hoping you can read a code in R, the easiest is probably to read some code that make a simulation and look at the output. So here is a code that performs simulations. The key difference between simulations with spatial and temporal variation is the line that gets fitness value (runif). 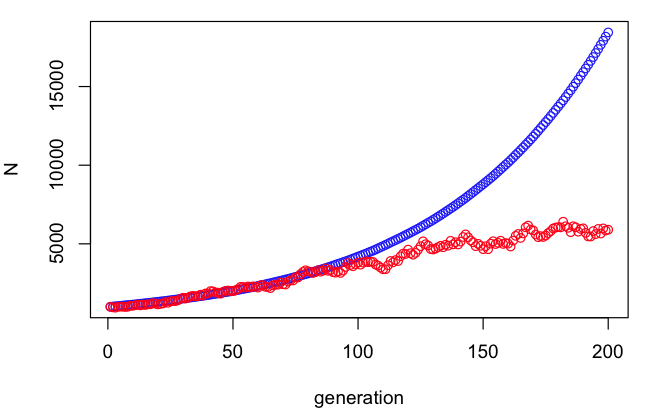 Whether the arithmetic or geometric mean fitness matters most will affect the reproductive system that will be most successful. In this regard, you should read Ripa et al. 2009 about bet-hedging

Not the answer you're looking for? Browse other questions tagged genetics evolution population-genetics theoretical-biology or ask your own question.

2
Coefficient of relationship and path of coefficient
5
Evolution and the levels of selection
4
Is our genome decaying (see "Genetic Entropy"), and, if so, is this evidence for our genome being "young"?
2
What is a typical value of the selection coefficient s?
3
Dominance coefficient
1
How do we formulate the mutational load for "junk DNA"?