maybe this is more bioengineering than biology but I didn't find any such group.

So I got the following photo: 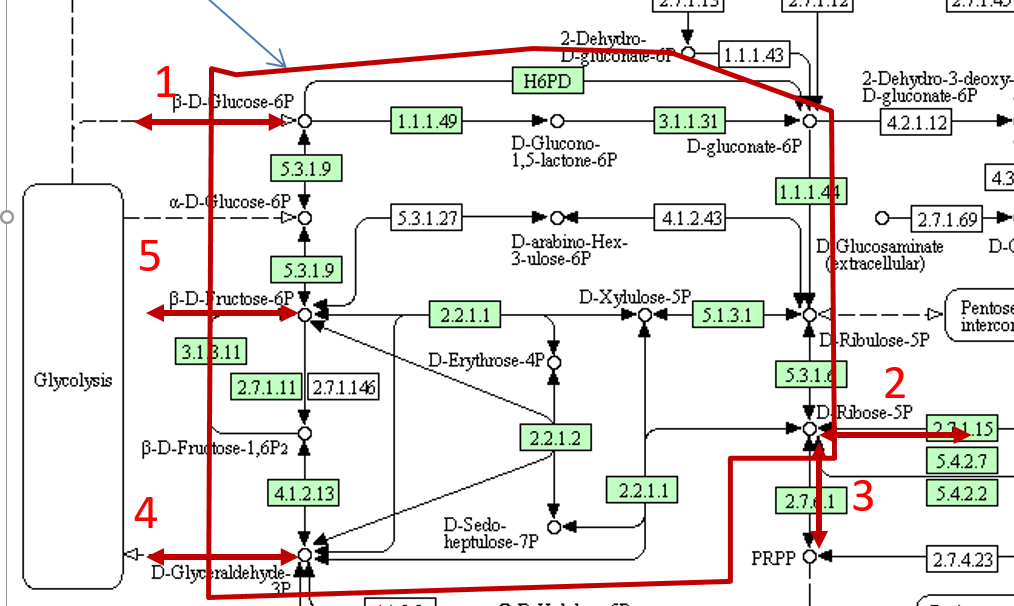 I know that for the first one the columns are the reactions taking place and the lines are the "chemicals". Should the markings on the columns be the same as the numbers that are written on each reaction? (like "3.1.1.31") Almost every reaction can go in both direction, is there anything that says which chemical should get minus and which one gets plus? My attempt at the matrix was:

As for the pathway map, isn't that basically the photo is given?
And finally what would be a "primary metabolite" in this case?

This is not a particularly well written homework question. I'll try to give some hints based on how I interpret it.

1) The stoichiometric matrix. You have exactly the right idea. I would write the reactions as enzyme names or gene names instead of the EC numbers (e.g. G6PD or G6P dehydrogenase instead of 1.1.1.49). For the reversible reactions, there's no a priori reason to write them in one direction or another, but convention would be to make glucose consumption the positive direction. I would not include "glycolysis" as a separate reaction. I would also consider including cofactors and byproducts in the molecules affected by the reaction (e.g. CO2, NADP+, NADPH, (maybe ADP, ATP, NAD+, NADH also if those come up)).

2) Yes, it's basically what you already have. It's not a particularly great diagram, so you could draw it in a clearer way.

3) I have no idea what this means, but perhaps the next point will help.

4) Primary metabolite is not a super well-defined term, but I think in this context, I would say that the way they're intending the question, they're looking for a "total pathway reaction" that describes the net inputs and outputs of the pathway.

I'll leave it to you to figure out what the X's are or whether I left anything out (since it's a homework assignment after all.)

Not the answer you're looking for? Browse other questions tagged molecular-biology bioinformatics theoretical-biology or ask your own question.

4
Plotting metabolic networks?
3
How to get the correct RefSeq Protein transcript for a given RefSeq Nucleotide transcript?
1
How do we formulate the mutational load for “junk DNA”?