The idea of the atom comes from ancient greek philosophers long before one could find any evidence for it. Although their views on what atoms look like and how they behave were incorrect, one could later refine this model through evidence and experimentation.

I think some good thought could makes us learn what to look for in the first place.

Is this still just a field that science fiction thinks about, or are there any serious publications on this topic? If not, why not?

Clarification: I mean the theoretical design of lifeforms. Not just manipulating and editing existing lifeforms, I mean designing completely new theoreticaly plausible lifeforms, within the constraints of a given environment. On paper or simulation etc, not actually making them physically.

If you find any scientific papers on how and what kind of life could exist for example on Titan, Europa, below Earths crust etc... or any other environment, please link to them in your answer. Thanks!

First, you can check out this Wikipedia entry: Hypothetical Types of Biochemistry. I caution you that the scientific utility of many of these hypotheses isn't great since they are, at least currently, untestable.

Second, your question brought to mind some current research by two groups of scientists in the field of synthetic biology which may, in some way, answer your question. I will briefly mention these below.

Scientists are attempting to create synthetic organisms with minimal genomes (those in which every gene is essential). In one of the more recent studies (Hutchison CA, et al. 2016. Design and synthesis of a minimal bacterial genome. Science.), they randomly knocked out genes of an organism and then, based on survival and growth, classified them as essential, non-essential and quasi-essential (deletion results in growth impairment). They were then able to pare down the genome to 473 genes, which they claim "has a genome smaller than that of any autonomously replicating cell found in nature".

Important points from this research with respect to your question:

In another avenue of research, scientists are attempting to create synthetic cells based on self-replicating RNA and compartmentalization by spontaneously forming fatty acid vesicles, perhaps somewhat plausibly mimicking how life may have arisen on Earth. Of interest to you may be this review (Blain and Szostak. 2014. Progress Toward Synthetic Cells. ‎Annu Rev Biochem.) which, in their words:

[focuses] on bottom-up approaches to the construction of artiﬁcial cells from molecular components or subsystems. We do not discuss the top-down approach of systematically removing genes from extant organisms to achieve a minimal genome, nor do we consider the creation of new types of cells by genome synthesis or extensive genome editing.

They say in the article (emphasis added):

In vitro translation systems have successfully been incorporated into vesicles, resulting in the efﬁcient synthesis of proteins... However, replicating the entire system, including DNA and RNA polymerases, transcription and translation factors, transfer RNAs, the ribosome, and other components, is still a distant goal, and proposals to do so involve more than 100 genes. Properly coordinating the replication of such a large synthetic system may require additional regulatory components.

The answer to this question can go as far as anybody's imaginations. So I'll just tell why the answer is what it is, and try to include scientific facts (possibly with references) wherever possible.

Simple Answer: Designing alien life forms on the basis of current theoretical and practical knowledge of science (if this is what you mean) is still, and seems to remain, a field of science fiction only.

Why? Because, simply, the proposed organisms can be unlimited. Even if this field matures as a science, it will remain as large as the universe itself, because there are literally no boundaries and limitations to speculation and imagination. Only recently have researchers agreed that discovering organisms similar to humans is much much less likely than any layman thinks. Actually, there is even a formula for it, known as the Drake equation after Frank Drake who proposed it. The equation is:

Obviously, this answer comes out to be very small, meaning that intelligent life is very difficult to find. But that doesn't mean finding life is difficult. And this claim gets even more support when scientists find water on mars and even mercury! Now, to give a bit of knowledge, this field is not really limitless; there are (at least) two limits (i.e. I'm not including more). The first limit is source of liquid water$^*$. Now, knowing that water is easy to be found almost anywhere, this does not seem quite a difficult one. Another one is source of energy. Now this is a difficult one. The problem with discovering life (in near future at least) is the area in which we are searching. Most of the searches (by telescopes of course) are being conducted near red dwarf stars. There are quite some reasons for it:

But being less shiny also poses a problem: too little energy for life. Red dwarf stars emit most of their radiation in the infrared portion of spectrum, which is pretty useless for plants (on Earth at least). Now, to survive in a red dwarf system, plants need to capture infrared light. Thus, the speculated plants in red dwarf systems will be pitch black just to absorb more energy. Also, red dwarf stars are pretty lightweight, as less as 7.5% of sun. This means they have less gravitational pull i.e. they will have much lighter planets in their Goldilocks zone. Now, much lighter planets means much less gravity on planet's surface. Thus, the speculated plants in red dwarf systems will be a lot higher than plants on Earth. But, less gravity also means much less density of air even on surface. Now, you can interpret it yourself. And, not just to surprise you, there would be absolutely no surprise if in future a satellite discovers silicon-based life, because it is really possible for life to emerge from silicon instead of carbon!

$^*$why I am continuously saying liquid water has a reason. Water is actually one of the very few candidates that can serve the purpose of maintaining life forms. Its one of a handful of liquids which are liquids at desired temperature. As one might think, life cannot survive below a certain temperature, simply because below that temperature, the liquid itself would absorb all the metabolic heat from organism and evaporate. So, it is quite relevant to say liquid water here.

What I meant to say is that there are technically no boundations to designing alien life forms, as long as you talk about the whole universe. So, this does not really count as science. After all, if you search science definition on Google, you get this:

the intellectual and practical activity encompassing the systematic study of the structure and behaviour of the physical and natural world through observation and experiment.

This does not include imagining alien life forms in any way. So, I do not think this subject would ever be considered as scientific by the scientific community. Mostly, scientists are not indulged in this kind of work because they like to observe and interpret natural phenomena rather than imagining them. Scientists make laws from nature rather than applying laws on nature. Still, there are some scientists who take this matter seriously and publish scientific papers about it. I could find only one (PDF) related to this point. You might get some more on the internet.

In the end, if you think about how plants would look on a planet in a red dwarf system, you might end up with this: 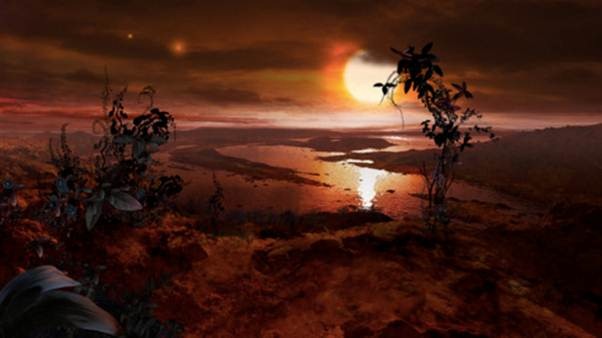 Bonus: Dawn space probe from NASA has detected organic materials on Ceres(!) Now, what kind of organisms would you expect to see there based on our current knowledge about Ceres?

Is there a biological field for designing life?

The field is called synthetic biology. It is a very new field. With not many player. Currently being constructed is a synthetic yeast Sc2.0. There is attempts to get interest and funding for a synthetic mammalian genome. The synthetic human genome HGP-Write.

More serious work is adapting life to do something. Stuff that we are more familiar with like GM crops. De horned cattle. Better race horses. etc

Not the answer you're looking for? Browse other questions tagged evolution life astrobiology or ask your own question.

2
Synthetic life creation - status of attempts
2
What would it take to create life?
2
How many genes are needed for a living organism?

2
Are humans still competing in the same way now that the first life forms did?
11
Why, specifically, does each generation, on average, improve upon the design of the species rather than degrade it?
6
Are there known examples where an evolved mechanism "echoes" one originally provided by the environment?
0
Are Males the main evolutionary tool for production of genetic variation necessary for evolution?