If a human body were somehow to be kept at a cold temperature (say 30C) for the entire life of the given individual. And somehow the brain could be fooled into thinking that this 30C feels nice and warm.

Would that given individual live longer as a consequence? What effect does a tempreature have on lifespan?

If you had a normal human with a 30C core temperature starting at birth, I have doubts that it would live any longer than a human at 36.8C. Unlike flies, which are ectotherms, humans need to have a more or less constant temperature to successfully complete most of their metabolic processes efficiently. Since humans are not built to withstand extremely low temperatures, it is likely that lowering the core body temperature to 30C will cause it to have organ impairment, causing organ failure, followed by death. Though you might be able to "fool" the brain on thinking that 30C is normal, it is unlikely that the organ functions can follow. It could be possible to breed successive generations of humans in ever-lower temperatures, but it is unlikely for a baseline human to withstand such a large temperature drop. Sensory neuron adaptation =/= bodily adaption. However, lowering the core human body temperature by 1-2 degrees (typical of sleep) may have a chance of altering a human's lifespan in a more meaningful way. Though cooling may prolong the lifespan of temperature-conformers and single-celled animals, it is unlikely that the same can be said for endotherms. Endotherms have had biological processes that run on a fixed temperature for a long time already. One more thing: @Hermann: Their core body temperature may not have been much lower than the baseline.

In humans the optimal temperature for enzymatic action is 37 C. See the image below: 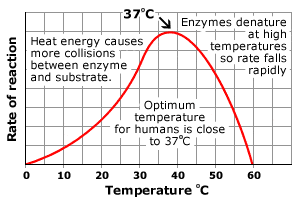 Our body temperature is set at 37 C (~ 97 F) because all our metabolic processes are most efficient at this point. Any decrease in the core temperature will cause a drop in all the metabolic processes imitating hypothyroidism. Hypothyroidism is a very unpleasant condition to live with - extreme fatigue, inability to utilize the energy stores, very poor appetite with increasing fat stores are few of its symptoms.

For humans to efficiently operate at lower temperature the DNA has to be remade to code for enzymes that would not loose their efficacy at a lower temperature - maintaining a good reaction rate. This is impossible as of now where even a single gene modification or single nucleotide correction is extremely difficult and is under experimentation.

Movement is life. If the human body where to undergo this kind of temperature that would be below the normal temperature for the human body, we would in fact either have to move more and or do more as in eat, exercise, communicate etc. If your body did not have this mental capacity basic survival skill you would be in the process of slowing the function of your body down leading to death.

Also the person who had swam in freezing water had a better tolerance to the cold than normal, but this does not mean that if a person had the capacity to tolerate cold temperatures that this kind of treatment of the body whould be good for you. Over a short period of time your body can undergo extream circumstamces so it was a basic survival skill that had kicked in from the metal material of that persons being telling their physicsal as in nervous system that if they were going to survive they would have to move in order to regulate their body temperature.