Are there any examples in nature of two polypeptides joining into a single, continuous, third polypeptide?

Are there any examples in nature of two polypeptides join into a single, continuous, third polypeptide like this:

And if this exists, is there any term for the phenomenon?

I am not aware of anything precisely corresponding to your diagram, but the somewhat related behaviour of inteins may be of interest in this respect. They are defined in Wikipedia as:

An intein is a segment of a protein that is able to excise itself and join the remaining portions (the exteins) with a peptide bond in a process termed protein splicing.

So, unlike either ribosomal or non-ribosomal polypeptide (e.g. antibiotic) sythesis, they catalyse a peptide bond between peptides rather than an amino acid and a peptide. However these are already part of single polypeptide chain before the intein itself is spliced out. 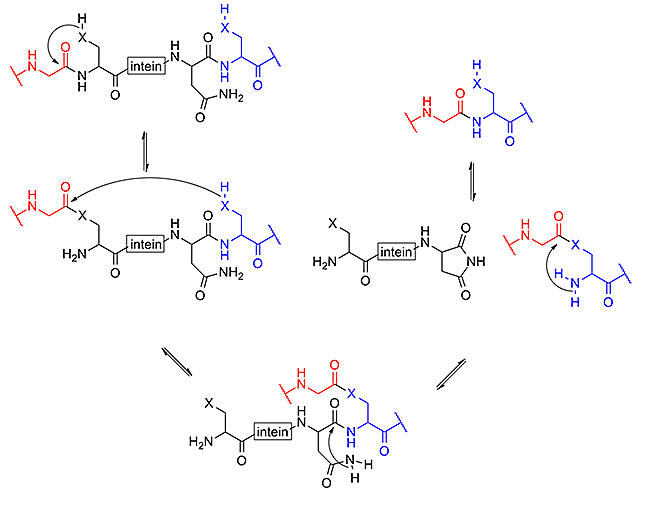 [Modified from Intein_mech.png to fit page. — The mechanism of protein splicing involving inteins. In this scheme, the N-extein is shown in red, the intein in black, and the C-extein in blue. X represents either an oxygen or sulfur atom.]

Does splicing of peptides in the proteasome count? Proteasomes normally degrade proteins into small peptides, but the process is conceptually reversible -- peptide bonds can be generated as well as broken -- which leads to splicing of two smaller peptides into one longer one. There is some evidence that this is a fairly common event:

--A large fraction of HLA class I ligands are proteasome-generated spliced peptides.

Not the answer you're looking for? Browse other questions tagged proteins translation protein-expression or ask your own question.

4
Why don't amino acids get linked in the functional groups of acidic and basic amino acids?
4
Amino acid compatibility
3
What signals a ribosome to stop production when the cell is out of available amino acids?
7
Classifying Polypeptides (and/or Proteins)
1
What difference do trans and cis configurations of amide groups bring to the polypeptide chain?
7
Do proteins generally contain phosphorus and sulfur?
2
What is the structural difference between beta and gamma globin chains of Hb?
1
Do ribosomes read mRNA?
1
Is the phrase "transmembrane segment" equivalent to the transmembrane domain of a protein?