I was wondering whether there are any eukaryotes which never have a diploid phase. I can't think of any. Fungi have diploid stages, and I know any sexually reproducing organisms will have at least transient diploid stages (I am not referring to such transient stages- I mean extended diploid stages so I am counting as a 'haploid' organism one that only ever has two sets of chromosomes for a very short time while it undergoes meiosis.)

Update: There are plenty of eukaryotes that occur in haploid stage as the dominant life cycle stage. See metagenesis in cnidarian animals and "alternation of generation" in algae, protists and fungi. ......

I am not referring to such transient stages.- I mean extended diploid stages so I am counting as a 'haploid' organism one that only ever has two sets of chromosomes for a very short time while it undergoes meiosis.

Most of the Green algae like Chlamydomonas, Volvox, Spirogyra etc. are prominent example.

Among fungi; Mucor, Schizosaccharomyces are some prominent example.

Among Protozoans; an example of haploid life-cycle is seen in Wood-roach(Cryptocercus)'s some gut - microfauna such as Trichonympha 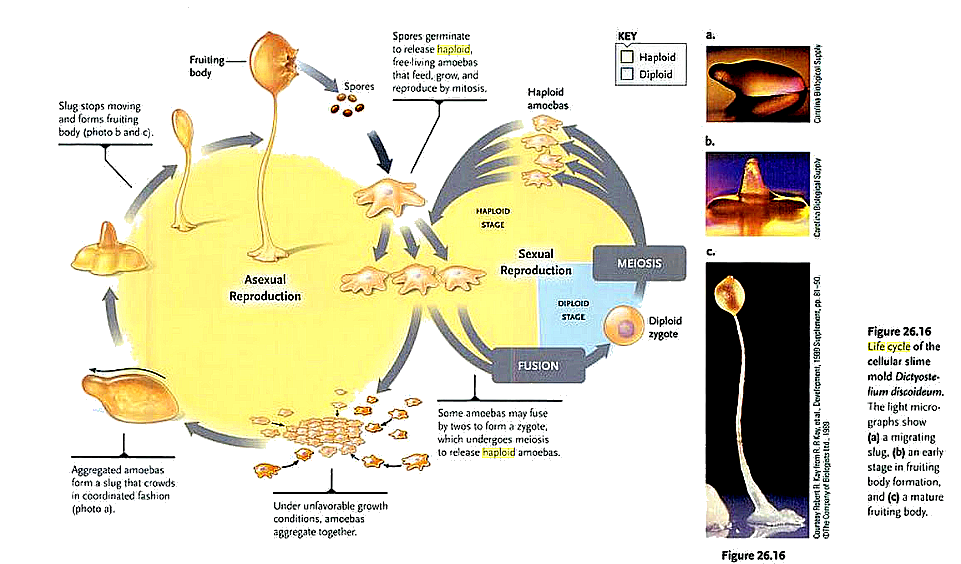 Some apicomplexans such as Plasmodium spp. are haploid during their asexual stages. The organism spends more time (at least in the human host) in the asexual stage than sexual. source

Plasmodium spp. are haploid in both human and mosquito hosts except for a brief stage in the mosquito midgut where two haploid malaria gametes present in the mosquito's blood meal fuse to form a diploid zygote. This zygote immediately undergoes meiosis to generate four haploid cells that continue in the haploid form, reproducing through mitosis, until several thousand are present in a small sac, the oocyst, attached to the gut wall.

Not the answer you're looking for? Browse other questions tagged chromosome eukaryotic-cells or ask your own question.

10
Overlapping genetic information in eukaryotes
9
What determines the number of chromosomes an organism carries?
0
Does A/T, G/C pairing exist in haploid?
2
Is a haploid essentially half of a homologous pair?
2
How does repair take place on leading strand in eukaryotes?
1
How do you differenciate between the eukaryotes and prokaryotes?
1
Are there differences between the activation proteins of Eukaryotes and those of Prokaryotes
3
Why is translation so much faster in prokaryotes than eukaryotes?