Why is glycerol kinase absent from adipocytes but present in the liver?

Why don't adipocytes have the enzyme, glycerol kinase? Wouldn’t it be more efficient for them to utilise glycerol present to synthesize triglycerides than to get it from the liver? So what is the advantage of its absence?

The short answer to this question is given in the Wikipedia article on glycerol kinase:

Adipocytes lack glycerol kinase so they cannot metabolize the glycerol produced during triacyl glycerol degradation. This glycerol is instead shuttled to the liver via the blood where it is: phosphorylated by glycerol kinase to glycerol phosphate and/or converted to dihydroxyacetone phosphate which can participate in [glycolysis or] gluconeogenesis.

[My de-emphasis of glycolysis]

To understand this requires one to consider the different functions of liver and adipose tissue and how they should respond to the fed and fasted state. Then one can appreciate that the differences in enzyme complement are one of the ways by which this is achieved. (The other is their differential responses to hormones.)

The role of the adipose tissue is to store fat (triglycerides) in the fed state and make it available for the other tissues in the body in the fasted state.

The role of the liver is to divert metabolism to the synthesis of fat in the fed state (at the appropriate stage) and to ensure that there is a supply of glucose in the fasted state for those tissues that depend on it (brain, erythrocytes) or a supply of ketone bodies for the brain.

The substrates for triglyceride synthesis are L-glycerol phosphate and fatty acids. There are two enzymes that can catalyse its production, glycerokinase (glycerol kinase) in the liver and glycerol 3-phosphate dehydrogenase in both liver and adipose tissue, as shown in my diagram below: 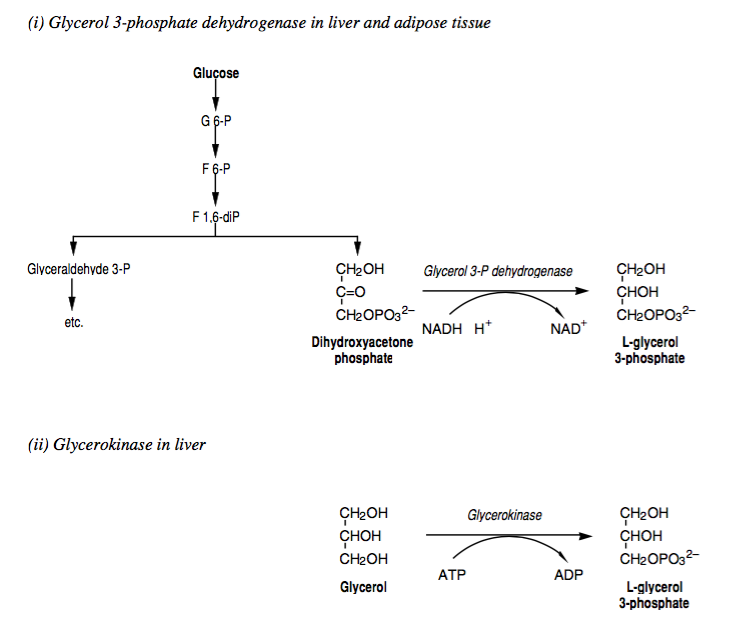 The liver has surplus glucose so it can switch to fatty acid production from acetyl CoA (from pyruvate) and generate L-glycerol phosphate from the dihydroxyacetone phosphate intermediate of glycolysis, catalysed by glycerol 3-P dehydrogenase. This allows the synthesis of triglyceride, which is exported as lipoprotein.

The hormone of starvation, glucagon, initiates the breakdown of triglyceride in the adipose tissue. As already stated, the glycerol produced cannot be used to synthesize L-glycerol phosphate as the tissue lacks phosphoglycerate kinase. In starvation uptake of glucose is prevented hormonally, so that there is no glucose for glycolysis and hence no hydroxyacetone phosphate as a source of L-glycerol phosphate. Hence the fatty acids cannot be re-esterified and are released into the blood for other tissues, i.e. the response of the adipose tissue to starvation is that required.

The glycerol diffuses to the liver where it can be converted to L-glycerol phosphate because of the presence of glycerol kinase. What is the fate of this? It is not converted into triglyceride, it is converted to dihydroxyacetone phosphate by the reverse of the reaction shown. This is not glycolysed, but converted to glucose by gluconeogenesis, the enzymes for which are present in the liver. The glucose is released into the blood where it can be utilized by the brain, i.e. the response of the liver to starvation is that required.

This answer is based on lectures I delivered to undergraduates some years ago, which were drawn from various sources. The problem is that most biochemical texts tend to be organism-agnostic, and any discussion of mammalian tissues tends to be limited. Thus, I can’t find much useful to refer to in Berg et al. on line, except for support in section 16.3 for my assertion that glycerol returned to the liver in starvation is used for gluconeogenesis. I’ll update this later if I find anything more useful.

Not the answer you're looking for? Browse other questions tagged biochemistry metabolism enzymes human-physiology fat-metabolism or ask your own question.

1
What is the energy source for adipocytes?
8
Why are mammals unable to produce Essential Fatty Acids?
2
Is there any disadvantage to having a really low adipocyte count in our times?
1
Why is alcohol purged from the body more slowly when we sleep?
8
Why some cells don't produce purines?
2
why is LPL (lipoprotein-lipase) down-regulated during fasting?
0
Is it possible to stop more/extra fat from being stored in the body?
1
What advantage does lactose have as the main sugar in milk?
1
Regulation of the TCA cycle and glycolysis by adenine nucleotides