I have found a large, wild patch, some 200m long, of mainly Datura Stramonium, in our street. I have always been keenly interested and well read on the shamanic, and - very rare - medicinal uses of this species, but scattered amongst them, like family, are two other plants I don't know, but am convinced are also some kind of Datura. I would please like some help on identifying the other two based on the two photos I have of all three. 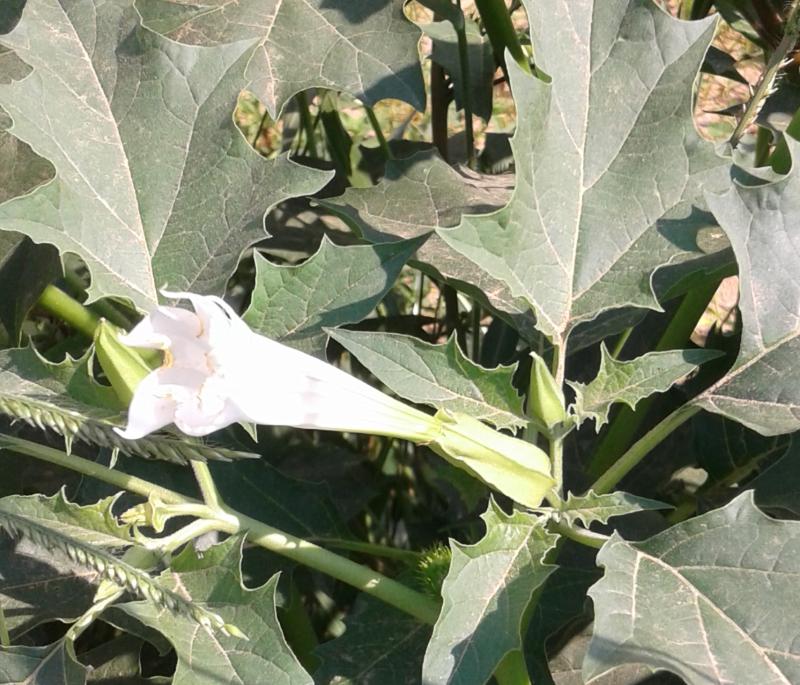 This is the well known - to me - Stramonium flower, the plant characterized by jagged leaves and the well known spiked seed pod of Jimson Weed seeds.

If anyone could please confirm my ID of the Stramonium, and confirm the identification of the second image as morning glory, and suggest what species.

These plants are all around my neighbourhood, with is the northern part of Randburg, South Africa. This city borders on the Northern side of Johannesburg. 1 It's a temperate climate, with very hot and rainy summers, and bitterly cold and dry winters. The soil is reddish and lacks much humus.

It is a semi-rural area, having been rapidly urbanised over the last ten or so years, when it was still just farms and small holdings. Farming is mainly vegetables or lucerne; and lots of maize further out from the city. We are a few km south of the Cradle of Humankind.

1 Strangely enough, there are two cities in the US with the same names, both in California, I believe. I know Johannesburg is.

Okay, so as far as the blue and white flower goes I'm pretty sure it's a cultivar of ipomoea called Flying Saucer which is a hybrid of heavenly blue (I. tricolor) and Pearly gates (also I. tricolor) meaning it's a hybrid and no seed output. As far as the white flowers go it is most likely Datura since it is part of a short shrub and the petals are spiked. However you should determine if it blooms at night because its possible it could be moonflower. It may also be brugsmansia or pearly gates. As far as 'alchemical use' datura contains scopolamine which is potentially lethal if consumed in indiscriminate amounts.

The second flower is, I'm guessing by the valentine shaped leaf and violet tubular flowers, a morning glory vine (ipomoea violacea or ipomea tricolor). These plants both are closely related cultivars of ololioqui and tlitlitzen which had a history of shamanic use in southern Mexico.

The top plant looks like it could easily be D. stramonium. Daturas can be a bit tricky. You should either provide an estimate of the scale or measure the flower, then compare with this simple key of invasive Daturas (in Australia): https://www.samorini.it/doc1/alt_aut/ek/haegi.pdf. It helps to note capsule size and shape. (It is NOT a Brugmansia sp.; those are trees with pendant flowers.) Also, the second flower photo seems to me is clearly a morning glory, possibly as IDed by user29734, and the center leaf seems from the same plant(s) or closely related.