Why is carotene in carrots?

Internet says that the carotene is an important pigment for photosynthesis and UV-protection. That explains its accumulation in leaves. I suppose colored fruits are more appealing to animals, so that explains the fruits. But why roots? Why is carrot full of carotene? The only reason I can think of is human cultivation. Is there any specific reason carrots synthesize so much carotene? Are there other similar examples of so vividly colored roots?

Carrot (Daucus carota) is a biannual plant that accumulates massive amounts of carotenoid pigments in the storage root.

The root of the carrot was not orange before domestication.

Although the root of carrot plants was white before domestication, intensive breeding generated the currently known carotenoid-rich varieties, including the widely popular orange carrots that accumulate very high levels of the pro-vitamin A carotenoids b-carotene and, to a lower extent, a-carotene.

As stated in the comments people did this to give a better taste to the roots. This is simply economical more beneficial because otherwise only the leaves of the carrot could be used for consumption (and not the roots which are a major part of the carrot), wasting this root would result in a lot of waste (and thus a lot of money waste) and because of an increase in carotene (and other compounds which contribute to the flavour) this would save money and provide more tastefull and appealing roots.

It is likely that wild carrot plants had uncolored roots of a bitter taste and a woody core but were initially cultivated because of their aromatic leaves and seeds.

I think this picture will explain it all: 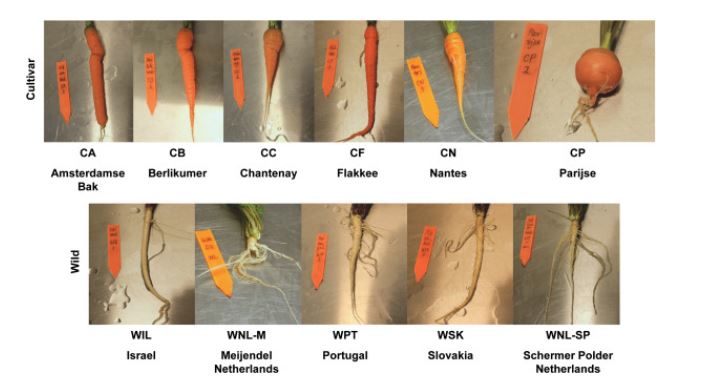 I'm not sure how familiar you are with biology so I described this not in that much detail about the genes and expression of them etc. If you would like to know this I would highly recommend to read these articles:

Not the answer you're looking for? Browse other questions tagged biochemistry botany food pigmentation or ask your own question.

19
Why does hair turn grey or white, and why does it happen later for some?
13
Why is mammal coloration so dull?
8
Why do apples taste sweeter at the bottom?
196
Why are so few foods blue?
13
Why don't we feel hungry after waking up?
5
Why do most plants reflect green and others other colors?
6
Why aren't leaves black?
1
What is “beto carotene” and how can it turn lakes pink?
0
Why do we need to grow plants to make food?