I've often wondered how squirrels -- specifically, eastern grey squirrels (Sciurus carolinensis) make their nests. Specifically, I've been curious about how they "weave" everything together to make these so called "dreys" stay together (and stay in the tree). 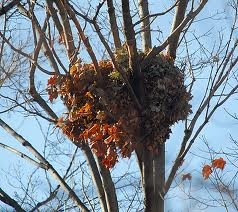 According to this site:

[squirrel nests are] constructed from various twigs, leaves, moss and other material. To start, twigs are loosely woven together to make up the floor of the nest. Next, squirrels create more stability by packing damp leaves and moss on top of the twig platform to reinforce the structure. Then a spherical frame is woven around the base, which creates the outer shell. The final touches include stuffing in leaves, moss, twigs and sometimes even paper to build up the outer shell of the new home.

I've tried finding a video (preferably time-lapse) of a squirrel nest being built to better understand/appreciate this animal home. However, I've thus far been unable to find such a video on the internet.

Does anybody have such footage or know where I can find some?

The third one was filmed by BBC. The fourth one is a closer look of the nest complemented with a fairly good analysis. The first two are reasonably good, but the third one is just awesome for your purpose!

It seems like they just pile the leaves on.

Not the answer you're looking for? Browse other questions tagged zoology ecology ethology mammals trees or ask your own question.

8
How large might a paper wasp nest become?
5
What is this bee/wasp nest?
29
How long before robin no longer needs the nest on my porch?
12
Did the construction of the Panama Canal lead to a huge change in the local marine ecology?
0
Black squirrel in France?
2
Why squirrel behaviour varies greatly throughout India?
1
Why are these nesting magpies building another nest