How are germ cells not reduced in number?

If germ cells produce haploid daughter cells by meiosis and are thereby "consumed" (where there was a germ cell there are then 4 daughter cells), where do the germ cells come from? I asked my biology teacher if they undergo mitosis prior to meiosis, but she said they don't and proceeded to give an unclear answer. Is this true? If so, are they regenerated from somatic cells elsewhere in the body?

My question basically is - if the germ cells of, say, the testes are dividing by meiosis to produce sperm, where are the germ cells coming from so that the testes don't shrink and ultimately disappear as they're converted completely into sperm?

In case of gametogenesis (let us talk about spermatogenesis) gametes are formed from meiotic division of Primary spermatocytes.

Why the testis doesn't run out of germ cells? (adaptation of your key question)

This process starts at puberty and usually continues uninterrupted until death, although a slight decrease can be discerned in the quantity of produced sperm with increase in age. (wikipedia)

The process of spermatogenesis in human: 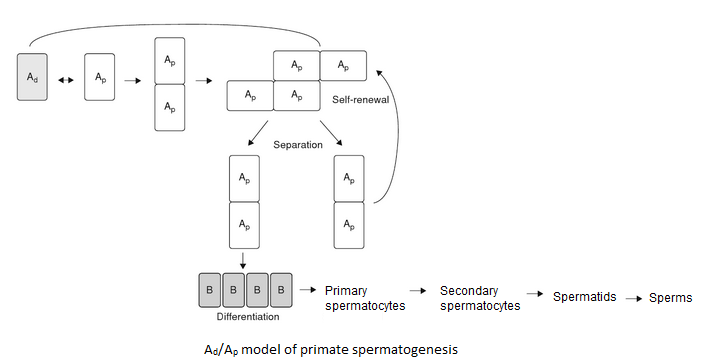 In non-primates like mice it is little different, the following diagram should explain it:

"How are germ cells not reduced in number?"

It does happen. Germ cells do eventually run out. It is called menopause in women. And age related infertility in men.

As for your question of where do germ cell come from? Much like were do muscles cells come from?, you have to be specific. Germ cells comes from the gonads (ovaries and testis) would be a simple answer.

They are coming from Spermatogonial stem cells (SSCs), cells that for the most part are immortal, and can replicate endlessly (well ~60 years anyway).

Not the answer you're looking for? Browse other questions tagged homework meiosis mitosis cell-division or ask your own question.

5
Meiosis vs. Mitosis
10
How is centriole number maintained during meiosis?
6
Mitosis versus Meiosis I: What's the difference?
5
Are surface area or volume conserved during cell division?
1
Do chromosomes line up as pairs in mitosis or meiosis?
1
Which is the correct term haploid daughter cells or haploid parent cells?
4
Germ cells vs. gametes