How are colors outside the standard RGB color scheme perceived? 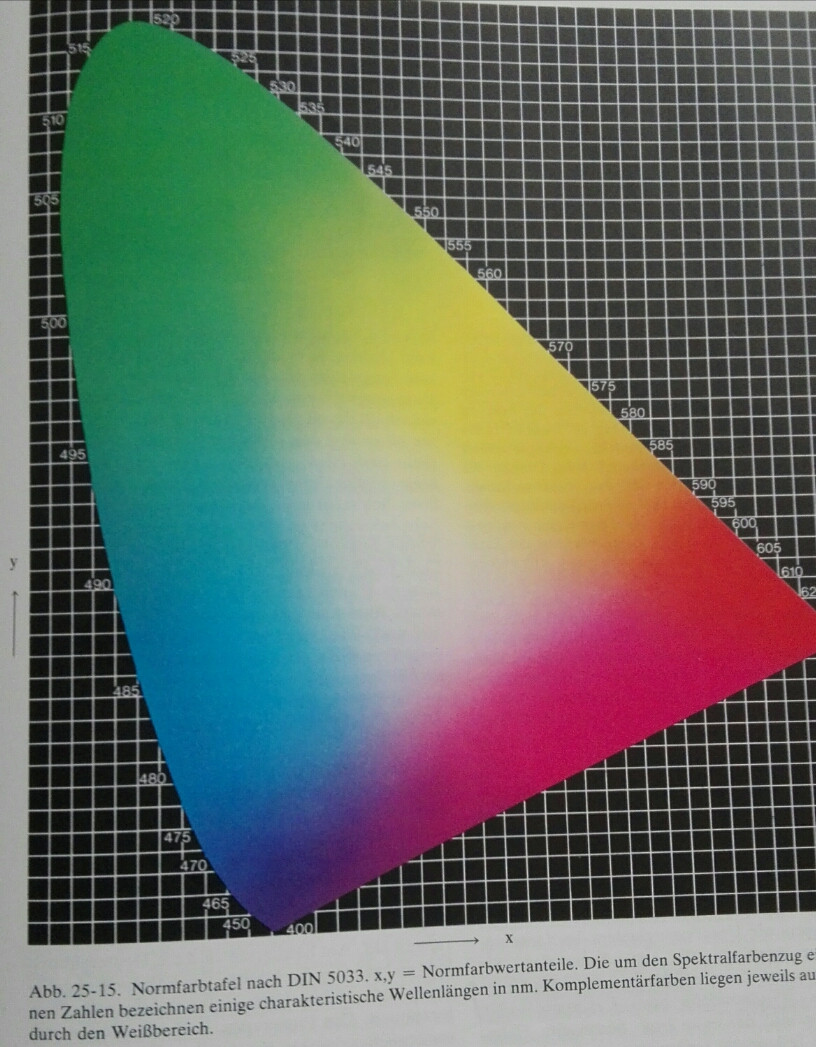 I found this image in a German book about biology. It's called DIN 5033 and represents the RGB color scheme.

What colors are outside the RGB scheme, i.e., in the black areas of the picture?

This question is both biology and physics I think (I guess it's biophysics! :) so I feel it's worth answering here.

First, we must recognize the difference between wavelength, which is just a physical property of light, and color, which is by definition a human visual perception. The color "red", for example, is a particular visual sensation humans have when encountering light of certain wavelengths. A color cannot be described by a single wavelength number, because the light we see in nature is never monochromatic; it's a complex mix of photons of all sorts of wavelengths.

As John's answer also pointed out, the human eye has three types of cone cells which responds to wavelenghts differently, determined by their absorption spectra (see picture below; R represents the rod cells, which I ignore here). Human color perception can be described as a mix of signals from the L (long wavelength, red), M (medium wavelength, green) and S (short wavelength, blue) cone cells. Mathematically, this is a linear combination $l \cdot f_L + m \cdot f_M + s \cdot f_S$ of the three spectra $f_L$, $f_M$ and $f_S$. The coordinates $(l,m,s)$ generate the LMS color space, which by definition contains all colors humans can perceive.

Now for your question: what colors are outside the RGB scheme?

This depends on precisely what you mean by "the RGB scheme" and "color". The picture you posted is actually not an RGB scheme but a two-parameter color model known as CIE 1931, which is roughly the same as the LMS color space, minus a light intensity parameter. If by "color" you mean the human visual perception, then by definition there are no colors outside the LMS space.

On the other hand, there are many kinds of light that humans cannot perceive correctly: you can imagine from the figure above that there any many cases where two different wavelength mixtures give the same response. For example, a mix of "red" and "green" light may result in the same $(l,m,s)$ values as "yellow" light, even though this is physically different. And of course, some wavelengths our eyes don't register at all, but we usually don't consider such wavelengths as "colors".

Finally, if by "RGB model" you mean the types of light that RGB devices like your computer screen can produce, then the answer is that there are many colors outside RGB. This because RGB devices use light sources for R, G and B with different wavelength profiles than those of the cone cells. Therefore, a typical RGB device generates only some subset of the LSM space. For example, in the figure below, the triangle represents the colors generated by mixing three monochromatic R, G and B light sources in the CIE RGB space, one of many possible RGB spaces. 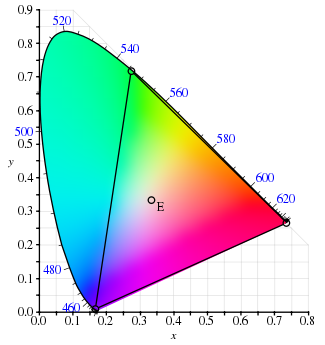 the colors we humans with our trichromatic eyes cannot see. 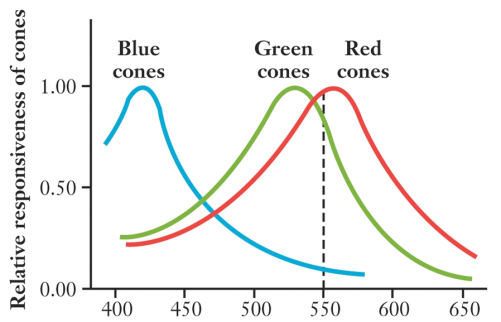 .Color for us is produced by a combination and comparison of cell activation. We can see every wavelength between about 4-700nm, we can't differentiate well near the ends or at all for that matter compared to non-mammals. for most of the RGB one wavelength activates more than one cell the comparison of activation creates a color, by activating more than one type of cone cell by different amounts. example activate both red and green but red more than green and you see orange, activate both the same and see yellow.

The deep purples or magentas however are weird and can be activated in two ways. Our red cones actually also pick up light in the 400nm range. so light close to 400nm activates both blue and red but not green (if our red cones did not have this bleed over it would normally be impossible to active red an blue but not green), but you can also trick the eye by using both red and blue light together which produces the same result of activation. that's why you have that purple smear across the bottom of the color chart.

But there are also wavelengths below 400 and above 700, Other animals can see part of these wavelengths as colors. There are animals that see colors in what we see as white light. Animals with more than three types of cones or with cones that are activated by different areas of the spectrum see different colors.

0
How RGB cones see other frequencies?