How long will norovirus live?

I hope this is the right place to ask. I subscribe to several Stack Exchange threads, and regard them as the best internet forum for genuine and credible answers.

I spent last evening talking to friend, at an Amateur Radio Club, who told me he has recently recovered from the norovirus. I was demonstrating an oscilloscope to him, and he also handled the handbook. All this is now in the holdall I used to carry it to the Club. I took all the precautions I could, like washing my hands and not getting them near my lips, nose etc. So, my question is: how long should I wait before opening my holdall, to be sure any infection there is dead?

Well, for him the virus is already likely at minimum levels within his body. If he's recovered (pass the fever phase) then his immune system has already dealt with the majority of the viral bodies in his system, since the peak of the immune response comes after the peak of the viral infection density (ignore B): 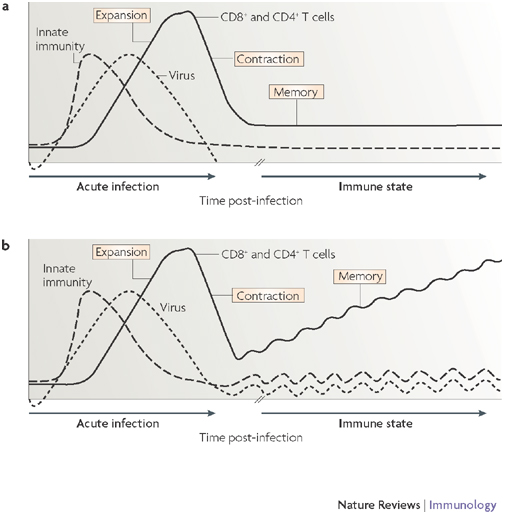 How much of the virus was left in his system to actually spread is hard to guess. Sometimes infections never truly go away, but merely become undetectable by conventional testing. However, if we're to assume that there's at least some norovirus left to transfer to you then you should realize that the greatest chance for exposure has already come and gone.

The moment you were in the same room together, talking in close proximity, shaking hands (if you did), or generally being close is the most likely source of any infection you could have picked up. However, while most virii don't survive well outside of the body, the norovirus notably bucks that trend. The Hawaiian Department of Health (PDF) notes that the virus can definitely survive outside the body for several days on hard surfaces (though it will not grow), can survive being frozen, and that it only takes about 100 viral units to cause an infection (which could fit a few thousand times over on a grain of salt). Scientific American also notes that norovirus can survive for months or years in sources of drinking water.

What you've already done is pretty much what you should do to avoid infection. You've washed your hands, refraining from mucous membrane contact, etc.

Ultimately how long you should wait depends on where the norovirus currently resides. A week should be sufficient if all of the norovirus is contained on the book or on other surfaces that you're not making contact with. However, if it's already had contact with your skin or mucous membrane, then you're either already fighting it off or you're about to become ill. Unfortunately it's a lot easier to expose yourself than contain something you can't see, as the Mythbusters have done a good job of showing (Video).

In all likelihood if he was still infected enough to transmit the virus to other people by the time you two started handling the same equipment and you didn't use gloves, you've probably been exposed. However, exposure doesn't automatically mean you get sick. If you're not sick within a week afterwards, you've successfully fought it off. So, congratulations, perhaps!

3
How long does Lentivirus take to express in vivo mouse neurons?
12
How long does the Ebola virus remain infectious on contaminated items or surfaces?
4
How long does immunity to influenza last when contracting the disease vs vaccination
3
How are viruses isolated?
2
Why does the rabies virus have such a long incubation period?
16
For how long would a flu-contaminated parcel be an effective disease vector?
1
How much heat for how long to Kill RHDV?
39
Why does vaccine development take so long?