I always have trouble differentiating the tissues in a vascular bundle. I specially cannot properly identify the vascular cambium and phloem. I know xylem vessel elements are large cells with thicker cell walls, that makes them clearly different from other cells in the vascular bundle. However, the difference between vascular cambium cells and phloem cells is unclear. I would like to know how I can identify these tissues accurately. A photomicrograph with marked borders would be appreciated along with explanation of cell appearance in these tissues. Thank you a lot.

Here is a single Helianthus (sunflower) vascular bundle, complements "The" Ohio State University. The xylem in a vascular bundle is generally the easiest to discern. The phloem tissues is always exterior to the xylem and the cells are generally more uniform and smaller than most of the xylem. Picking out the phloem is also more complicated by other cell types exterior to the xylem such as the "fibers" shown here. The phloem will always be interior to the sclerenchyma or collenchyma "fibers" when they are present. That is, the phloem is always adjoining, and exterior to, the cambium.

The most difficult to precisly locate is the vascular cambium since it is very thin. Notice in the diagram below, the relatively continuous line that is being pointed to by the dashed line from the label. As you go inward toward xylem and outward toward phloem, the smoothness of trying to trace a line parallel to the vascular cambium becomes much more "bumpy" as the cells are already beginning to differentiate. 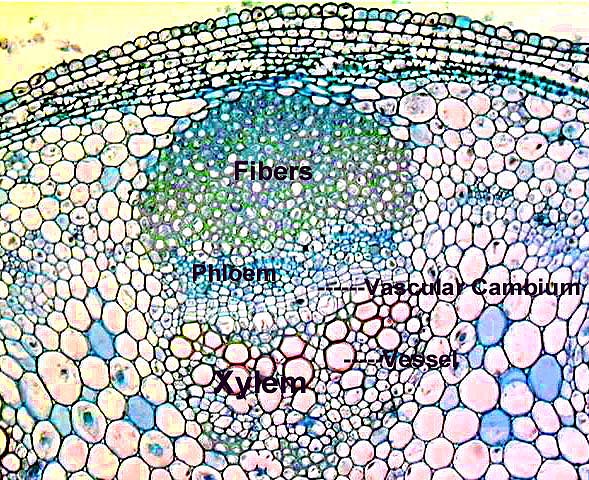 To find many more images on the web, search "vascular bundle labeled photo". You should investigate further, appearance of these bundles varies between dicots, monocots, roots, shoots and species.

Not the answer you're looking for? Browse other questions tagged cell-biology botany microscopy histology or ask your own question.

4
What is the proper quick freezing /snap freezing protocol for pancreatic tissue?
3
What is this tissue?
2
What is vascular cambium?
1
Histology tissue
0
Can formalin fixed tissue stored in absolute ethanol be used for histology?