Linking number: the linking number represents the number of times that each curve winds around the other.
Twist, called "twist", refers to the number of Watson-Crick twists in the chromosome when it is not constrained to lie in a plane

I read these explanations on Wikipedia and I understand the concept of this (supercoils have to form to compensate the "tension" etc..) however I'm not able to discriminate between these terms while looking at a picture.

Based on the formula I can easily calculate the twists in the right image. But I'm searching for a way to see/count the twists.
Question
What is the difference between the linking number and the twists (not from a formula perspective)?

This article (DNA Topology: Fundamentals by Mirkin SM) probably defines and describes linking number better than I ever could:

The fundamental topological parameter of a covalently closed circular DNA is called the linking number (Lk). Assume that one DNA strand is the edge of an imaginary surface and count the number of times that the other DNA strand crosses this surface (Figure 3). The algebraic sum of all intersections (which accounts for a sign of every intersection) is the Lk. Two important features of the Lk are evident from Figure 3. First, Lk is always an integer. Second, Lk cannot be changed by any deformation of the DNA strands, i.e. it is topologically invariant. The only way to change Lk is to introduce a break in one or both DNA strands, rotate the two DNA strands relative to each other and seal the break... Another characteristic of a circular DNA is called twist, or Tw. Tw is the total number of helical turns in circular DNA under given conditions. Since DNA is a right handed helix with 10.5 base pairs (bp) per turn, Tw is a large positive number for any natural DNA. Take a planar, circular DNA and try to locally separate the two DNA strands, i.e. to decrease the Tw. Since Lk cannot change, a decrease in Tw will be compensated by several positive writhes of the double helix (Figure 4). Writhing (Wr) is the third important characteristic of circular DNA, describing the spatial pass of the double helix axis, i.e. the shape of the DNA molecule as a whole. Wr can be of any sign, and usually its absolute value is much smaller than that of Tw. The above consideration can be formalized by the following equation: Lk = Tw + Wr. Note, that while Lk is an integer, neither Tw nor Wr should be such. Also, neither Tw nor Wr are topological invariants and their values easily change... 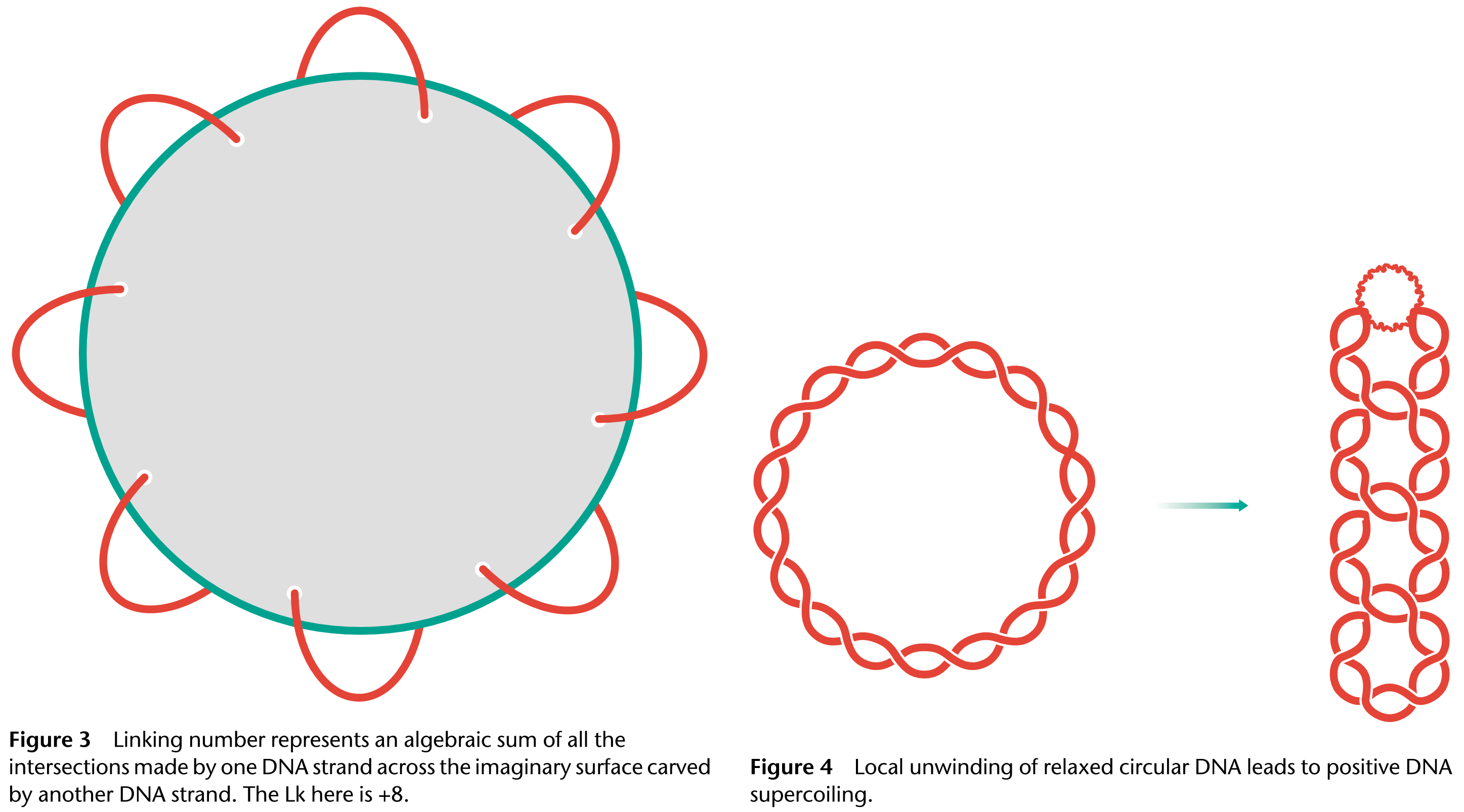 Linking number is simply the number of times one strand of DNA passes over the other. Compare this to:

You can, perhaps, think of twist as the passing over of strands within the helix and writhe as the passing over of strands when the entire helix crosses itself. Both twist and writhe involve strands of DNA passing over the other and so both contribute to the linking number. In the absence of writhe, linking number and twist are equal and both describe the same thing: the number of helical turns. However, in the presence of writhe, twist alone is insufficient to describe the topology of DNA because it doesn't account for the passing of the entire helix over itself.

Since twist is the number of helical turns, actually counting it in your image is not necessarily difficult, just time consuming. The image already has the twists numbered, and I've put a red do at every turn of the double helix. I've also circled, in blue, every point where the double helix passes over itself (writhe): 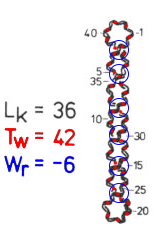 In that image, in may be difficult to visualize (and even understand!) that the strands only cross over each other 36 times (Lk), even though there are 42 helical turns (Tw). While twist and writhe are different modes of strand crossing, it is important to realize that they are interchangeable without breaking the strands. Let's consider a simpler example, where Lk = -1 (Wikipedia: DNA Supercoil): 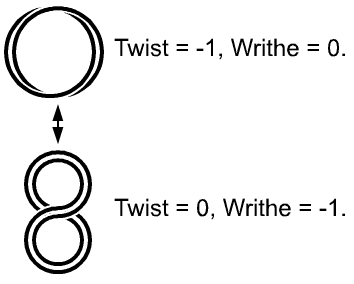 I hope that answers your question. Let me know if I misunderstood what you were asking or if anything needs clarification. You may also find my shoelace video on the topology of helicase-mediated DNA unwinding informative.

Writhe is the number of time a ds DNA wraps around itself.

From the diagram on the right, Writhe= - 6, you'll find 6 times the DNA crosses itself making 7 loops. [In negative writhe the upper stand moves from right to left around the lower strand (as in canadianer's diagram) and the opposite is positive writhe]

Not the answer you're looking for? Browse other questions tagged dna 3d-structure supercoiling topology or ask your own question.

7
DNA-DNA cross-linking with formaldehyde?
2
DNA Topology. Question on twists and writhes
1
Over winding vs under winding of a DNA
2
Topological property of DNA
6
Twist in the DNA double-helix
1
DNA Topology of two circular chromosomes
2
Misunderstanding about nucleotide biosynthesis
7
A little help understanding DNA supercoiling