According to this graph (from here): 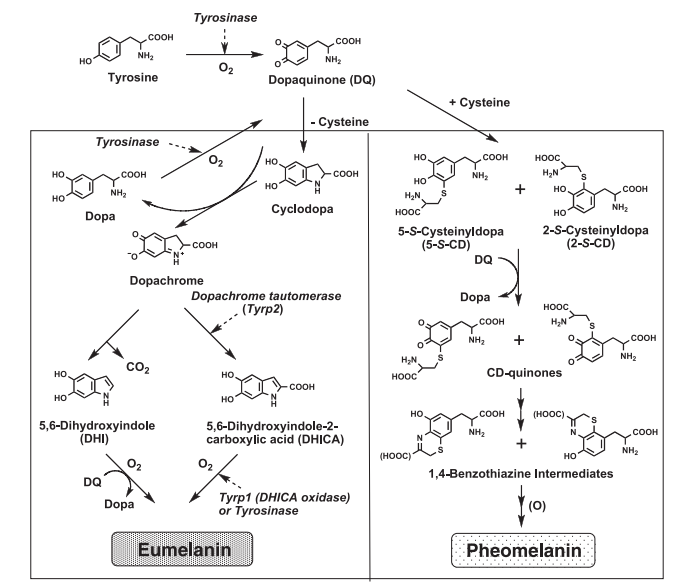 cysteine contributes to pheomelanogenesis, and having a high enough concentration of cysteine makes the shift towards pheomelanin instead of eumelanin. So my question is: theoretically, let's say I would feed my dog a cysteine supplement daily, would that change its coat color over time? If yes, how, and if no, then why not? What am I missing in this process?

Disclaimer: this is just an example, of course I do NOT intend to feed my dog anything at all, it's just a hypothesis. What I want to know is that raising cysteine/glutathione levels can really contribute to pheomelanin production? I know that theoretically, in lab tests a higher cysteine concentration means a higher pheomelanin production, but I am interested in actual living things. If this is possible, it can be a huge breakthrough. If you have the opinion that cysteine alone won't make the difference, than what will? According to the graph attached, that's the only thing making the difference.

Surprisingly, it is indeed possible! But, the fact is that the actual process is a bit more complex and might actually require more compounds along with cysteine to give such effects in living beings. First of all, see this image1: 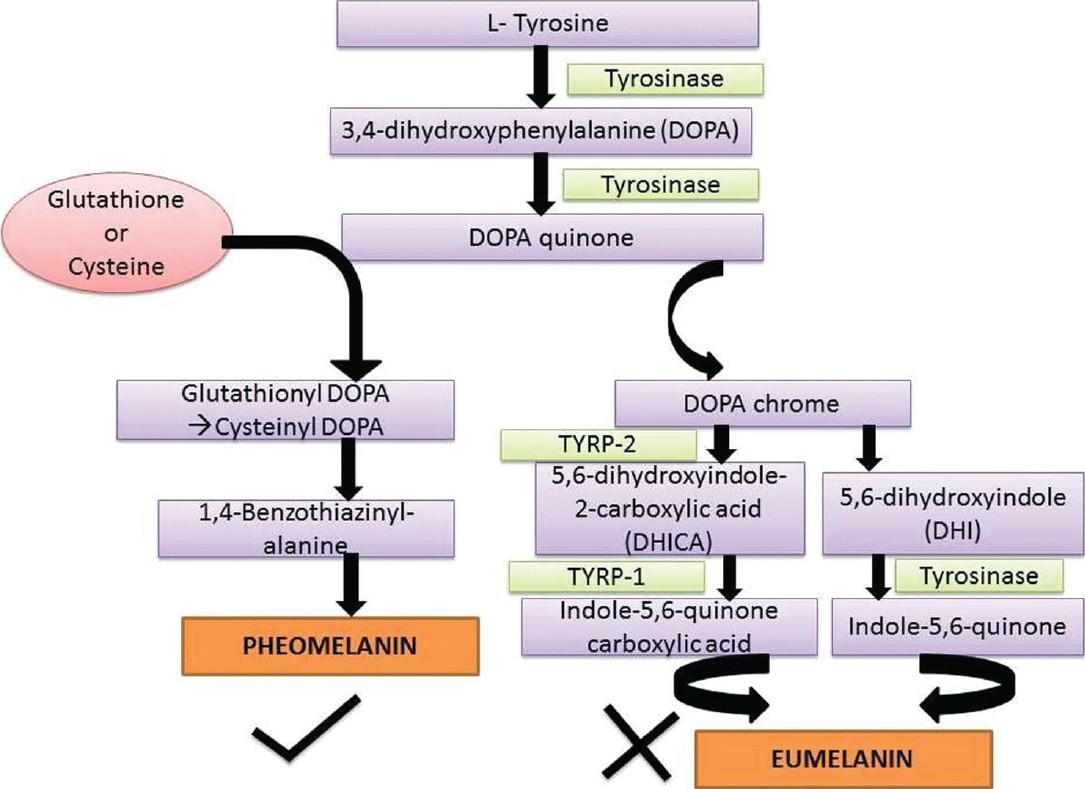 As is clear from the diagram, GSH (glutathione) is also a factor for pheomelanin production, along with cysteine. Another factor on which one might not pay heed is Tyrosinase protein expression. High amount of L-cysteine is thought to decrease the expression of tyrosinase in cells2 (but since I found just one article, I'd suggest to not pay much attention on this point).

Just to add, when it comes to gene regulation, then it seems that cysteine has some more effects too. As pointed out by @Chris, eumelanin production in skin is stimulated by a cascade which involves a receptor known as melanocortin-1 receptor (or MC1R). When activated by one of the variants of MSH, typically $\alpha$-MSH, MC1R initiates a complex signaling cascade that leads to the production of the brown or black pigment eumelanin6. Now, a research has concluded that 0.07 mg/ml concentration of L-cysteine greatly reduces expression of MC1R gene, thus literally leaving no way (not really) for eumelanin production7!

Thus, in short, it is not as simple as "Hey, you want a red skin tone? Here is some cysteine for you!" Cysteine, and other related compounds like GSH, have more complex effect on melanin production than just promoting production of pheomelanin over eumelanin. You can also have a look at this answer (by @Chris) for some more information.

EDIT: To tell where you're going wrong, I'll make two reaction flowcharts. First, this is (IMO) what you're expecting as an answer:

But this is what is actually happening: 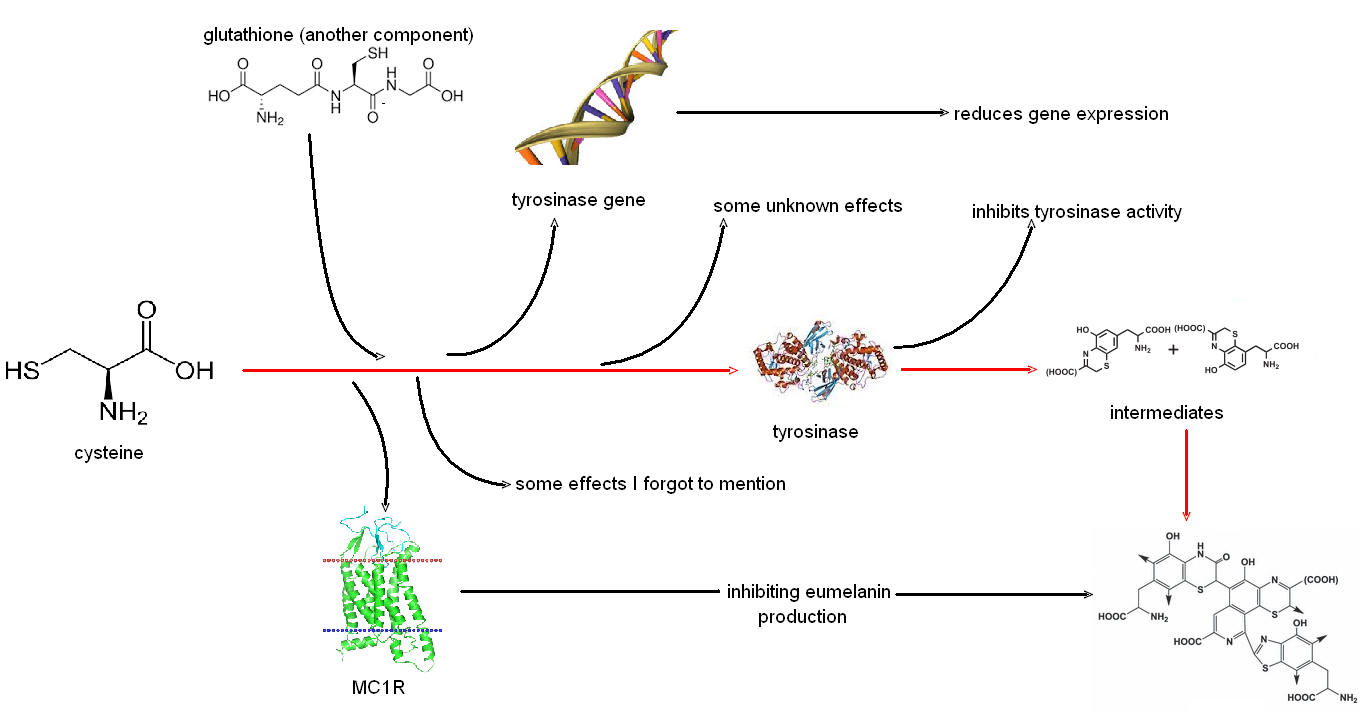 The red line is what we're interested in. But as you can see, the diagram is already quite complicated (and expected to get more complicated as more factors are discovered). So, giving a simpler explanation than this would be, very much, impractical or impossible.

Not the answer you're looking for? Browse other questions tagged biochemistry molecular-biology cell-biology pigmentation melanin or ask your own question.

9
What biological processes cause leaves to change colours in Autumn?
2
Can the colour of skin change with age
5
Is the Michael Jackson skin pigmentation disease realistic?
3
Enzyme Assay, absorbance change to concentration change
4
Why is hyper pigmentation the common aftermath of skin lesions and abrasions?
3
Pigmentation in Jaundice
6
Why is there no symmetry in pigmentation when comparing people north and south of the equator?
2
How does low cysteine conditions affect pheomelanin production?