Minor differences in morphology of a snake: Why designate it a different species?

I was motivated to ask based on an answer to another question that I read on SE-Biology:

You can differentiate this species [Ashok's Bronzeback (Dendrelaphis ashoki)] from closely related D. girii based on it having a longer "postocular" black line than D. ashoki -- in D. ashoki it stops shortly caudal to the eye...

When the differences are so minor (e.g. "longer "postocular" black line") what's the reason for designating them as two different species?

Is there a objective reason when to call them different species? Would those two not interbreed?

Note: I'm not just asking "If they interbreed why is it a different species?"

I'm more in the vein of asking: "If two species so similar are still different species why are they different? Is there an objective metric to draw the line at which point we differentiate as different species."

Can Eskimos be regarded a distinct species from Kalahari Bushmen based on morphological differences & geographic isolation? 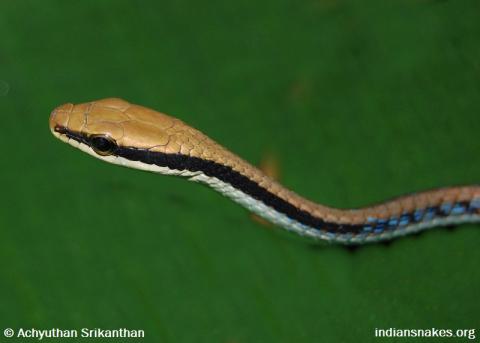 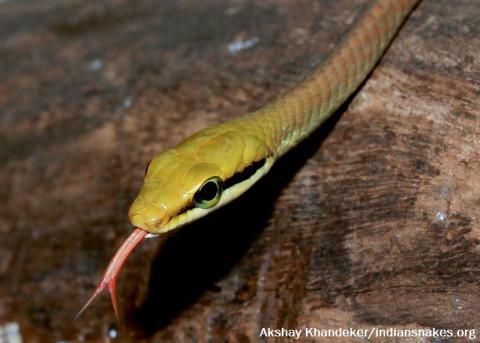 How do we know D. ashoki is a distinct species?

The key to this answer is in Vogel and van Rooijen, 2011a, the scientific article in which Dendrelaphis ashoki was first described. Before their work, these snakes were thought to belong to the species Dendrelaphis pictus. To test whether this was in fact the case, they compared 9 individuals of D. ashoki with 34 individuals of D. pictus, and found statistically significant ($p < 0.05$) differences in five morphological characters: SUBC (number of subcaudals), TAIL (tail-length), EYED (horizontal diameter of the eye), SUBL (number of infralabials touched by the first sublabial, left and right added) and STRIPE1 (ventrolateral stripe bright/dull/absent). Here's the statistical analyses they ran:

The authors didn't rely just on morphological evidence: they note that D. ashoki, which is found in the Western Ghats, is also geographically isolated from other populations of D. pictus, which are found in Northeast India, Myanmar and South East Asia. Therefore, they concluded (emphasis mine):

The distinct morphology and coloration as well as strong geographic isolation of the population from the Western Ghats imply a unique evolutionary history that does not allow application of either the name D. pictus or the name D. proarchos. Consequently, we describe this form, previously referred to as D. pictus, as a new species, D. ashoki sp. nov., endemic to the Western Ghats.

How do we know that D. girii is a distinct species?

For this information, we need to look up another paper published that same year, Vogel and van Rooijen, 2011b. Interestingly, the authors don't compare this snake with D. ashoki at all, but with Dendrelaphis bifrenalis:

Due to their double loreal shield, D. girii sp. nov. and D. bifrenalis occupy a unique position within the genus. A congeneric species with a double loreal shield has been described in the past, namely Dendrelaphis biloreatus (Wall, 1908). However, the presence of a double loreal in D. biloreatus appears to be based either on an anomalous specimen or on a misjudgement (Vogel & Van Rooijen, 2011b). Furthermore, D. biloreatus differs from D. girii sp. nov. and D. bifrenalis in its number of dorsal scale rows (13) and its number of ventral scales (190-199).

Not the answer you're looking for? Browse other questions tagged species herpetology snake or ask your own question.

90
How could humans have interbred with Neanderthals if we're a different species?
9
Indian Snake Species Identification
6
Can Eskimos be regarded a distinct species from Kalahari Bushmen based on morphological differences & geographic isolation?