Why is insulin given in type 2 diabetes?

For this reason "insulin insensitivity", or a decrease in insulin receptor signaling, leads to diabetes mellitus type 2 – the cells are unable to take up glucose, and the result is hyperglycemia (an increase in circulating glucose), and all the sequelae that result from diabetes $^{(1)}$

Type 2 diabetes is due to insufficient insulin production from beta cells in the setting of insulin resistance. $^{(2)}$

Isn't it illogical to give more of insulin for a deficit amount of receptors?

Seems like there is some confusion in the definition of type-2 DM itself. According to the American Diabetes Association:

If you have type 2 diabetes your body does not use insulin properly. This is called insulin resistance. At first, your pancreas makes extra insulin to make up for it. But, over time it isn't able to keep up and can't make enough insulin to keep your blood glucose at normal levels.

So the problem in type-1 DM and type-2 DM is quite same; both because of less insulin present than required, the difference being that in type-2 DM the cells need more insulin than normal. And that apparent deficiency of insulin is overcome by insulin injections. Also, the definition you cite doesn't say receptor deficiency anywhere, it just says decrease in receptor's response to insulin.

This is not quite possible yet. Increasing the number of receptors means increasing the gene expression for that receptor, something that is called 'upregulation'. Now, just to add, the cause of type-2 DM has been regarded to be downregulation of insulin receptors on cell surface by high concentration of insulin. See this article:

The process of downregulation occurs when there are elevated levels of the hormone insulin in the blood. When insulin binds to its receptors on the surface of a cell, the hormone receptor complex undergoes endocytosis and is subsequently attacked by intracellular lysosomal enzymes. The internalization of the insulin molecules provides a pathway for degradation of the hormone as well as for regulation of the number of sites that are available for binding on the cell surface. At high plasma concentrations, the number of surface receptors for insulin is gradually reduced by the accelerated rate of receptor internalization and degradation brought about by increased hormonal binding. The rate of synthesis of new receptors within the endoplasmic reticulum and their insertion in the plasma membrane do not keep pace with their rate of destruction. Over time, this self-induced loss of target cell receptors for insulin reduces the target cell's sensitivity to the elevated hormone concentration.

Now, coming back to the main point, it is not yet possible to inject transcription factors in every cell of body so that more and more receptors can be produced. It is possible in vitro, but not in vivo yet. However, it is possible to inject something else instead of insulin which might have similar effects on the body, something known as insulin agonist. Researchers are already trying to create insulin agonists, but haven't achieved much success. See this paper for example, in which they talk about a peptide S961. The problem here is that most of the molecules synthesized act as both agonist and antagonist based on different concentrations. That is why this field has not seen much success.

EDIT: As mentioned by @Don_S in comments, some drugs reportedly do increase insulin sensitivity and number of receptors in cells. Though they have indirect mechanisms for this, unlike insulin itself, but this works too (at least in vitro). One of them, thiazolidinediones, activates a nuclear receptor PPAR $\gamma$, which in turn increases transcription of proteins involved in glucose and lipid metabolism and energy balance. Another drug, pioglitazone, works even in vivo and has been suggested to work by activating receptor kinases and thus increase insulin sensitivity.

Thus, in future, it is very likely that type-2 DM patients would get prescriptions of such drugs instead of insulin injections, but not until there are more such drugs available and at an affordable cost.

This is true for the beginning of the disease. As a reaction to the reduced sensitivity of the cells in the body to insulin (and thus less uptake of glucose from the blood and a resulting hyperglycemia) the body produces more and more insulin to cope with this problem.

At some point the insulin producing beta cells cannot increase the production anymore and due to the insulin resistance this amount is not enough anymore. At this point insulin needs to be supplied to the body to ensure normal function and to combat hyperglycemia. See this figure for a schematic overview (from here): 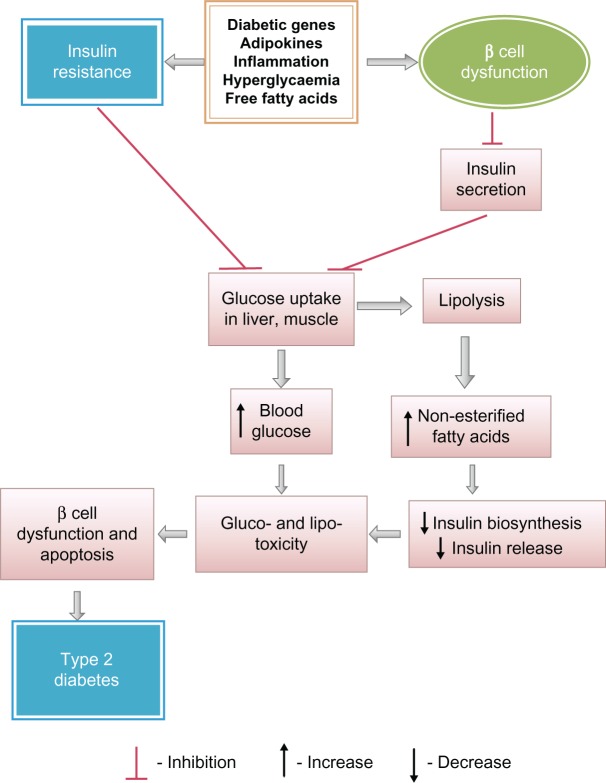 For more details see this paper:

Insulin is a "last resort" treatment for people with Type 2 diabetes—partly due to the unpleasantness of injections, but partly due to the fact that high insulin levels can worsen insulin resistance.

People with Type 2 diabetes are generally started on Metformin and/or advised on diet and exercise, and progress to other oral medication, before insulin is considered. However, the oral drugs can have significant side-effects, and since Type 2 diabetes is progressive, insulin can eventually become necessary.

That said, injected insulin carries the risk of hypoglycaemia (low blood sugar), and starting insulin treatment early, before pancreatic insulin production has been severely impacted, can help reduce this risk, as the pancreas can play more of a role in keeping blood sugars stable.

So, the simple answer is: insulin treatment is used because it works; reducing insulin resistance is preferable, but current drugs can only do this to a limited extent.

Not the answer you're looking for? Browse other questions tagged biochemistry pharmacology endocrinology medicine cell-signaling or ask your own question.

5
Is Leptin Stimulated by Insulin Alone?
2
Insulin and monoclonal antibody production
6
Diabetes-diabetes comorbidity
2
How is insulin transported in vivo in mammals?
1
Why warfarin is given as racemic mixture?
4
Why do patients with type 2 diabetes not show the body wasting seen in type 1 diabetics?
4
Why do beta-1 and beta-2 adrenergic receptors result in two completely different effects (though both use Gs pathway)?