Could someone explain me in detail what is meant by "TF expression LEVEL", what does it represent and how is it measured? This is for example used in figure 3 of this paper: A census of human transcription factors: function, expression and evolution.

Transcription factors are an important cellular regulatory mechanism to control gene expression. The expression of TF is important for cell function, differentiation and also for responses to environmental signals.

We know quite a number of different TF, but only for a little part of them their exact function (in terms of which in which tissues they are expressed, when and which genes they regulate) and this is where the paper you read comes in.

They test for the expression of roughly 1400 TF in a number of different tissues, to see where they are expressed (figure 3 from the paper): 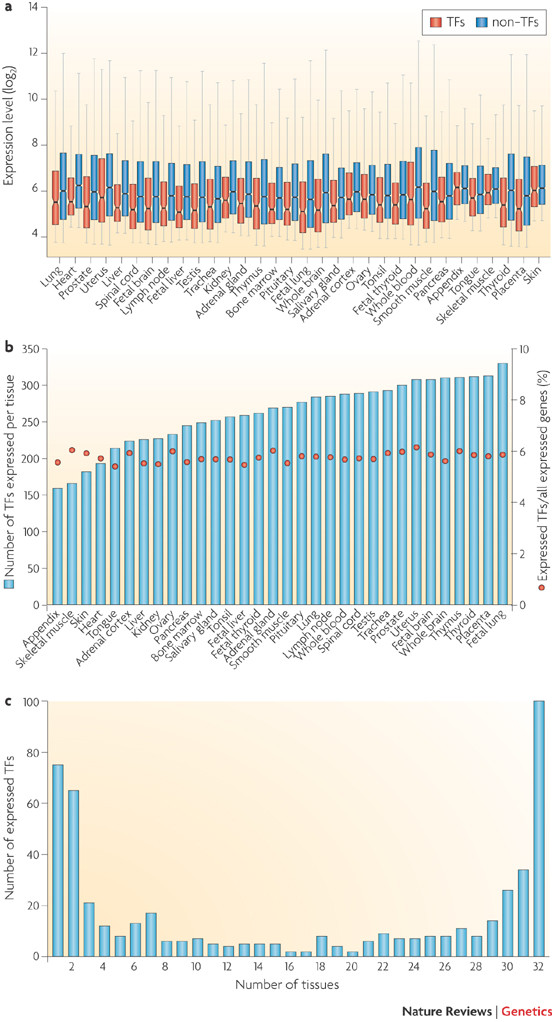 The group used micro-arrays to analyze the expression levels (in this case how much transcript from the genes is made assuming that this also translated). The quantification was done using the signal strength of the array - the more transcript you have, the stronger the signal is.

The expression of a certain TF in a specific tissues shows its involvement in gene regulation (either direct or indirect) there.

Not the answer you're looking for? Browse other questions tagged genetics molecular-biology molecular-genetics statistics or ask your own question.

8
A mathematician's confusion regarding parametric $t$ tests for gene expression data
3
Chromatin shearing: what is it and what are the effects of high-sensitivity?
2
Comparing gene expression levels between control and disease at different time points
1
How do signal transduction pathways utilize transcription factors to express a specific gene?
4
Are all genes transcribed in differentiated cells?
0
What is meant by “Expression” of Non-Coding RNA?
0
In microarray normalization, why is the normalization factor this?
3
What Ultimately Controls DNA Transcription?
4
How do enhancers induce transcription?
0
Meaning of “gene expression heterogeneity” of embryonic stem cells