Which DNA elements belong to the definition of a gene?

I see a lot of different DNA elements mentioned as part of a gene (talking about eukaryotes):

The length of DNA following the promoter is a gene and it contains the recipe for a protein. (video)

This implies that the promotor is not part of the gene.

This actually defines a gene without enhancers/silencers

Question
Is there an accepted gene definition regarding the DNA elements? Thus which sequences like promotors, enhancers, silencers etc. are considered part of the gene?

Basically, a geneic region starts from the transcription start site (TSS) and ends at the terminator (or polyadenylation/cleavage site in eukaryotes). If a gene gives rise to multiple transcripts, those which have similar products (no frameshifts) but different TSS/terminators, we should consider the geneic region as a union of all the primary transcripts produced from that site.

There is a relatively old article on this topic: What is a gene, pose ENCODE? History and updated definition. It summarizes that:

There are three aspects to the definition that we will list below, before providing the succinct definition:

This can be concisely summarized as:

The gene is a union of genomic sequences encoding a coherent set of potentially overlapping functional products. 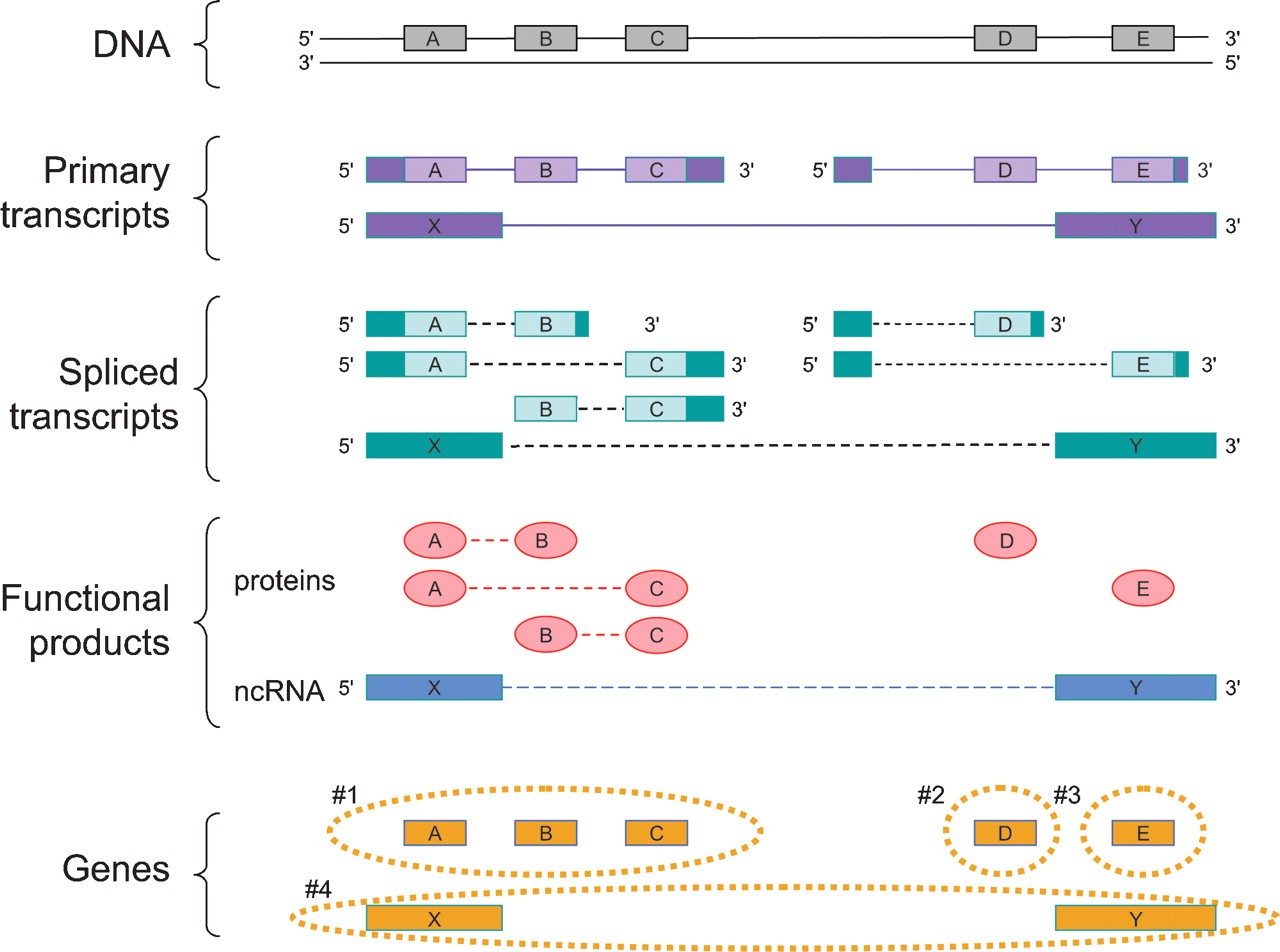 My summary is that a gene, if it codes for a protein, would be a union of all primary transcripts that produce identical proteins (originating from transcripts with different TSS/terminators) or splice variants. Ideally, all the different transcripts produced from the locus would have the same promoter.

Overall, it appears that a common promoter is imperative for considering the different products under the same gene because if two products are produced from different promoters then we consider them as products of overlapping genes.

Whether we should consider the promoter as a part of a gene is an open debate.

It depends. There are two broad definitions which work.

The more common definition of a gene is the transcribed portions of DNA, a gene begins at the transcription start site and ends at the Poly-A site. This is common when discussing mRNA, lncRNA, tRNA. It's what most scientists refer to when they say the ACTB gene or IRF5 gene or something.

An older and arguably better definition of the gene from Thomas Morgan is a unit of heredity, that when mutated results in a phenotype.

The second definition doesn't say anything about transcription and would be inclusive of things like promoter/enhancer mutations. From a molecular biology stand-point is more difficult to define. It's more useful for genetics because you're interested in how a phenotype is inherited and it's etiology, not how an a species of RNA functions.

98% of the time when people discuss genes they mean the former definition, but this is still an actively debated issue and as we learn more about genetics it will change.

Not the answer you're looking for? Browse other questions tagged genetics molecular-genetics terminology genomics gene or ask your own question.

1
Is gene only the portion of a single strand which codes for a particular protein?

8
Smallest unit on which selection can act
1
DNA and gene activation
1
Are the genes for transcriptional factors close to their targets in the genome?
1
Is gene only the portion of a single strand which codes for a particular protein?
2
Is the promoter region of a gene transcribed?
2
What is the difference between a response element and a enhancer?
2
Definition of the different DNA regions
0
Which parts of the cerebral cortex don't belong to the neocortex?