What is a tuckahoe?

I'm working on a book about names and nicknames of the fifty states of USA. I came across the following in an older reference:

The name Tuckoes is a corruption of the common term Tuckahoe, or Tuck-a-hoe, derived from the word Tauquauh, an Indian word of the Mohican dialect meaning bread. This word was used by the early settlers for the Schlerotium giganteum, called Indian bread, a curious truffle-like growth formerly used by the poor people of the State for food when poverty drove them to it. It is said to grow several feet under the ground and to have­ neither stems nor leafy appendages. In appearance it resembles a brown loaf of coarse bread. This nickname is applied both to the North Carolinians and to the Virginians.

I did a little research and wrote the following:

However, I'm not sure if that's really correct. There's some confusion regarding common names, Latin names, or both.

So I'd like to ask if my sentence is correct. If it isn't, can anyone suggest a better way to describe a "tuckachoe"?

No, your Tuckahoe species is likely Wolfiporia extensa. 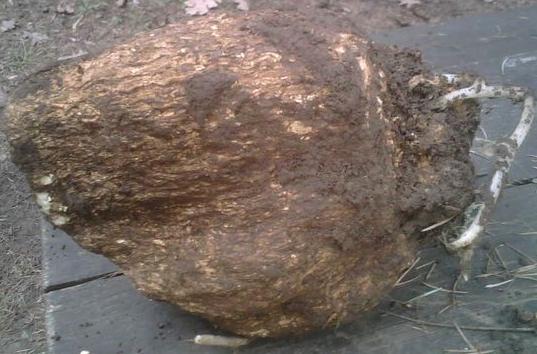 Well, it sounds like there is some colloquial contradictions.

It could also be Peltandra virginica, which also has the common name tuckahoe.

This is an emergent perennial herb growing from a large rhizome and producing many large leaves. An individual leaf may have a petiole nearly a meter long and a blade half a meter in length. The leaves are quite variable in shape and size, but they are often generally arrowhead-shaped. 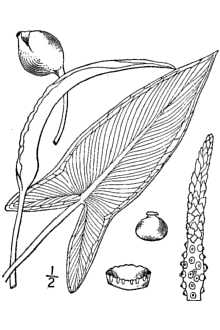 However, it seems unlikely that this plant is the same as the "fungus-like" structure lacking leaves and stems that your source cites.

According to John Torrey's series of 1819 letters about Tuckahoe printed in "The Medical Repository of Original Essays and Intelligence..." (volume vi; Mitchill et al., 1891, pp 34-44)

This substance was first described by Clayton in his Flora Virginica: it is there called Lycoperdon Solidu...

Barton...mentions that the roots of the Smilax China [pseudo China] are used as food by the Southern Indians : but whether they are the same as the Tuckahoe, we can only conjecture.

...it is also believed by the natives in the South to be the roots of the Dioscorea villosa...

[Based on its] arrangement the Tuckahoe must be considered as a Sclerotium...Our Sclerotium is so distinct from any described [previously] by Persoon, that I propose it as a new species, under the name of S. giganteum

So, given all that: 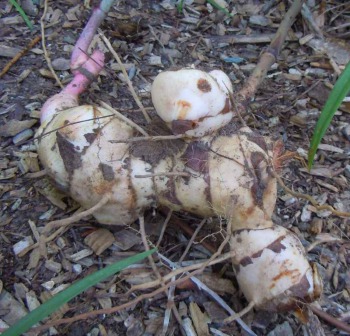 So let's turn to "Some Characteristics of the Southern Tuckahoe" by John A. Elliott (1922) in Mycologia, Volume 14, who refers to the tuckahoe as Pachyma cocos:

...suggested Pachyma cocos may... be connected with the genus Lentinus.

If we look up Pachyma cocos (i.e., "Pachyma cocos Fr. (1822)") it is now known as Wolfiporia extensa, and has the following description:

Wolfiporia extensa (Peck) Ginns (syn. Poria cocos F.A.Wolf) is a fungus in the family Polyporaceae. It is a wood-decay fungus but has a subterranean growth habit. It is notable in the development of a large, long-lasting underground sclerotium that resembles a small coconut. This sclerotium called "(Chinese) Tuckahoe" or fu-ling, is not the same as the true tuckahoe used as Indian bread by Native Americans, which is the arrow arum, Peltandra virginica, a flowering tuberous plant in the arum family. W. extensa is also used extensively as a medicinal mushroom in Chinese medicine.

Wait, Chinese??! I could have sworn we were on the right track!

Your Tuckahoe is likely the sclerotium that belongs to what is now known as Wolfiporia extensa. 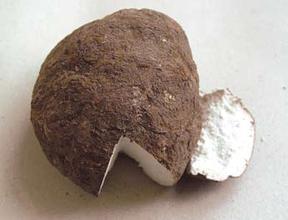 Not the answer you're looking for? Browse other questions tagged botany species-identification terminology mycology or ask your own question.

8
What is this mushroom?
7
What are those huge plants / fungi on trees called?
3
What type of mushroom/fungus is this?
0
What is happening to this tree?
6
What kind of lichen is it?